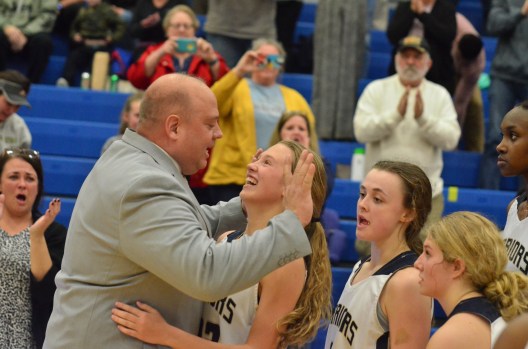 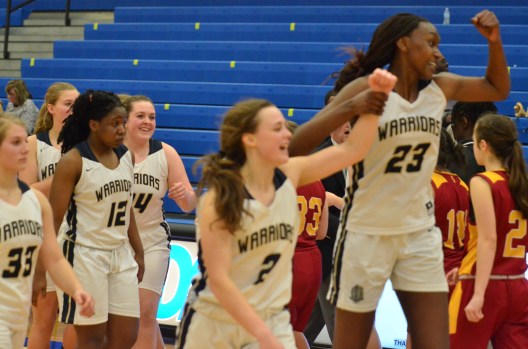 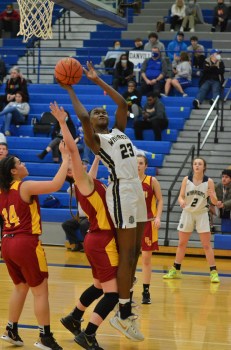 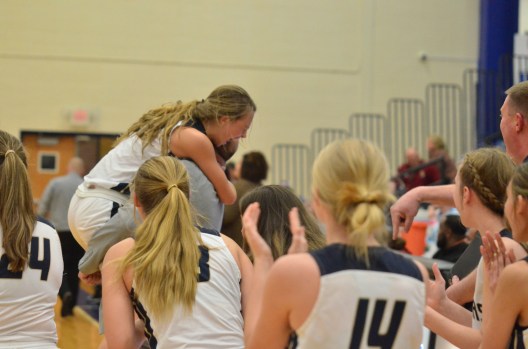 Victoria Inmon of Danville Christian is lifted into the air by her father, coach Billy Inmon, as the Lady Warriors celebrate following their victory over Garrard County on Tuesday. - Photo by Mike Marsee 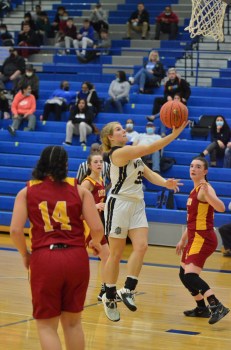 Braxtyn Heck of Danville Christian gets through the Garrard County defense for a layup during the second quarter Tuesday. - Photo by Mike Marsee 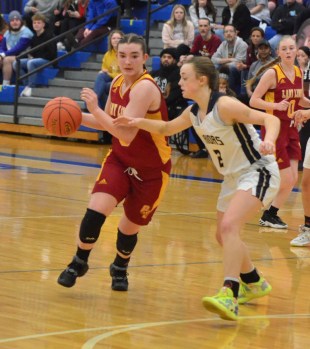 Addison Pevley of Garrard County drives toward the perimeter against Danville Christian’s Maggie Bentley during the fourth quarter Tuesday. - Photo by Mike Marsee

There may come a day — and it might be soon — when getting to the regional tournament is a routine occurrence for the Danville Christian girls.

But there will never be another first time.

So while the Lady Warriors didn’t raise a trophy Tuesday night, everything else that happened in the moments after their victory was characteristic of a championship celebration.

For this night, for this season, the 56-53 win over Garrard County in a 45th District Tournament semifinal at Danville meant as much to them as any championship.

“It means everything,” DCA guard Victoria Inmon said. “I just praise God for this opportunity, especially for our little school. It’s been amazing, and God has worked through us through everything.”

The Lady Warriors rallied from an eight-point deficit in the fourth quarter for the win that gave them a spot in the 12th Region Tournament for the first time.

“We were panicked for a little while there,” DCA coach Billy Inmon said. “They haven’t played from behind enough to be calm, and we’ve still got a lot of inexperienced kids. But they just showed a whole lot of heart, and we’re very thankful for the win.”

Billy Inmon said he’s also happy to pay the dry cleaning bill after his players soaked his suit during their locker room celebration.

DCA (18-7) advanced to the district final, where it will play Danville at 7 p.m. Thursday, and is guaranteed a spot in next week’s regional at Lincoln County.

“It’s a great opportunity,” Victoria Inmon said. “We’ve never had this opportunity before, so I am just very thankful.”

Her father said he’s happy to pay the dry cleaning bill after his players soaked his suit during their locker room celebration.

“They came in and drenched me. I just went like this,” Billy Inmon said, outstretching his arms, “ and let it hit.”

Victoria Inmon hit a 3-point shot from the top of the key that tied the game at 53-all with 56 seconds remaining, and Grace Mbugua gave the Lady Warriors the lead on a layup with 32 seconds left.

Garrard (14-13) missed two 3-point tries in the final 14 seconds, and Inmon hit one of two free throws for the final margin in a game marked by poor shooting on both ends of the floor.

DCA shot a respectable 37 percent from the field but missed all seven of its 3-point tries in the first half and finished 4 for 15 from 3-point range and 14 for 25 at the free-throw line.

Garrard’s shooting, however, was even worse. The Lady Lions shot 28 percent from the field and went 2 for 16 from 3-point range and 17 for 37 at the foul line.

There were seven lead changes in the first 16 minutes before Garrard outscored DCA 17-8 over a seven-minute span to take a 48-40 lead with 6:22 to play, and Victoria Inmon said she thought the Lady Warriors’ dreams of reaching the regional might have to wait another year.

“Oh, yeah, I was thinking the whole time, ‘What are we doing?’” she said. “I definitely thought that we were going to lose it for a little bit, but we had to dig in and focus on the goal. I think we just really leaned on each other and our Lord and were just grinding it out.”

The result was the second postseason win since DCA became eligible for KHSAA tournaments in 2020.

The Lady Warriors, in only their third year of KHSAA postseason eligibility, defeated Garrard in a first-round game in last year’s district tourney before falling in the semifinals. This season, they avoided the first round game by earning a No. 2 seed in a regular season that included five district wins and the 12th Region All “A” Classic championship.

“With the season that they had, I think they felt like anything but a regional appearance would be a letdown, and we just could not hit the broad side of a barn,” Billy Inmon said. “And when you can’t shoot free throws and you can’t shoot 3-pointers you usually don’t win, but their defense was pretty spectacular.”

Mbugua led DCA with 20 points and 22 rebounds. She had 10 boards in the fourth quarter, when the Lady Warriors outrebounded the Lady Lions 15-11.
Garrard got 20 points from Addison Pevley, who scored 16 in the second half, and 17 from Alaya Quisenberry.
The Lady Lions got 17 rebounds from seventh-grader Amauri Blackford, 10 from Jaden Naylor and nine from Pevley to outrebound DCA 47-42.
McCulley said he was proud of what the Lady Lions accomplished this season — they doubled their win total of a year ago — and what they’ve done in the three years he has led the program.
“These kids bought in from day one … and made Garrard County Lady Lions basketball respectable again, where we’re playing in games that mean something,” he said. “I told them, ‘You’ve gotten us here, now let’s see if the next bunch can take us a little further.’”
Victoria Inmon sank a 3 with 5:14 remaining that capped a 6-0 run and pulled the Lady Warriors within 48-46.
Garrard regained a 53-48 lead with 2:10 to play on a putback by Pevley, but Mbugua answered with a basket from the block and Inmon buried the game-tying shot from the top of the key a minute later.
“I was just thinking to be aggressive,” she said.
Tristan Himes scored 10 points, Victoria Inmon had nine and Maggie Bentley had eight for DCA.
Billy Inmon said the win is significant for DCA because it gives the Lady Warriors not only another milestone in the growth of the program but also another opportunity to impact younger girls in their school.
“I told the girls you can be thankful for another platform,” he said. “We’ve got a lot of young kids there at the school that are looking up to them that (the players) are mentoring, and there’s a good relationship there. It’s so nice to be able to see these high school kids that really do love those kids … and every time we get another platform it becomes greater.”
Before they take the regional stage they must deal with Danville for the fourth time this season. The Lady Warriors beat the Lady Admirals 55-51 in the All “A” regional but barely matched that point total in the two subsequent meetings, which Danville won 50-35 and 48-24.
“They’re a great team, a veteran team, and it’s in their place,” Billy Inmon said. “We know were going to have to handle their ball pressure and their press, and if we can do that, then maybe we’ve got a chance. If we can’t handle their pressure, we have no chance.”
45th District Tournament
At Danville