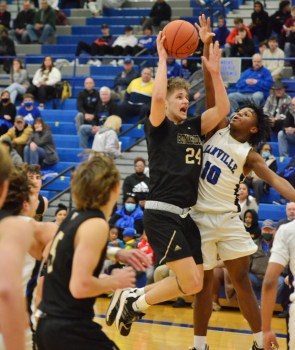 Cruise Wilson (24) of Boyle County goes airborne for a shot against Danville’s Demauriah Brown (10) during the first quarter Wednesday. - Photo by Mike Marsee 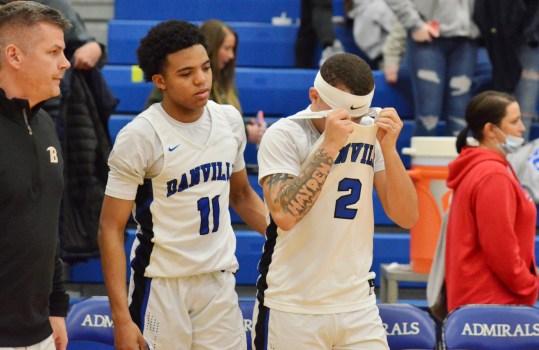 Dante Hayden (2) of Danville is consoled by teammate Jalen Dunn following the Admirals’ loss to Boyle County on Wednesday. - Photo by Mike Marsee 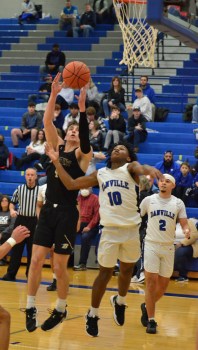 Hagan Webb of Boyle County gets into the lane for a shot against Danville’s Demauriah Brown (10) during the first quarter Wednesday. - Photo by Mike Marsee 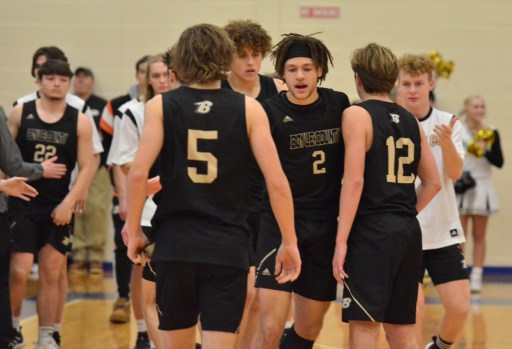 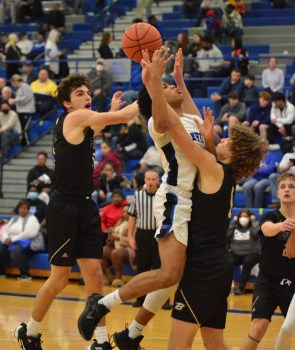 Danville ruled the first half, but the second half belonged to Boyle County.

It took some time Wednesday night for the Boyle boys to turn the tables, but they attacked the basket and fought their way through foul trouble in the final two periods to defeat Danville 76-69 in a 45th District Tournament semifinal at Danville.

The Rebels used a 22-2 run to launch themselves into the lead in a second half in which they shot a sizzling 68 percent from the field.

“I thought we’d settle down and make us a little run. It was just a matter of whether we could get stops,” Boyle coach Dennie Webb said.

Boyle (22-6) defeated its crosstown rival for the third time in as many games this season to advance to the district final and clinch a spot in next week’s 12th Region Tournament. The Rebels, who have won six straight games, will play Lincoln County for the district title at 7 p.m. Friday.

Webb said the Rebels outlasted Danville (16-15) perhaps because of and perhaps in spite of a defensive strategy intended to wear the Admirals down.

The Rebels’ defensive pressure didn’t work so well in the first half, when Danville shot 52 percent from the field, but it may have taken a toll in the second.

“I put us in a tough spot,” Webb said. “We went in thinking we would press a little bit and maybe wear them down a little bit, and it might have backfired on us by letting them get some easy ones early. … We kind of backed off (in the second half) and made them work a little bit. The second half made me feel a lot better about the call we made there.”

Boyle guard Hagan Webb said he thinks the pressure did begin to take its toll as the Rebels began their decisive run midway through the third quarter.

“With our press defense they got worn out, and finally in that fourth quarter we were like, ‘All right, we’ve worn them down. Let’s just lock up in our half-court man-to-man and see where it takes us,’” Hagan Webb said.

“We just quit getting stops,” Danville coach Ed McKinney said. “(The game) was pretty loose offensively … and you’ve got to keep scoring. They’re one of the best two or three teams in the region, so you’re not going to win it defensively. You’ve got to score the ball, and they take you out of stuff.”

The Rebels scored 24 points in the paint and got to the free throw line 11 times in the third and fourth quarters.

They led by as many as 18 points but hit only seven of 14 free throws in the final 3:09 and allowed the Admirals to get as close as seven points in the final minute.

Luke Imfeld led Boyle with 25 points but was on the bench for long stretches of the second half and fouled out with 3:04 to play. Another starter, Jakei Tarter, fouled out at the 4:35 mark, leaving seniors William Carr, Hagan Webb and Cruise Wilson to lead the way.

Those three players combined for 34 points in the second half. Hagan Webb finished with 18 points, Carr with 15 and Wilson with nine.

“We basically played the second half without two starters, but it’s a credit to all the other guys,” Dennie Webb said. “That’s what seniors should do. They should not want to lose that one and stay hungry, and they made plays.”

“Kason and Jack really stepped up tonight,” Hagan Webb said. “That was huge by both of them, and I’m really proud of them.”

Hayden hit two 3-pointers and Jarius Bryant had two layups in a 12-0 run that gave the Admirals a 22-14 lead early in the second quarter.

Boyle tied the game at 26-all after a run of seven unanswered points by Imfeld, who was 7 for 13 from the field and had 18 points in the first half. However, Danville pulled out to a 33-27 lead in the final minute of the first half.

Danville returns a number of young players who lacked experience when the season began, and McKinney said they will benefit from a better understanding of what it takes to win at this level.

“They see just how competitive varsity basketball is,” he said. “It’s just hard to come out of any game (in this district) with a win. I think the thing you learn is, ‘Oh, gosh, I’ve got to get in the weight room, I’ve got to be a better shooter, I’ve got to get quicker. It’s a lot harder than I thought it was.’”

While the Admirals look ahead, the Rebels will return Friday to try to win their first district title since 2018. They split their two games with Lincoln this season, winning 43-40 at home and losing 49-41 on the road, and the teams have split eight games since Dennie Webb became Boyle’s coach in 2019.