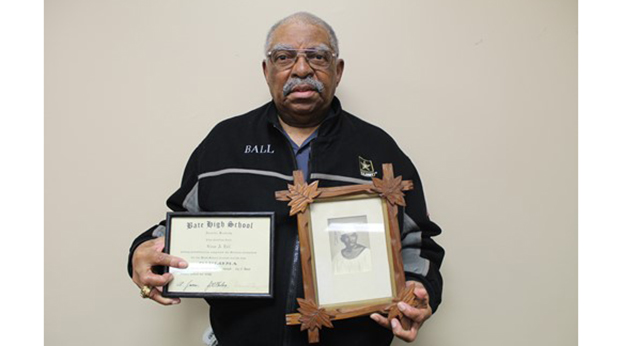 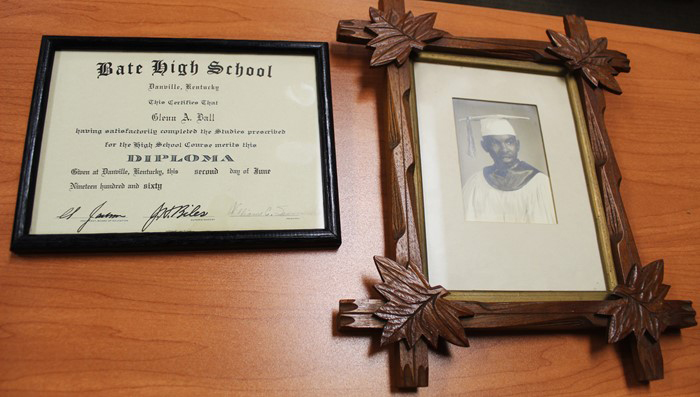 Pictured are Glenn Ball’s diploma from Bate High School where he was a graduate in the class of 1960, and his senior photo.

Though he graduated from Bate High School back in 1960, Danville Independent Schools Board of Education Vice Chair Glenn Ball still keeps his high school diploma hung up on his wall to this day.

This is his first term with the Board, and he’s been Vice Chair for a little over a year.

At Bate, Ball started school at 5 years old. Grades 1-12 were all under one roof, he said. Back then, it was a school for Black students.

“It was all just one big family,” he said. “The teachers knew you by the time you got to them. As you progressed through, they knew you were coming and who you were and everything.”

He chuckled and said, “You didn’t want to get in trouble, because the teachers knew the parents.”

The building went through several expansions over the years and eventually had two stories, a brand-new cafeteria and was one of few Black schools that eventually had a gym.

Black students from all over Boyle County went to Bate. During Ball’s sixth grade year, most students lived out in West Danville, and eventually a bus route came to that end of town. Before, students walked or rode with someone. One bus driver drove three routes, both out into the county and within the city limits.

Ball played in band for eight years, was in choir for four years and also played basketball.

“The fun part was, we were one of the few schools around here that had a band,” he said.

The band traveled around to other schools and played.

“Going to other schools playing basketball and football was always fun,” he added. “You got to meet your friends and everything.”

For his graduation ceremony, he said typically there were a few traditions each year. For example, generally the baccalaureate ceremony took place on a Sunday afternoon, and local Black preachers gave the message during that portion. The commencement was typically done by someone not based in Danville.

“Another thing that was interesting is all senior classes put on a play,” he said, which he participated in the year he graduated.

“I kept everybody laughing when we did that play.”

A few memories he has of his time at Bate was that the chorus group was taught by a first-grade teacher named Margaret Andrews, who impressively taught four-part harmonies with no sheet music for the students.

Another is that as a student, he loved aviation and airplanes. At the time, the only nearby school that had an aviation program was the University of Kentucky, he said.

William Summers, principal at the time, found out that a university then named Tennessee A&I (Agriculture and Industry) University, which was a HBCU (which stands for Historically Black Colleges and Universities), had an aviation program.

When Ball got the program information from the post office and needed his transcript, Summers already had his transcript ready for him — he had known that university was where Ball would end up.

After college, Ball enlisted in the U.S. Army and served in Vietnam from March 1966 to March 1967. At one point, he was stationed at the same base as Jesse Adams, another Bate graduate from the same graduating class, for four months.

Ball had taken two years of typing in high school, and at the time, typing was a cherished skill in the Army. He was an aircraft mechanic and administrative specialist during his time serving in the Army.

Ball first fell in love with planes at his house on Lebanon Road as a child, where he saw a plane crop dusting in a field of tobacco from his front yard and decided he wanted to fly a plane like that one day.

Sure enough, Ball went on to get master’s degrees in aerospace education and aircraft maintenance management, and he got his commercial pilot’s license and aircraft mechanic license. He has held many jobs over the years in several states, including for Eastern Airlines, as an instructor at Tennessee State University, and at the Kennedy Space Center, where he worked on pieces for a space station. He also developed a grid map for the Danville-Boyle County Airport, as well as another airport.

Ball came back to Danville in 2016, where he has lived ever since.