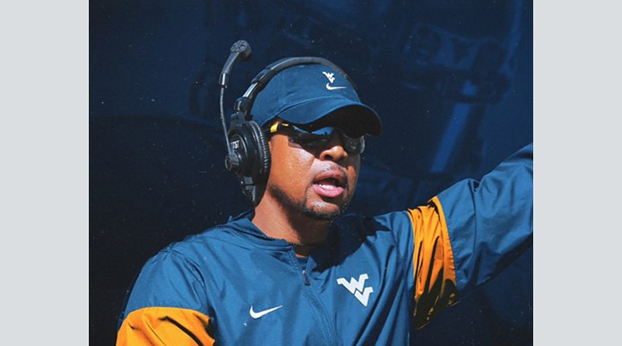 ShaDon Brown is a 1998 graduate of Danville Independent Schools and is now a football coach at West Virginia University.

ShaDon Brown is a 1998 graduate of Danville Independent Schools and now is a football coach at West Virginia University. He lives in Morgantown, West Virginia. After high school, he attended Campbellsville University and graduated in 2003. He shared his experience with Danville Schools, noting the emphasis in the district on both academics and athletics.

Q – Tell us about your Danville Schools journey. What school(s) did you attend, and what’s a highlight that stands out to you?
A – Hogsett Elementary, Bate Middle School and Danville High School. The highlight of being a student in Danville Schools was that academics and sports were equally important in the district.
To clarify that, I think the administration, when I was a student at Danville High School with Bob Rowland, principal at the time and then moving into the superintendent’s role, those people in the administrative part of the district made it equally as important for students to be involved in extracurriculars, and those things were seen as the same importance as academics because they were the front porch of that school district.
So you want to thrive in both. If you want to keep score on the field, then you play to win, and if you want to keep score in the classroom, you play to win, achieving A’s and B’s and being an honor roll student. I think those things were stressed. Those things were equally important, and that made it a place that people wanted to be, and they wanted to thrive in both.
I was a part of the football team. I was a part of the baseball team, and then I played basketball for two years. It taught you, obviously, how to deal with adversity. You don’t win every game. And it taught being comfortable being uncomfortable because you have to strain to win games, and work hard, and you have to strain and work hard to be successful in whatever you’re doing. It taught me there were no easy ways toward success more than anything.

Q – What aspects of your Danville Schools education helped mold you into the person you are today?
A – Teachers and coaches cared about the students.
You had kids who were wanting to go visit colleges and universities across the state, and they might not have the financial means to do so, and you had Coach Sam Harp and Coach Jerry Perry and other coaches on the staff who would take their own money and drive a kid or two kids or multiple kids to a local college to give them that experience, to see the opportunity outside of the roof and the surroundings of Danville.
I can think back to being a sophomore, junior and Coach Harp took the entire football team to Canton, Ohio, to the Pro Football Hall of Fame. That’s something that every one of those players would have never had the opportunity to see or go there if he hadn’t taken his time to drive a bus all the way to Canton, Ohio, to take kids to that event and that venue. When you play for a coach that you know he’s trying to do more for you than just be a coach throughout the season, then you know it when you see it.
I wanted to be a football coach because of Sam Harp and Jerry Perry, who were two of my coaches that poured a lot into me, that did a lot for me while I was a student athlete there, not only from a football standpoint but from a mentorship and life standpoint. I saw the things they did. I saw they were family men, and they were really strong mentors but also great coaches. I always wanted to be a coach because I saw what they did, and I just wanted to do the same things they did for somebody else’s kid. That’s kind of why I got into coaching. I knew I wanted to be a coach probably my senior year of high school. I didn’t know what level. I never thought in a million years I would be in major college football, coaching.

Q – When you think back on your Danville Schools experience, are there specific instances or relationships that stand out to you as having had a significant impact on your success since graduating?
A – Hogsett Elementary’s Carla Orberson (Cunningham) and Ms. Burberry. Bate’s Cecilee Napier and Coach Kenny Young. At DHS, Bobby Trumbo, Sam Harp, Jerry Perry, Ed McKinney.
As a product of Danville Schools, what advice would you give to a parent who was choosing an education path for their child?
Encourage your child to take college prep courses. Also, join an extracurricular team. School pride, built-in friends and sense of community and teamwork are built through outside activities.