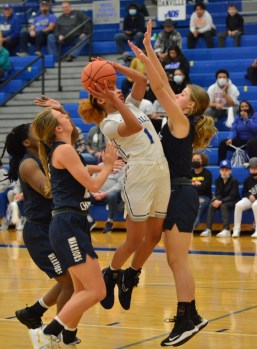 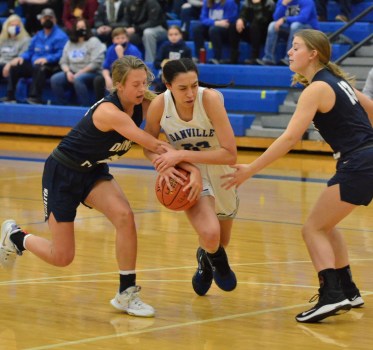 Desiree Tandy of Danville is fouled by Danville Christian’s Victoria Inmon, left, as she drives against Inmon and Grace Meyer during the first quarter Thursday. - Photo by Mike Marsee 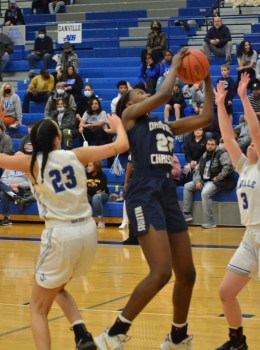 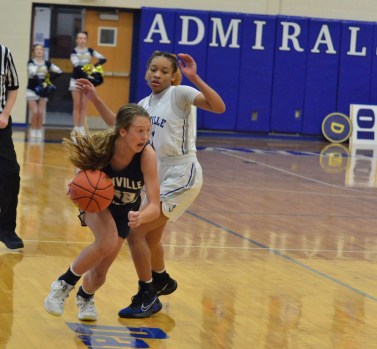 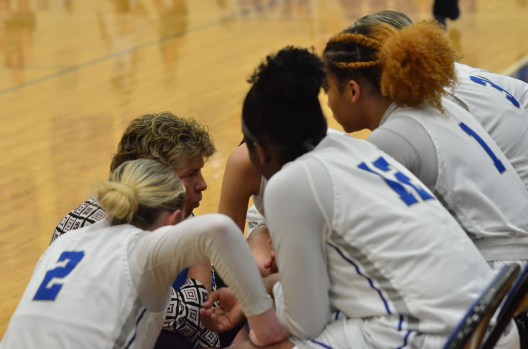 Danville coach Judie Mason talks to her starters during the closing minutes of the Lady Admirals’ victory over Danville Christian on Thursday. - Photo by Mike Marsee 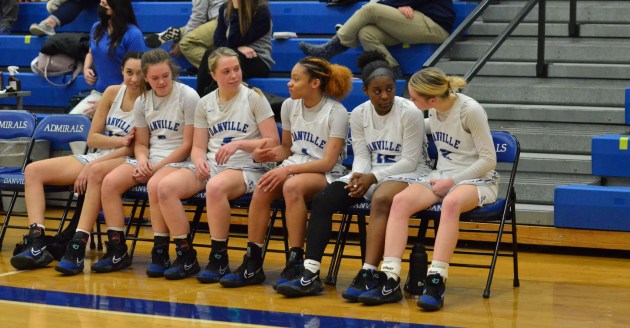 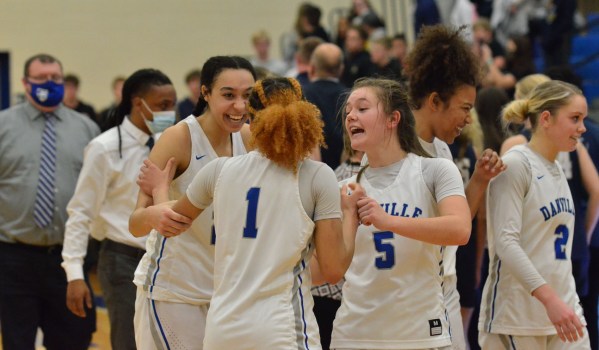 Desiree Tandy, Love Mays and Samantha Bottom, left to right, of Danville celebrate following the Lady Admirals’ victory over Danville Christian on Thursday. The three players combined for 45 of their team’s 63 points. - Photo by Mike Marsee

The Danville girls bounced all the way back.

The Lady Admirals had long since recovered from their loss to Danville Christian six weeks earlier, but their comeback wasn’t complete until they raised the district championship Friday night.

Danville’s 63-37 victory over DCA in the 45th District Tournament final — its third and most convincing win in the series since that loss — was the best indication to date that the Lady Admirals learned from their most disappointing defeat of the season.

Danville had beaten DCA twice by a combined total of 39 points in the two meetings since DCA’s 55-51 win Jan. 14 in the finals of the 12th Region All “A” Classic, but this was the game that mattered most.

“The other two wins we got against them didn’t mean anything if we didn’t win this one,” Danville coach Judie Mason said. “I told the girls, ‘They beat us in the All ‘A,’ and If they take the district title away from us then they’ve won the two biggest games of the year for us.”

Instead, Danville dominated the game from start to finish to capture its school-record 26th victory and its third consecutive district championship, also a first for the program.

“It definitely motivated us,” Bottom said. “After that loss we definitely pushed each other harder. We’ve played better as a team together, and we’ve done great ever since.”

Mason remains unhappy about that loss, but she couldn’t be happier with what has happened since.

“I’m just so proud of how they’ve bounced back since the All ‘A,’” Mason said. “When you hit adversity it shows your true colors, and I feel like that we really bought in and decided that we really wanted to go.”

Danville will go into the 12th Region Tournament, which begins Monday at Lincoln County, as one of the favorites.

The Lady Admirals won the final home game for their four seniors, but it was a trio of juniors who led the way on offense.

“We’ve got six kids that can score the ball, and if we play defense the way we’re playing, I feel like our chances are good against anybody,” Mason said.

Mays went 8 for 13 from the field, while Bottoms was 6 for 12 from 3-point range, and DCA coach Billy Inmon said their success was not a result of poor defense but of poor decisions on his part.

“We had decided tonight we were going to do things a little differently and crowd Love instead of playing off of her, and that was a big mistake on my part. And then giving Sami the open 3s, she just flat knocked them down, and I was counting on a different result,” Inmon said.

Bottom, the team’s sixth woman, burned the nets from 3-point range, going 3 for 5 in the first half and 6 for 12 overall.

“I guess I was just feeling it,” she said. “They left me open so I was just going to keep shooting, and they didn’t guard me until the end.”

“I’ve known her for a long time. She’s an awesome kid and I’m happy for her, but I wish I’d have been quicker to adjust,” Inmon said. “I told them the 63 points was on me tonight. The effort was there, but my adjustments were just flat out wrong.”

Danville effectively won the district final in the first quarter, when it forced seven turnovers in the first six minutes as it opened a 16-2 lead.

The Lady Admirals went on to shoot 59 percent from the field in the first half, going 13 for 22 overall and 4 for 8 from 3-point range, and they forced 14 turnovers. They finished with 18 more field goal attempts than the Lady Warriors, who had 22 turnovers.

“I think our defense was really good because we played together,” Bottom said. “We helped on (Mbugua), and we helped with shooters.

The Lady Admirals’ lead grew to 40-16 late in the first half, and they led by as many as 31 points in the second half as they finished with 13 points more than they had in any other game against DCA this season.

“All in all, offensively and defensively, it’s the best we’ve played them,” Mason said.

Grace Mbugua, DCA’s leading scorer and the top rebounder in the state, was held to seven points and two rebounds after falling into foul trouble.

DCA was 13-2 after its win over Danville but has gone 5-6 since, and Billy Inmon said he’ll be working to restore the Lady Warriors’ confidence before the regional.

“They’re winners, and they wanted to win this game. They didn’t discount it, and I’m glad they didn’t, but that’s something I’ve got to work on and remind them of (what they can do),” he said. “There’s a tomorrow, but next week there’s no tomorrow, and we’ve got to play like that.”

Danville will be working to get past the regional semifinals, where each of its past three seasons has ended, and making a run at its first regional title since 2014.