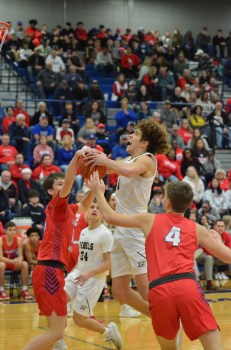 Jakei Tarter, center, of Boyle County is tied up by Lincoln County’s Colton Ralston as he goes up for a shot during the first quarter Friday. - Photo by Mike Marsee 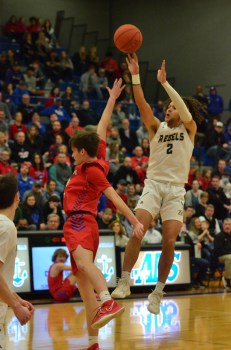 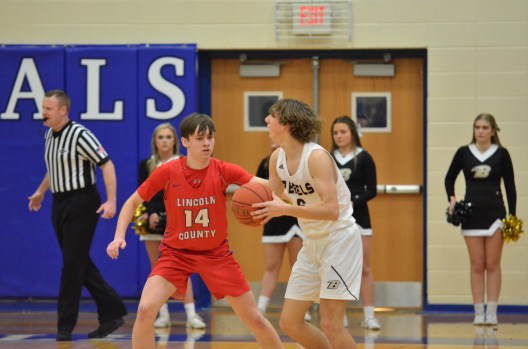 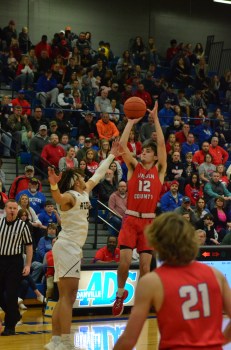 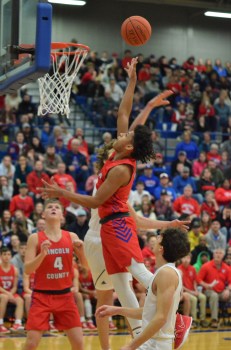 Tramane Alcorn of Lincoln County goes to the basket against Boyle County’s Jakei Tarter during the fourth quarter Friday. - Photo by Mike Marsee 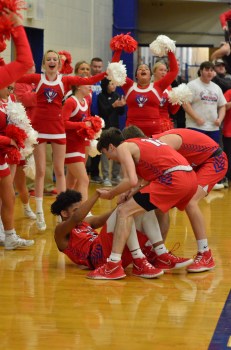 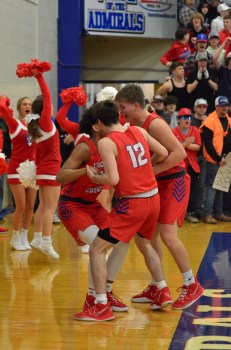 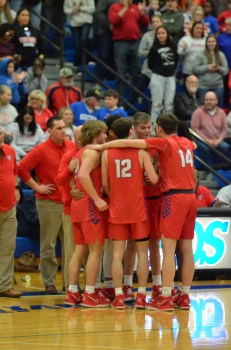 Lincoln County players celebrate as the huddle during a break in the action in the closing moments of the Patriots’ victory over Boyle County on Friday. - Photo by Mike Marsee 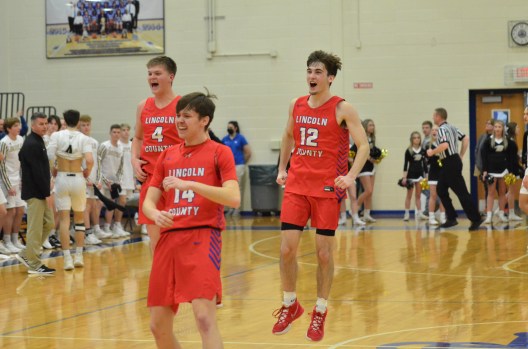 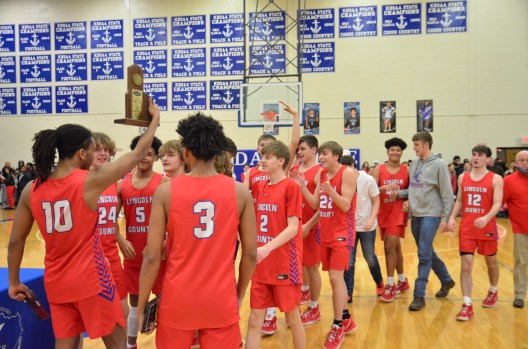 axon Smith shows the championship trophy to his Lincoln County teammates as the Patriots celebrate following their victory over Boyle County on Friday. - Photo by Mike Marsee 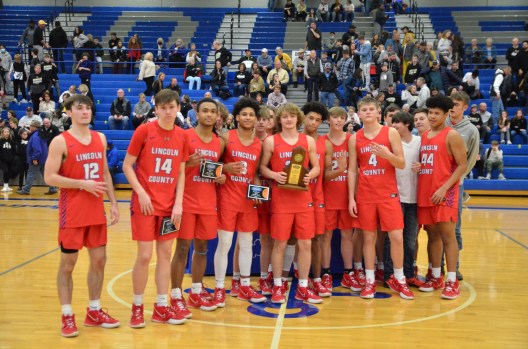 The 45th District is good and getting better, but no one is getting the trophy away from Lincoln County.

Boyle County still stands alongside Lincoln among the top teams in the region, Danville Christian is on the rise and Danville and Garrard County are improving.

But the Patriots remain the gold standard after they captured their fourth consecutive championship and their eighth in nine years with a 58-53 victory over Boyle in the 45th District Tournament final Friday night.

“We love winning (this district),” Lincoln guard Colton Ralston said. “It’s what we do.”

Since 2014, when Lincoln’s juniors and seniors were in the third and fourth grades, that has largely been true. The Patriots have won every district title since then except in 2018, even as the competition has gotten better around them.

“Our district is so good, and it’s better every year,” Lincoln coach Jeff Jackson said. “It’s just very competitive every time you go out there on the floor. You have to bring your ‘A’ game every game.”

That was true once again Friday at Danville, where Lincoln (26-7) led for most of the night but had to fight off a fourth-quarter charge by Boyle (22-7) in another compelling game between the teams.

“This was a heck of a game tonight, very, very competitive, and I’m just really proud of our kids for making plays when they had to make plays and doing the things that they needed to do,” Jackson said.

The Patriots used good defense, balanced scoring and even good rebounding to defeat the Rebels for the second time in three meetings this season.

“It was just a really big team effort from everybody,” Lincoln forward Jackson Sims said. “We really went even in scoring, I thought we played as a team. I think we looked good out there.”

Four players scored in double figures for Lincoln, which won for the ninth time in 10 games to reach its highest win total since the 2013-14 season, when it finished 26-6.

Tramane Alcorn had 15 points, Ralston had 14, Evan Smith had 13 and Sims had 12 for the Patriots, who led 22-17 at halftime after shooting 31 percent in the first half, then shot 50 percent in a second half in which they led by as many as 12 points.

“That just comes from our confidence,” Sims said. “I feel like we all have the green light to shoot, and I feel like we’re all pretty dang good shooters.”

On the other end of the floor, Boyle shot 48 percent in the second half and 41 percent overall from the field, but Lincoln got the stops that mattered most after the Rebels pulled within 46-44 with 3:39 to play.

Finally, a Lincoln team that averages 25.6 rebounds per game outrebounded Boyle 33-28 — including 17-11 in the second half — and got 15 second-chance points off nine offensive rebounds.

“We did a good job on the glass Our kids were pretty intense on trying to get rebounds tonight, and you’ve got to keep them off the glass, and I thought we did a really good job of blocking them out

The Patriots outscored the Rebels 7-2 in the first 90 seconds of the second half, taking a 29-19 lead on a 3-pointer by Sims.

The margin was seven points when the fourth quarter began, and Ralston hit a three and Sims hit two free throws in the first minute to give Lincoln its largest lead at 44-32.

Boyle then scored seven straight points and 12 of the next 14 to cut its deficit to two points. Luke Imfeld hit two 3s and scored 10 points during that run, and he finished with a game-high 24 points.

However, Imfeld did not score again until the closing seconds, by which time the outcome had been decided, and Sims said Lincoln’s late-game defense focused on stopping him.

“He’s the heart and soul of their team,” Sims said. “He’s a really good player, so I felt like when we shut him down their team couldn’t run as good as they could.”

The Rebels came up empty on three straight possessions after pulling within two, missing two shots from the field and the front end of a one-and-one.

Lincoln took a 50-44 lead with 2:21 left on a three-point play by Alcorn that energized the Patriots and their fans, and they hit six of eight free throws in the final 1:12.

Lincoln was charged with a technical foul when its students rushed the court prematurely after a foul was called with less than a second remaining, but the Patriots led 57-51 when that whistle blew and thus couldn’t be caught.

Student sections on both sides were the loudest part of a charged atmosphere in a gym that was perhaps 90 percent full and louder than any in this area over the past two seasons.

“We love it,” Ralston said. “We’ve got the best fans in the world. They come to every game, no matter where we play. It’s fun out there when they’re here.”

Ralston said the Patriots fed off their own fans — and those on the other side of the floor.

Hagan Webb went 3 for 7 from 3-point range and had 15 points and four assists for Boyle, and Jakei Tarter had 11 rebounds.

Both teams now move on to the 12th Region Tournament, where they will be two of the three highest-rated teams in the field at Pulaski County.

Boyle rebounded to beat Lincoln in the regional final last year after losing to the Patriots in the district final. Webb said the Rebels, whose loss Friday was their first in seven games, know they’re capable of the same resiliency in the coming days.

“You just go back to work and try to get better and try not to make the mistakes that we made tonight,” he said. “Try to get rolling, try to get hungry.”

As for the Patriots, they said their focus will be on winning one game, not three.

“We’ve got to lock in right now,” Ralston said. “Last year we got a little bit too happy. We’re not as happy this year, but we’re looking forward to next week.”