Commission reviews solar farm zoning; Some in agriculture want the option to contract with solar companies 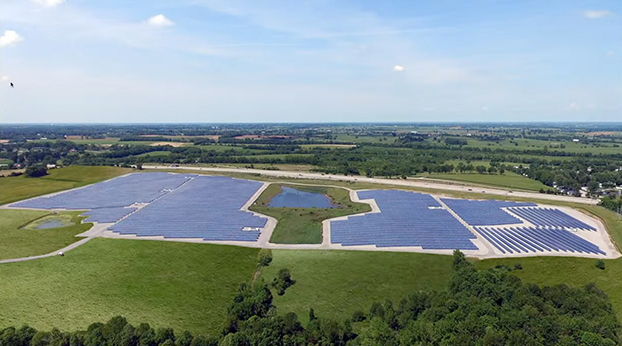 The Danville-Boyle County Planning and Zoning Commission is working on an amendment to zoning ordinance chapter 5, which involves solar farms in Boyle County.

Director Steve Hunter said there has been discussion about a large industrial solar farm coming to eastern Boyle County. He said in recent years he’s been approached by solar companies looking to come to the county.

One company was looking at a farm in the Clifton Road area. In December, the fiscal court voted to enact a moratorium on solar farms until the planning commission can revise the county’s regulations for solar farms.

Hunter said local governments across the state, including Boyle County, adopted the standard Kentucky law regarding solar farms. Currently in Boyle County, solar farms are allowed to be on land zoned agricultural and industrial.

In 2021, Senate Bill 266 was introduced to a Senate committee, which would ban solar farms on land that is zoned for agriculture. Land would have to be changed to industrial for solar farms, which are technically called merchant electric generating facilities. The state law defines those as sizable facilities that a company sells into utility grids for wholesale, not including small farms that do not sell electricity.

Counties that have planning and zoning can add rules to the state law, like setbacks from other buildings and properties. Private companies have to follow different rules in different counties that they go to.

“When I met with a company, they said in their opinion that Kentucky is a little behind the times, because there was a state law that basically said ‘here’s our rules, but if you have P&Z, you have other rules.’ As you can imagine, we have about 20 counties that have county-wide zoning, and we’ve all got different rules,” Hunter said.

Senate Bill 69 was recently introduced by Senator Paul Hornback, which might limit counties to only have control over certain things like setbacks. Hunter said any ordinance change they make in response to the moratorium might be affected by changing state laws.

In a planning meeting on Jan. 26, the change that Hunter and the planning commission proposed is that if a solar facility is over 50 megawatts, it should be zoned for industrial use, not agriculture. Currently at the state level companies can build solar farms on agricultural land with a conditional use permit. But Hunter said that process would not be ideal for Boyle County.

“At some level, we’re no longer in agricultural use,” Hunter said. “Our opinion is that at some level, you’re in industrial use, and if that’s the case, you need to zone industrial.”

The change would mean if a solar farm wants to stay in the agricultural zone, it has to be less than 50 megawatts on 10 acres, and 50% of the property has to stay agricultural use.

Hunter explained that currently, a megawatt is approximately four to six acres, so a 50 megawatt facility is 250 acres. In the planning meeting on Feb. 23, the commission debated about how many acres or megawatts should be the standard for industrial zoning. Commissioners said that solar technology may change where a megawatt would be less than four to six acres, and that they need to plan accordingly.

Valhkamp said they support solar energy as a way to move away from fossil fuels, but do not think that farmland should pay a price. She explained that Boyle County has areas that are already zoned industrial that are not being used.

“We at Smart Growth Boyle have always supported the preservation of farmland and do not want to see more agricultural land go out of production,” Vahlkamp said. “We hope that solar farms can be confined to areas already zoned industrial.”

Others at both meetings spoke about the importance of keeping plant life and pollinators around solar panels, and that there should be rules in place to protect the land.

Mary Robin Spoonamore, whose family owns a farm near Clifton Road that was approached by a solar company, spoke on behalf of area farmers and her parents, who have farmed all their lives. Spoonamore’s family was looking into the possibility of contracting with a solar company so her parents could retire.

“We do think that the farmer’s voice, the people who have farmed for a lifetime and have worked their land deserve some options for their land that aren’t shut down by county ordinance,” Spoonamore said.

She said that while she appreciates everything the land has given them, that farming has only gotten less sustainable over time. While her family turned down the contract, she said they would continue looking into solar as a way for her parents to have a retirement.

“There are more than a handful of older farmers in our county who find present farming hardly sustainable, and their voice deserves to be heard and considered as part of this solar/farmland preservation conversation,” she said.

The planning commission will continue discussing the amendment. The fiscal court extended the moratorium to May 1.