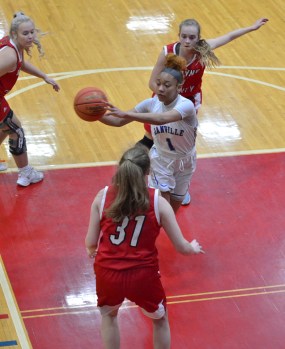 Love Mays of Danville passes the ball as she draws three Wayne County defenders into the lane during the first quarter Tuesday. - Photo by Mike Marsee 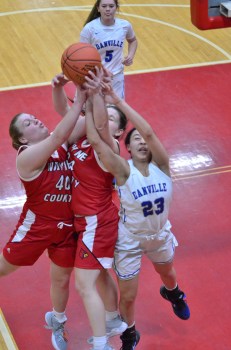 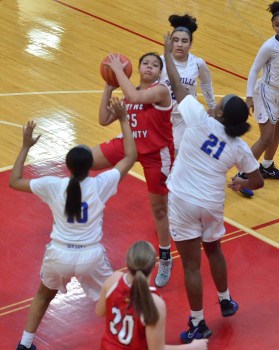 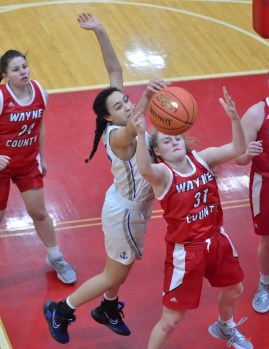 Desiree Tandy of Danville battles Wayne County’s 31 for a rebound during the first quarter Tuesday. - Photo by Mike Marsee 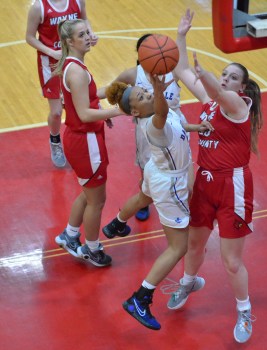 Love Mays of Danville puts up a shot against Wayne County’s 30 during the first quarter Tuesday. - Photo by Mike Marsee

STANFORD — The Danville girls took the fast lane to the semifinals.

The Lady Admirals were on the gas from the opening tip Tuesday night, and they didn’t let up until Wayne County was barely visible in the rear-view mirror.

They were running on all cylinders, scoring quickly and easily in the first half of a 66-25 rout in the first round of the 12th Region Tournament at Lincoln County.

There was a surgical efficiency to Danville’s first-half performance, but coach Judie Mason said the Lady Admirals’ success was all about style. That is, it was about making sure their style prevailed over the way Wayne wanted to play.

There was no danger of that, as Danville (27-4) scored 16 of the game’s first 18 points to establish itself as the dominant team and secure its spot in the semifinals for the fourth consecutive year. The Lady Admirals will play Mercer County (23-7) at 8:15 p.m. Friday.

Meanwhile, their defense held Wayne (11-19) to 26 percent shooting in the first half — on 14 fewer attempts — and forced 13 turnovers.

Danville led 26-8 by the end of the first quarter, when Jenna Akers’ 3-point goal started a 13-0 run that would stretch the lead to 36-8 before the midpoint of the second quarter.

It was 46-13 after another 3 by Akers at 1:31, and the Lady Admirals had a couple of chances to for a basket that would have pushed the margin to 35 points and started the running clock before halftime.

Their level of play allowed Mason to overlook the one thing they did that usually drives coaches crazy.

“We missed a lot of easy shots early on, but I couldn’t say anything to them because we were playing so hard,” she said. “We were getting our hands on every ball, and we made it hard for them to get the ball up the floor, and that’s what we’ve been doing lately.”

Danville’s defense has smothered its three postseason opponents, and they held a team to 25 points or less for the third time this season as they won for the 15th time in 16 games.

Desiree Tandy led Danville with 17 points and 10 rebounds. She went 8 for 14 from the field, scoring easily around the basket on both drives and entry passes.

“We felt that she was a mismatch because they are more of an inside team,” Mason said. “The whole middle was open, and Des showed what she can do when somebody big is guarding her on the perimeter.”

Akers went 4 for 6 from 3-point range for 12 points, and Love Mays had 10 points and five rebounds for Danville, which defeated Wayne 74-44 in the early days of the season.

The running clock kicked in early in the third quarter, when Danville scored 14 straight points to take its largest lead at 60-16.

The Lady Admirals move on to the point where each of their last three seasons has ended. They lost to Casey County in the regional semifinals in 2019 and 2020 and to Southwestern in 2021.

This time, it will be a matchup with Mercer, which defeated Pulaski County 65-53 in its first-round game Tuesday.

It’s a rematch of a Dec. 14 game that Danville won 64-49. The Lady Admirals shot 46 percent from the field in that game and got 19 points from Lara Akers, 17 points from Tyliah Bradshaw and 10 from Tandy.