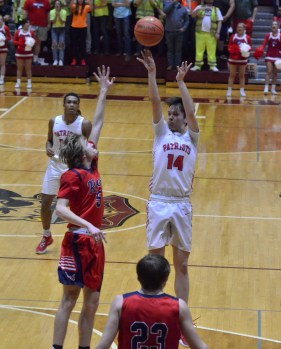 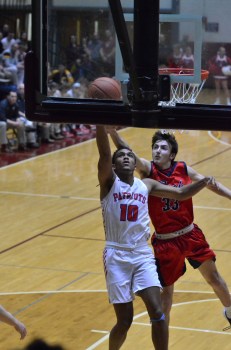 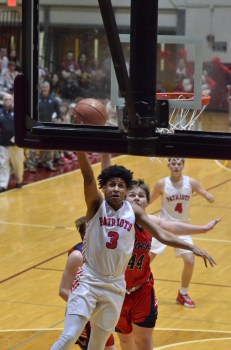 Tramane Alcorn (3) of Lincoln County gets past Rockcastle County’s Jake Sanders for a layup during the first quarter Wednesday. - Photo by Mike Marsee

SOMERSET — It was every bit the battle the Lincoln County boys were expecting, and they were up for the challenge.

The Patriots were prepared for a physical game Wednesday night in the first round of the 12th Region Tournament, and that’s exactly what they got.

They took Rockcastle County’s best shots and delivered a few big blows of their own as they stayed in front throughout the second half of a 72-57 victory at Pulaski County.

“We knew coming in it was going to be a physical game, and it was,” Jackson said.

Physicality is not Lincoln’s forte, but Jackson said the Patriots were better prepared for a game like this than they would have been earlier in the season.

“We lifted a little bit more during the year than what we usually have in the past, and we’ve played a really good schedule, and the teams that we’ve played have been very physical and very hard-nosed, and hopefully it’s kind of prepared us for (this),” Jackson said.

Lincoln (27-7) powered its way into the regional semifinals for the second consecutive season and the third time in four years. The Patriots will play McCreary Central at 6:30 p.m. Monday.

This victory allowed the Patriots, who have won 10 of their last 11 games, to match the school record for wins in a single season. They tied the 1980 and 2008 teams, both of which won regional titles.

It looked as if it might be an easy victory after Lincoln shot out to a 17-2 lead in the first 4:08, but it was anything but easy.

Rockcastle (20-12) recovered and battled back to take the lead midway through the second quarter and stayed within shouting distance of the Patriots until the last two minutes.

“Our kids did some things that we needed to when we needed to and made plays and got stops, and I’m really proud of them. But there’s some things we need to clean up between now and Monday night,” Jackson said.

Four Lincoln starters scored in double figures in each of its two district tournament wins last week, and all five starters did so on Wednesday. Tramane Alcorn led the way with 23 points, including 11 in the fourth quarter, and Colton Ralston added 18 points.

The Patriots scored 10 points in the paint, including four each by Alcorn and Jaxon Smith, as they outscored Rockcastle 10-5 over a span of about five minutes to take a 51-41 lead with 5:37 remaining.

The Patriots went 8 for 14 at the free-throw line in the final 2:18 but still outscored the Rockets 12-4, holding them to one field goal.

Lincoln also got to the basket often in its opening run, getting three layups from Alcorn and one from Evan Smith as well as two 3-point goals from Colton Ralston and one from Jackson Sims.

The lead changed hands three more times, the last when an Alcorn layup gave Lincoln a 26-25 edge with 99 seconds left in the first half.

Jaxon Smith scored 11 points and Sims and Evan Smith had 10 each for Lincoln, which shot 55 percent from the field. Sims had a team-high eight rebounds.

Jake Sanders had 19 points and Matthew Chasteen had nine rebounds for Rockcastle, which lost in the first round for the second straight year.

Lincoln’s next opponent, McCreary, outlasted Mercer County 53-50 in double overtime for its first regional win since 2009. That McCreary team defeated Lincoln 47-44 in the semifinals before falling in the title game.

This year’s Raiders repeated as 48th District champions and have won seven straight games. They are led by junior guard Kyle Stephens, who entered the regional averaging 20.0 points per game.

“They’re very good, very well-coached, and they’ve got a great player in Stephens,” Jackson said. “We’ll just have to … watch some film and get ready for them and come up with a game plan between now and then. They had a great crowd tonight, and it should be a great atmosphere in here on Monday night.”