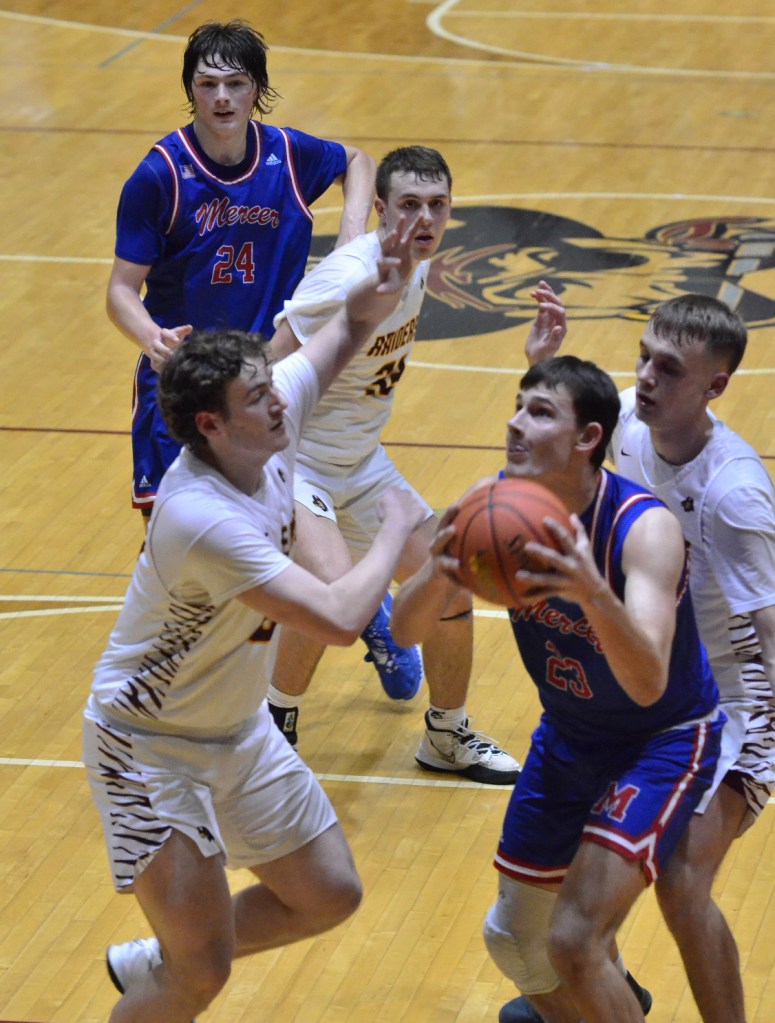 Evan Hart (23) of Mercer County draws three McCreary Central defenders as he looks for a shot during the fourth quarter Wednesday. - Photo by Mike Marsee

SOMERSET — The Mercer County boys may not have been fully prepared for the situation they found themselves in Wednesday night, but they were fully engaged.

Playing in the 12th Region Tournament for the first time in three years, the Titans went toe to toe with a more seasoned McCreary Central team for as long as they could before bowing out with a 53-50 loss in double overtime.

It wasn’t the ending Mercer wanted, but it was a step forward for a team that hadn’t played in a game of this magnitude in some time.

“Last week when we played (in the 46th District final), for all 16 kids on our varsity roster, that was the first time they’ve ever played for a championship in basketball.

Tonight they played one of the best 12th Region games, probably, in recent memory,” Mercer coach Josh Hamlin said. “Our kids battled. I really am proud of them.”

Mercer survived McCreary’s rally at the end of regulation and a tying shot just before the end of the first overtime before yielding in the second extra period at Pulaski County.

The loss ended a season of ups and downs for Mercer (16-14), which had appeared in the regional for five straight seasons before missing the last two.

“I’m just really appreciative of the opportunity,” Hamlin said. “There’s been a gap for us the past couple years of being here. Just remembering what it’s like to be in a regional tournament atmosphere, you’re thankful for it when you get to play a game like this.”

The Titans, whose 16-man roster includes nine freshmen and sophomores, led for most of regulation. They were up 28-16 early in the second half, but McCreary (17-11), which has 14 juniors and seniors on a roster of the same size, rallied to tie the game at 37-all midway through the fourth quarter.

The Raiders led by two and had the ball when Mercer’s Seth Caton stole it and scored on a layup that made it 42-all with 1:10 to play. Caton rebounded a McCreary miss at :03 and the Titans took a timeout, but an errant pass cost them a chance at a winning shot.

In the first overtime, Evan Hart hit two free throws to give Mercer a 48-45 lead with 17 seconds left, but McCreary’s Trey Davis buried a 3-point shot from the corner to tie the game at :07.

The Raiders took the lead in the second overtime and didn’t let it go, thanks in part to two turnovers by the Titans. Mercer had a chance to tie the game after Caton rebounded a missed free throw with 23 seconds left, but a 3-point try missed the mark just before time ran out.

Kyle Stephens scored 17 points to lead McCreary, which got its first regional win since 2009.