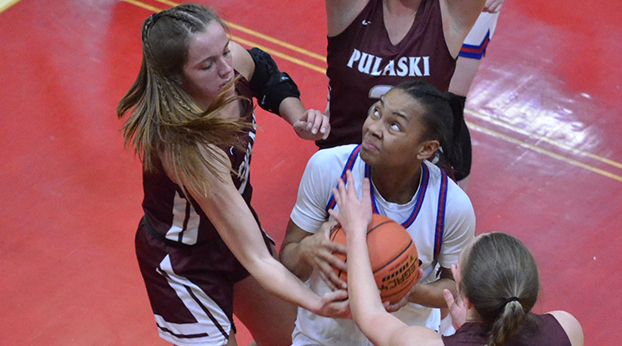 Timberlynn Yeast of Mercer County draws three Pulaski County defenders as she looks for a shot following an offensive rebound during the first quarter Tuesday. - Photo by Mike Marsee

STANFORD — When the Mercer County girls were good, they were very, very good. And that was plenty good enough to get them through.

The Lady Titans were at their best when they were on the attack Tuesday night, slicing through Pulaski County’s pressure and getting to the basket to take control of their game in the first round of the 12th Region Tournament.

They scored in transition and off turnovers frequently in the second quarter as they opened a double-digit lead that would carry them to a 65-53 victory over Pulaski at Lincoln County.

There were flaws, from shaky free throw shooting to turnovers, but Mercer’s success in its goal of speeding up the game more than made up for them.

“That’s what we’ve got to do,” Mercer coach Hayley Spivey said. “That’s our game, and that’s when we’re best. We’ve got to get them in transition, and I thought we did a good job of that, especially in the second quarter.”

Mercer held its own in the first period before going on the attack in the second, when a 17-3 run propelled the Lady Titans to a 31-20 lead.

“I thought we did a good job of handling their pressure,” Spivey said. “Their defense is really good, and that’s what we prepped for the past few days in practice, and I thought the girls responded well. We kind of started off slow there and built some momentum.”

That momentum will take Mercer (23-7) into the semifinals for the second straight year. The Lady Titans will face Danville (27-4) at 8:15 p.m. Friday.

Mercer also has the momentum of a 13-game winning streak since its last loss Jan. 15 — which includes a 56-53 win over Pulaski on Feb. 14 — that has been fueled by aggressive play.

“We’ve been trying to preach this all season, but especially the past few days in practice, that we’ve got to be in attack mode,” she said. “If we catch the ball in the middle of the floor, we’ve got to be getting to the rim. That’s really important to us.”

Timberlynn Yeast scored 19 points, Teigh Yeast had 18 and Lindsay Jessie had 16 for Mercer, which led 41-25 early in the second half before Pulaski (21-10) closed the gap to three points.

Teigh Yeast had five points and Anna Drakeford had four for Mercer during that 17-3 run in the second quarter.

Timberlynn Yeast drove for a layup in the opening minute of the fourth quarter that stopped a 16-4 run by the Lady Maroons, who had pulled within 45-42.

“That’s something we’re going to be working on the next two days,” Spivey said. “We’ve struggled from the line. It’s not great, but we’re better than what we did tonight. … Luckily we shot enough and played good enough defense to where it didn’t matter. Down the stretch in the semifinals — and hopefully if we’re in the finals — we can’t miss 15 free throws.”

The Lady Titans, who also had 15 turnovers, still extended their lead as they held Pulaski to six field goals on 20 attempts and outrebounded the Lady Maroons 14-7.

Timberlynn Yeast had nine rebounds and Drakeford had seven for Mercer, which had a 36-31 overall edge on the boards. Yeast also blocked six shots.

Mercer moves on to a matchup of teams with similar styles as it prepares for Danville, which has won 15 of its last 16 games.

“They’re playing really well right now,” Spivey said. “They’ve got five shooters on the floor at all times, and they like to play that fast-paced transition game as well.”

Mercer shot 38 percent from the field in a 64-49 loss at Danville on Dec. 14. Timberlynn Yeast scored 17 points but the Lady Titans were without Drakeford, the sophomore guard who missed 12 games while recovering from a knee injury.

“I think we can be a little more competitive than we were last time,” Spivey said. “I think it’ll be a good game and probably a fun game to watch, because we both have similar styles.”