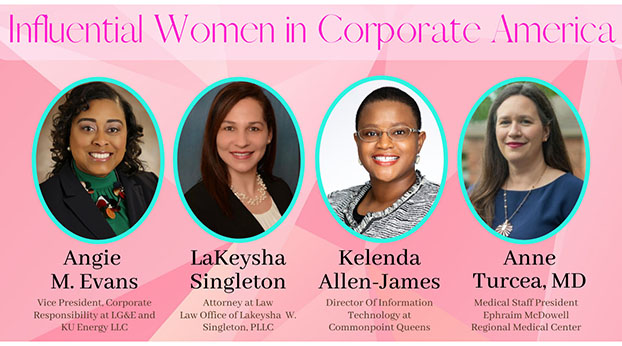 The Office of Diversity and Inclusion at Centre College is hosting an International Women’s Day Convocation event on March 8. The event is at 7 p.m. in the Weisiger Theater.

In celebration of March being Women’s History Month, the event will feature four panelists who are successful and influential women in corporate America. They are Angie M. Evans, Anne Turcea, LaKeysha Singleton, and Kelenda Allen-James. Two graduated from Centre, and two work in Danville.

The event is open to the Danville community. Panelists will talk about how they gained success in largely male-dominated industries, and attendees will be able to ask questions.

Melinda Weathers, director of Diversity, Equity, and Inclusion Education, said this is the first time they are hosting a panel for Women’s Day.

“We wanted to host an event to celebrate diversity but also provide an opportunity for students and the community at large to hear about career paths that women have been successful in,” Weathers said.

While the event is free, Weathers said they would like anyone who’s going to register at the link from the QR code on the flyer. Weathers hopes people in attendance can learn from the panelists’ stories of how they overcame barriers in their careers.

“I hope people walk away feeling inspired to career paths that traditionally have been dominated by men; hopefully they gain tips and inspiration of how to navigate those spaces,” she said. 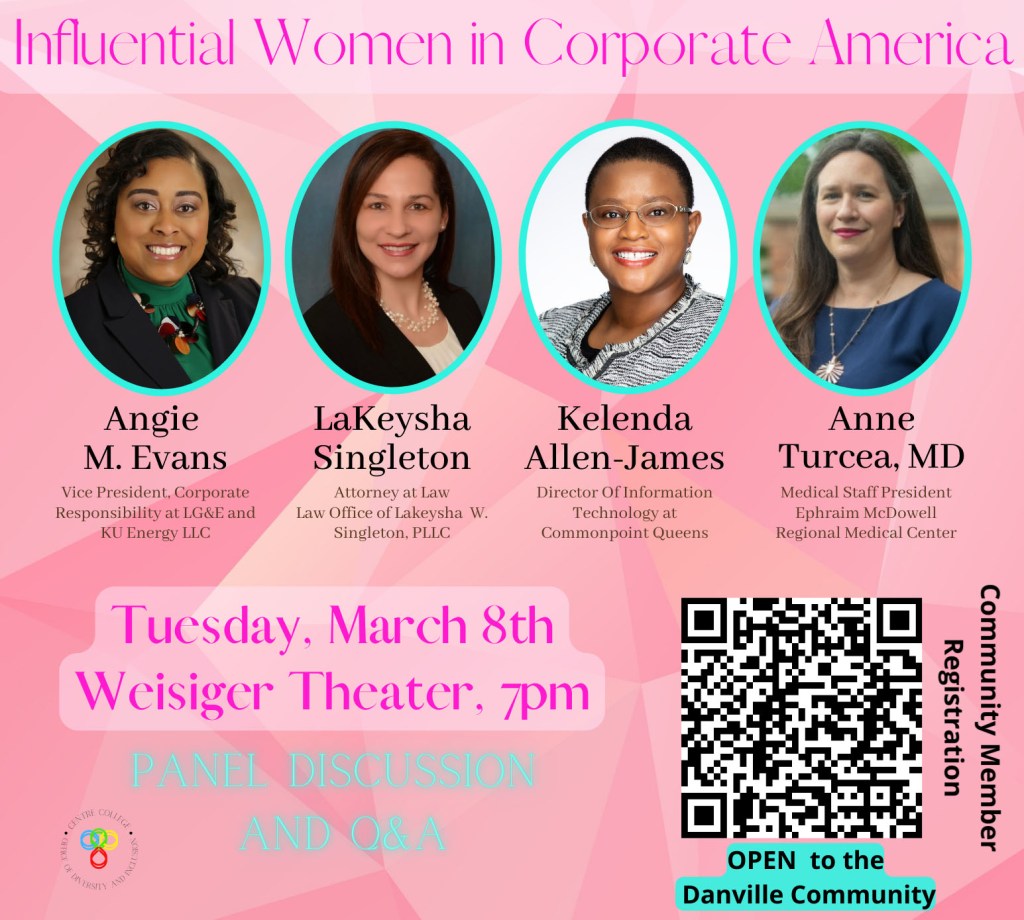 Information about each panelist that Weathers provided is below.

Angie McDonald Evans joined LG&E and KU Energy in January 2015 as manager, Corporate Responsibility. Evans is responsible for leading community engagement and investments, key corporate responsibility programs and grant-making processes.
Prior to joining LG&E and KU Energy, Evans was vice president of Community Leadership at the Community Foundation of Louisville. Before that, she served as director of Planned Giving at the University of Louisville, and spent eight years in the financial industry as a vice president and private banker at National City, now PNC. She began her career as special assistant to Louisville Mayor David L. Armstrong and as the director of Affirmative Action.
Evans was named a 2020 Woman of Distinction by the Center for Women and Families. She currently serves on the Centre College Board of Trustees and the board of directors for Actors Theatre, American Printing House for the Blind, Bates Community Development Corporation, Community Foundation of Louisville, James Graham Brown Foundation and Women Influencing Louisville. She is a member of the Business First Forty Under 40 class of 2002.
Evans is a graduate of Centre College and received her Juris Doctor from the University of Kentucky College of Law.

Anne Turcea is the first female President of Medical Staff at Ephraim McDowell Regional Medical Center.
Turcea provides leadership, guidance, and a voice for the medical staff while promoting effective communication between medical staff and hospital administration.
She has worked as an obstetrician and gynecologist for more than 18 years. She is board-certified, recognized as a Fellow of the American Congress of Obstetricians and Gynecologists, and serves as a board member for the Boyle County Health Department and Ephraim McDowell Regional Medical Center.
Turcea is a native of Danville, Kentucky. She earned her medical degree from the University of Louisville and completed her residency at the University of Iowa.

LaKeysha Singleton is an attorney serving Boyle, Mercer and surrounding counties. She grew up in Stanford, Kentucky and later moved to Danville.
Her legal practice in Danville is concentrated in the areas of family law, child custody, and criminal defense. She also provides a broad array of legal services in the areas of real estate, personal injury, wills and probate, and civil litigation.
LaKeysha earned her Juris Doctor from the University of Kentucky College of Law and undergraduate degree from Midway College. Prior to opening the firm, LaKeysha served as Staff Attorney to the Hon. Samuel Todd Spalding of the 11th Judicial Circuit. In addition, LaKeysha worked as a Staff Attorney for the Kentucky Department of Public Advocacy.

Kelenda Allen-James is a missions-oriented, New York-based technology specialist, leader, and speaker, spreading the critical awareness of diversity in technology. As a speaker, she delights her audience with topics on professional development, women in technology, people of color in technology, and the importance of pursuing STEM careers for young people.
Kelenda has made a significant impact as director of information technology at Commonpoint Queens, Technology Support Manager at St HOPE Leadership Academy, Director of IT Network and Support Administrator for Ramaz School, and IT Support Specialist at Birch Family Services.
She said, “Representation matters. Growing up, I did not see people like me [in technology], and I want to be whom I did not see.
Kelenda has 20 years of experience, has supported 1000 plus end-users, and has given over 60 speeches, including Touro College Graduate School of Technology, Centre College, Startup Weekend Edu Taipai, Girls Code Lincoln, and International Association of Women: Inspirational Influencer Summit.
She’s a graduate of Centre College.