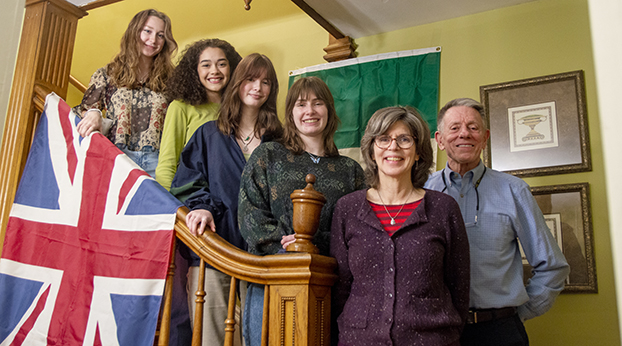 Those going to Carrickfergus, Northern Ireland this summer posed by flags of Ireland and The United Kingdom, since Northern Ireland is part of the UK. Pictured are students Chloe Strysick, Londyn Jackson, Lilli Hall, Kira Pusasteri, and SC Commissioners Jane Dewey and Milton Reigelman. Those not pictured, but going on the trip, are students Max Germann, Ellie McMann, and Tristan Harris.

Chair of the Sister Cities Commission Milton Reigelman will be going on the trip. SC Commissioner and Director of Arts Education at the Danville Schools Jane Dewey will also be chaperoning, along with her husband Matthew Hallock.

The trip was originally planned for summer 2020, but was canceled due to Covid-19. Four of the five students who were selected for that trip have aged out of the criteria.

Students have to be entering ninth through 12th grade.

One student, Tristan Harris, was chosen for the previous trip and ended up getting to go this year. Another student on this trip, Max Germann, wanted to go in 2020 but was too young at the time.

Both Reigelman and Dewey have been to Northern Ireland before. Dewey knows most of the students, and said she wanted to go this year because it’s been too long since people have been able to travel because of the pandemic.

“It was a combination of knowing and feeling comfortable with the students and saying, it’s been too long since we’ve been anywhere,” she said.

The students will visit Carrickfergus’ 12th-century Norman Castle, the Titanic Museum in Belfast, the Gobbins Cliff Walk along the coast, and the Giant’s Causeway, a geographic wonder of hexagonal columns of rock on the coast. They will also spend two nights in Dublin.

Staying with the exchange families in Carrickfergus, students will have more freedom of what to do on the trip, and they will get to experience Irish culture firsthand.

Families will treat the exchange students just as they would their own kids.

“It’s really nice for our students to be able to go to another country and see it through the eyes of people who are their age, there’s some independence,” Dewey said. “It’s an English-speaking country, but it is a different culture.”

Reigelman had sent applications for the trip to the three high schools, Boyle, Danville and Danville Christian Academy. Guidance counselors at the schools spread the word of the trip. Then SC commissioners went to students’ homes to interview students and parents as possible host families.

Ryan Moffett, founder and director of the Carrickfergus UPLIFT arts group, found students and their host families in Ireland. Reigelman has been to Carrickfergus several times, and said the people there are very welcoming. He said the experience of staying with an Irish family will be transformative for students.

“There’s a difference between being a tourist and being a traveler,” Reigelman said. “When you’re a tourist, you stay at a hotel and you only meet people who are trying to sell you stuff. These kids are going to be with someone their age in a real Irish home. They’ll see it in a way where they would never see it as a tourist, and it’s transformative.”

Student Kira Pusasteri said she is looking forward to seeing Ireland’s beautiful scenery and being able to hike along the coast.

“Meeting people my age in Ireland will be really cool, and introducing them to central Kentucky; because it’s very different, but I’ve grown to like central Kentucky a lot more than I used to,” Kira said. “It is really pretty when you wake up in the morning and it’s all green and misty, and I think it might be similar in Ireland.”

When the Irish students come to Danville, they will see popular Danville sites like Pioneer Playhouse, Constitution Square Park, Wilderness Trail Distillery, etc. They may also go out into the larger central Kentucky region. Kira suggested Mammoth Cave Park, and Reigelman said Irish kids in the past have loved going to the SomerSplash water park.

The SC commission will also host the “Great American Dessert” party to welcome the Irish students. The party is to also thank all SC supporters who have donated money.

With funds that SC saved up over the last two years of not being able to travel, they were able to provide up to full scholarships for students going to Carrickfergus.

Carrickfergus became Danville’s sister city in 2008. Since then, Reigelman said at least 350 Danvillians have been to Carrickfergus. There have been three SC trips of 30 people each, the Centre College football team has gone, and Centre womens’ and mens’ soccer teams go every two or three years. Reigelman is also leading a Centre College alumni trip to Ireland in April, and will meet with people in Carrickfergus.

SC expects to expand the high school exchange program in the future.

People who want to donate to SC can contact any SC commissioner or mail a check to 60 Mapletree Place in Danville. Anyone who donates will get a 30% off coupon for two meals and drinks at an Irish Gastropub in Lexington called Horse and Jockey. They will also receive coupons for other things in town.