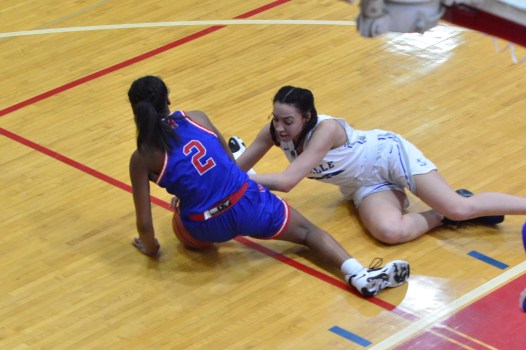 Teigh Yeast (2) of Mercer County and Desiree Tandy of Danville reach for a loose ball during the first quarter Friday. - Photo by Mike Marsee 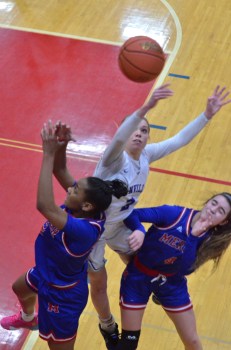 Lara Akers, center, of Danville reaches for a rebound along with Timberlynn Yeast, left, and Anna Drakeford of Mercer County during the first quarter Friday. - Photo by Mike Marsee 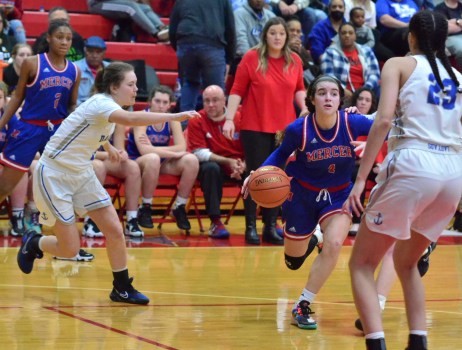 Anna Drakeford (4) of Mercer County drives toward the basket as Danville’s Samantha Bottom, left, and Desiree Tandy defend her during the fourth quarter Friday. - Photo by Mike Marsee 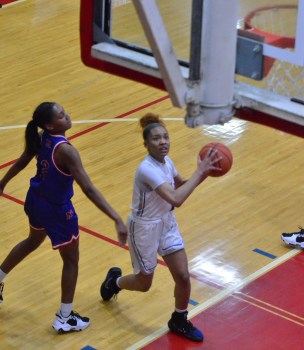 Love Mays, right, of Danville gets past Teigh Yeast of Mercer County for a layup attempt during the first quarter Friday. - Photo by Mike Marsee 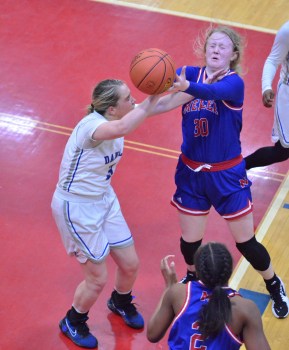 Lindsay Jessie (30) of Mercer County is fouled by Danville’s Jenna Akers as she reaches for a rebound during the second quarter Friday. - Photo by Mike Marsee 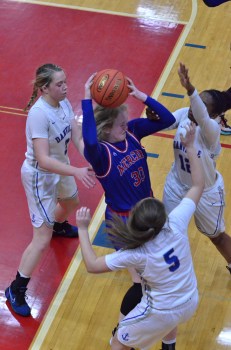 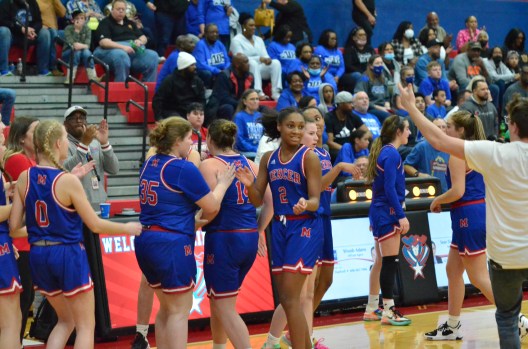 STANFORD — The Mercer County girls got their way.

The Lady Titans did what they wanted to do on offense and what they needed to do on defense in the second half Friday night to defeat Danville and return to the regional finals.

Mercer dictated the way the game was played for most of the second half to scratch out a 76-69 victory in a 12th Region Tournament semifinal at Lincoln County.

“That was the plan,” Mercer coach Hayley Spivey said. “We knew we were going to have to defend (because) they’re very good offensively, and we knew that we had to attack the basket and kind of get them going, and I thought we did a pretty good job of that.”

Good enough to give Mercer (24-7) a shot at the regional title for the second consecutive year. The Lady Titans, who have won 14 straight games, will face Southwestern (24-7) in a rematch of last season’s championship game at 7 p.m. Saturday.

Danville (27-5) was once again denied a title shot, its season ending in the semifinals for the fourth year in a row.

Mercer took advantage of its best offensive weapon to take control of what was a back-and-forth game for the first 18 minutes. Junior guard Timberlynn Yeast scored 15 of her team-high 23 points in the second half to lead the Lady Titans’ assault.

“She played like a real woman tonight, and we couldn’t stop her,” Mason said.

The Mercer defense couldn’t stop Danville’s Love Mays, who scored 19 points in the fourth quarter as she tried to will a comeback and finished with 31 points.

But Spivey was willing to live with that, as she said Mercer’s focus was on containing Danville’s leading scorer, Lara Akers, and limiting the damage the Lady Admirals did from 3-point range.

“I had Teigh (Yeast) guarding Lara Akers. We were going to limit her and we didn’t want to leave the 3 open,” Spivey said. “Love and (Tyliah) Bradshaw and (Desiree) Tandy had great games, and we knew they would be hard to guard, but we thought if we could limit (Lara and Jenna) Akers then we should be able to handle them, and I think we did a great job defensively.”

The Akers sisters scored only five points each and were shut out in the second half, and Danville was just 2 for 13 from 3-point range.

“We got the shots, we just missed them,” Mason said.

The Lady Admirals shot 47 percent from the field, but the Lady Titans shot 48 percent.

Both Timberlynn Yeast and Lindsay Jessie, who scored 19 points for Mercer, were 8 for 16 from the field. Teigh Yeast scored 13 points in the second half and 15 points in all on 5-of-12 shooting, and Sara Dunn hit two of the Lady Titans’ four 3-pointers and scored 10 points.

But it was Timberlynn Yeast who was hardest to stop as she took control of the offense. Mason said that job was made much harder when Mays, Danville’s top defender, picked up two fouls in the first three minutes and stayed in foul trouble for the rest of the night.

“Timberlynn took us to the basket, and when Love’s on the bench we don’t have anybody that can guard her,” Mason said.

There were 10 ties and seven lead changes before Timberlynn Yeast drew a foul and hit two free throws to break a 37-all tie and give Mercer the lead for good with 5:51 left in the third quarter.

The Lady Admirals scored nine of the next 11 points to pull within seven at 56-49 with 5:23 remaining, but that was as close as they would get down the stretch. All eight Mercer baskets thereafter came on layups as they kept Danville at bay, and all the free throws were shot by Teigh Yeast, who was 4 for 5 at the line in the closing minutes.

Danville led four times for a total of 1:48, and never by more than two points. The Lady Admirals’ last lead was at 33-32 in the opening seconds of the second half.

Mercer got 12 points in the first quarter and 16 in the first half from Jessie, a junior who averages 9.3 per game.

“She’s been in the gym, I think, every day after practice for the past three weeks. She has stayed and shot, and it’s noticeable,” Spivey said. “She’s hitting shots that she wasn’t hitting at the beginning of the season.”

Jessie was also a major factor on the boards, where Mercer outrebounded Danville 34-30 and got 14 offensive rebounds. She had five offensive rebounds in the third quarter alone and led the Lady Titans with nine boards.

“She’s all over the place,” Spivey said.

Tandy had 16 points and nine rebounds for Danville, and Bradshaw added 12 points.

It was a disappointing end for Danville, a veteran team that focused all its efforts on winning a regional title.

“This team, we did everything we could,” Mason said. “I love them, win, lose or draw. These kids really care, and it’s hard for me to say anything negative to them or about them.”

The Lady Admirals have enjoyed a four-year run of success — five years in the case of the Akers sisters, who returned for a second senior season under the provisions of Senate Bill 128 — that included 90 wins and three straight 45th District championships.

However, Mason said what she appreciates most is how easy the players have been to coach, something she said made her love coaching again when she returned to Danville in 2019 after three years away from the game.

Mercer hopes to have more fun tonight than it did in last year’s regional final, where the Lady Titans lost to Southwestern 62-56.

The two teams have combined for six of the last seven 12th Region titles. Mercer won four straight from 2015-18, and Southwestern has won two of three since.

The Lady Titans defeated the Lady Warriors 63-54 on Feb. 18 in Somerset in the regular-season finale for both teams, getting 27 points and 10 rebounds from Timberlynn Yeast and shooting 45 percent from the field. Spivey said they will need another top effort Saturday to make it two wins in a row over Southwestern.

“They’re a tough team. They shoot the ball really, really well and … we’ve got to defend the 3 and rebound,” she said.

“We were in the same exact position last year, so we’re hoping to change the outcome.”