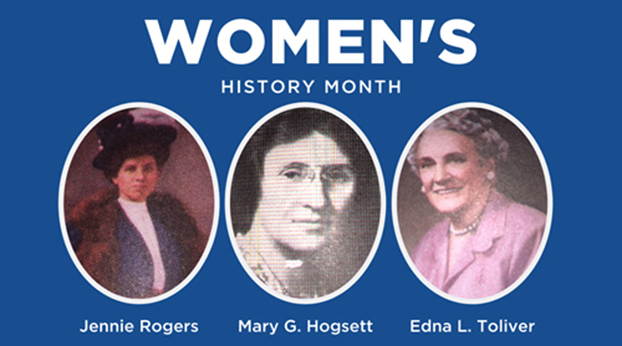 Courtesy of the Danville School District

It’s Women’s History Month, and Danville Independent Schools is featuring the women who are the namesakes of the current Mary G. Hogsett Primary School and Edna L. Toliver Intermediate School, as well as the old Jennie Rogers Elementary School.

Jennie Rogers
Jennie Rogers was principal at the Broadway school for an impressive 31 years before the building burnt down in 1951, according to a publication titled, “Danville Independent School District: An Historical Perspective Through 2001.”
After that, the Danville Independent School District bought property from Centre College to build a new elementary school at 410 E. Main St., which was named Jennie Rogers Elementary School after the woman who dedicated her life to Broadway school.
She served as principal for two more years while the new school was under construction and retired in 1953.
Rogers spent her whole life in Danville and was one of 13 children. She even lived right across the street from Broadway school at one point. She is noted in “An Historical Perspective” as being “small in stature” but a strong and positive presence in Broadway school.
Before Jennie Rogers Elementary School closed its doors in 2018 and the City of Danville bought the building in 2021 to turn it into a community center, keeping the Jennie Rogers name, the school was one of three elementary schools in the district, along with what was then known as Hogsett Elementary School and Toliver Elementary School, now Mary G. Hogsett Primary School and Edna L. Toliver Intermediate School.
Rogers died at 75 years old and is buried in Danville, her home, in Bellevue Cemetery.

Mary G. Hogsett
Mary G. Hogsett served as a secretary to the superintendent of Danville Schools for 27 years. She started her career in 1927 and assisted six different superintendents, according to a publication titled, “Danville Independent School District: An Historical Perspective Through 2001.”
Through administrative changes, she stuck around and devoted herself to the district.
What was known as Hogsett Elementary School and now as Mary G. Hogsett Primary School was built in 1958 and was named in her honor.
Hogsett was born in Harrodsburg in 1887 and graduated from the Kentucky College for Women in Danville. Her father was founder of Hogsett Academy, an educational institution in Harrodsburg that moved to Danville. Her mother was organizing regent for the St. Asaph Chapter of the Daughters of the American Revolution.
Hogsett died at 67 in 1954. She was a member of the DAR and was very active in it and at the Second Presbyterian Church.

Edna L. Toliver
In her early life, Edna L. Toliver was born in 1888 in Wayne County and graduated from Danville’s Kentucky College for Women in 1906. She started teaching in Perry County at Buckhorn Mission School and then in Beckley, West Virginia, where she rode a mule to school, according to a publication titled, “Danville Independent School District: An Historical Perspective Through 2001.”
She went to college at New York University, then completed postgraduate studies at the University of Kentucky.
She married her husband in New York, and after he died, she and her child moved back to Danville, where she started teaching at Maple Avenue School.
In 1924, she became the school’s second principal for 33 years. She was recognized as a great educator. In 1954, Business and Professional Women’s Club and other organizations named her “Woman of the Year.”.
After she retired in 1957, the Danville Board of Education renamed the school where she served as principal after her, Edna L. Toliver Elementary School, now Edna L. Toliver Intermediate School. When she died in 1979, she was buried in Bellevue Cemetery.