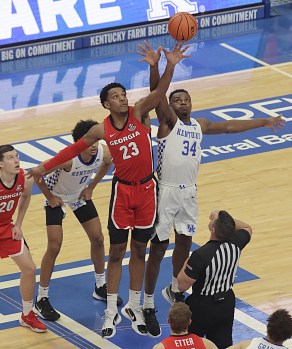 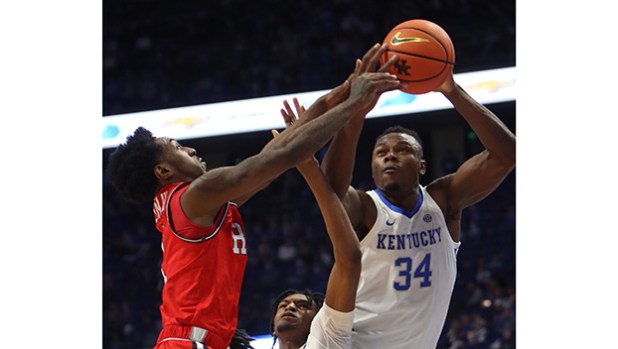 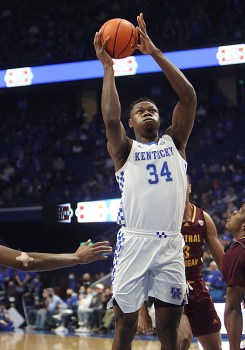 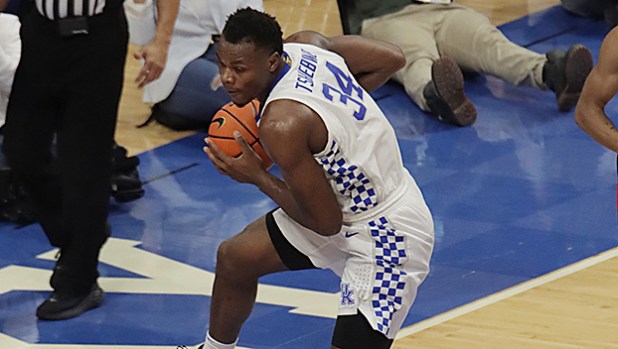 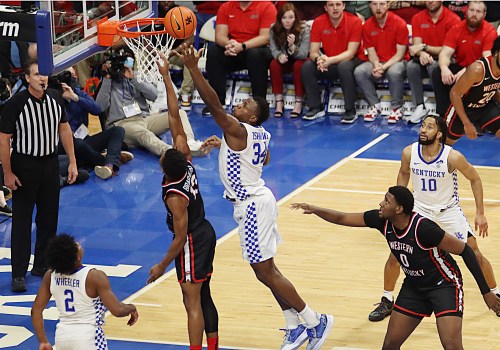 Kentucky forward Oscar Tshiebwe goes up for one of his 28 rebounds against Western Kentucky. - Photo by Jeff Moreland 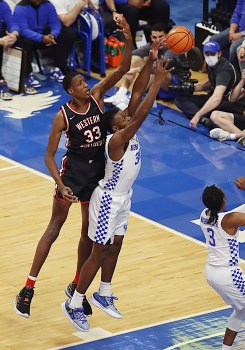 Oscar Tshiebwe pulls down one of his 28 rebounds against Western Kentucky. He set a new Rupp Arena record for rebounds. - Photo by Jeff Moreland 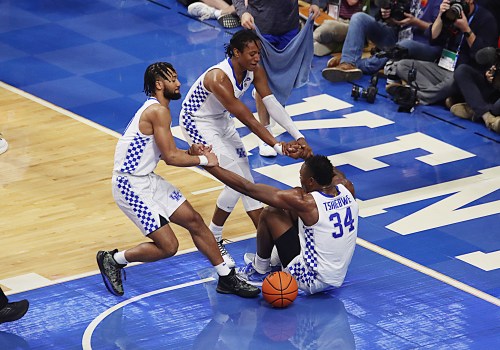 Davion Mintz (10) and TyTy Washington (3) give Oscar Tshiebwe (34) a hand up off the floor. - Photo by Jeff Moreland

If Kentucky forward Oscar Tshiebwe doesn’t win the John R. Wooden Award, given annually to the best college basketball player in the nation, it would be a complete shock to Kentucky coach John Calipari and the rest of Big Blue Nation.

A throwback to an era when there wasn’t a shot clock, a 3-point line, and offenses centered around the basic fundamentals of basketball, Tshiebwe has produced numbers rarely seen at Kentucky since Dan Issel was racking rebounds at a record rate during the 1969-70 season.

Reminiscent of Issel’s on-court presence, Tshiebwe finished the regular season with 13 consecutive double-double performances and grabbed more than 10 rebounds in 29 of 31 games. The junior forward also led the Wildcats in scoring, giving Calipari’s squad a legitimate post presence on both ends of the floor. Going into the postseason, he is averaging 17.3 points and 15.3 rebounds per game. He also collected a team-leading 58 steals and swatted 46 shots.

Although seemingly routine, sometimes Tshiebwe is amazed at his own accomplishments.

“It is amazing,” Tahiebwe said. “Sometimes I think, like how this is impossible? In college, everybody can play. … God is helping me and I’m so grateful. I just thank God for what I am doing. I don’t think I would do it on my own.”

Tshiebwe’s numbers clearly provide evidence of his dominance in his first full season with the Wildcats, but Calipari hinted voters could overlook Tshiebwe for a variety of reasons.

“That’s fine then vote for who you want,” Calipari said. “But you’ve got to explain yourself. ‘Well, he’s not a great free-throw shooter.’ I don’t know what to say. I mean, he’s done some good stuff I can tell you that I’m proud of him. And, it’s not only on the court but off the court.”

The Kentucky coach described Tshiebwe as a “model citizen.” His Christ-like example has been a welcomed addition at Kentucky, which endured a 9-16 season a year ago while battling a pandemic and a complete makeover roster.

One of those players from last season — Jacob Toppin — said Tshiebwe is “all about God” and “He preaches about God all the time.”

“He’s just an all-around positive person on and off the court, so that positivity goes a long way,” Toppin said. “When you’re happy for everyone else when you’re doing things to make everyone else feel better about themselves. Good things come to you and it’s showing from him.”

Calipari agreed and said Tshiebwe never argues with an opposing player or even a game official and just goes about his business in uniform and in street clothes.

“He’s a beautiful kid who is just playing and he’s so thankful,” Calipari said. “You know, he’s so faith-based, I mean, it’s been great. I’ve enjoyed coaching him.”

“I’m going to do whatever I gotta do,” he said. “I just have to stay focused and help this team,” adding the Wildcats will be “fighting for our life, fighting to make history” in the postseason, starting with the Southeastern Conference Tournament.

“They never forget the people who do that (win national championships),” Tshiebwe said. “We’re going to be remembered forever (if we win). If you want to see something good happen, you gotta give everything you have.”

Tshiebwe deserves to be rewarded for giving it his all this season and doing it his way.