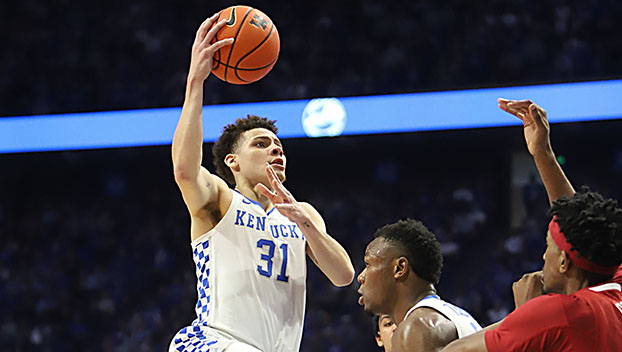 Kellan Grady drives to the basket for Kentucky. - Photo by Jeff Moreland

TAMPA, Florida (KT) — Kentucky will face Vanderbilt for a third time this season Friday in the quarterfinals of the Southeastern Conference Tournament.

The Commodores (17-15) surprised No. 6 seed Alabama 82-76 in the second round of the league tournament at Amelia Arena Thursday night. Kentucky swept Vanderbilt during the regular season, including a 77-70 victory on Feb. 19 in Lexington. Kentucky topped the Commodores in Nashville, 78-66 on Jan. 11.

“They both were wars,” Kentucky coach John Calipari said Thursday night. “I would say they’re dangerous and playing as well as anybody in our league right now. … It’s going to be a hard game for us.”

Kentucky’s biggest task will be containing Vanderbilt guard Scottie Pippen Jr., who scored 65 points combined in the losses to the Wildcats. Pippen tallied 33 in the seven-point setback at Rupp Arena and scored 26 against the Crimson Tide in a comeback from a 15-point deficit in the second half.

“In these environments, if a guy can put up 40 (against you), you are probably losing,” Calipari said.

What makes Pippen a standout player?

“He’s really crafty, and then offensively when he gets going, whether it’s shooting threes (his jump shots) he’s (hard to defend). He’s a great layup shooter. You know, he creates space, he sneaks in on pick and rolls. He’s really a crafty player with that ball.”

Oscar Tshiebwe led the Wildcats with 30 points against the Commodores in Nashville, but struggled in Lexington and managed just 11 points in the second game.

“I’ll look at the tape and look what they tried to do to him — he gets bumped and grabbed and that’s how they play him,” Calipari said. “The other thing that happened for them is their big guy is getting more comfortable. I think his first game back was us. But now, he’s getting more and more comfortable so they got one more weapon that they didn’t have early.”

Kentucky appears to be healthy going into the tournament opener, including freshman guard TyTy Washington who missed three games this season because of nagging injuries.

“I’ve been getting a lot of treatment these last few days,” Washington said. “I’ve been focusing on taking care of my body because I know with this stretch that we have coming up, we’re going to be playing a lot, with practices and playing back-to-back-to-back. It’s important not only for myself but for the rest of us to keep our bodies safe and healthy.”