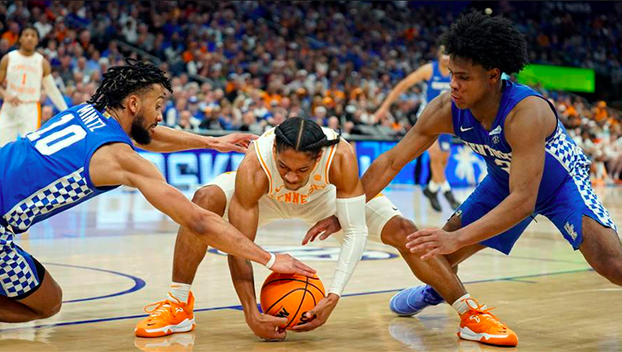 TAMPA, Fla. (KT) — The postseason opener was hard. The second one proved to be more difficult for Kentucky in the Southeastern Conference Tournament semifinals on Saturday.

The fifth-ranked Wildcats (26-7) bowed out of the tourney with a 69-62 loss to No. 9 Tennessee. The Volunteers (25-7) advance to Sunday’s final and will take on surging Texas A&M. The Aggies, who have won three in a row in the tourney, rolled to an 82-64 win over fourth-seeded Arkansas in the first game of a semifinal doubleheader Saturday.

Kentucky soundly defeated Tennessee 107-79 in Lexington on Jan. 15, but the Volunteers have now won two in a row over the Wildcats. Kentucky defeated Kentucky 76-63 a month later ion Feb. 15 n Knoxville and knocked Kentucky out of the tourney in a quest for their first conference tournament championship since 1979.

“We had our chances,” Kentucky coach John Calipari said. “We didn’t shoot the ball particularly well today. Some of that was us. Some of that was Tennessee, but we had our chances, and it shows what they (are) – they didn’t let go of the rope. It shows what their coach is about, shows what their team is about.”
Similar to its showing in Knoxville, field goals, especially from long range, were hard to come by for the Wildcats. Kentucky made just two 3-point field goals in 20 attempts. The team’s top two perimeter threats, Kellan Grady and Davion Mintz, were a combined 0-for-8 from behind the arc. Keion Brooks and TyTy Washington made the lone two 3-pointers for Kentucky.

“The looks that we got were good,” Brooks said. “It was just one of those days where the ball didn’t go in for us. There were some situations where we didn’t help each other out with getting open to get some of those shots, and sometimes we weren’t shot-ready when the ball was kicked out to us. I think for the most part, we got a lot of good looks. A lot of shots .. didn’t go our way tonight, but sometimes that happens. But you just have to continue to fight through it, and we still had a chance to win even with all that.”

In addition, leading scorer and rebounder Oscar Tshiebwe played just eight minutes in the first half because of foul issues. Tshiebwe fouled out with 3:37 remaining, but still recorded a double-double – his record 25th of the season – with 13 points and 11 rebounds. Even for his lofty standards, it wasn’t a typical performance for the junior forward.

“I think today was just kind of an off day for us, and we were missing shots,” Tshiebwe said. “We give them credit for defense. They did play good. They were hustling in every position. I think we’re good and still confident with my teammates in everything we’re doing.”

Despite the shooting struggles, combined with the absence of Tsheibwe down the stretch, Kentucky had its chances. The Wildcats narrowed a 14-point deficit to 65-62 with 1:30 left, but failed to score the remainder of the contest. The Volunteers made four of six free throws in the final 58 seconds to secure the win.

“We knew would be a physical bump-and-grind game, and I thought we held our own, but there were … when we had it to six, there were three plays back to back to back,” Calipari said. “You can’t win national championships on plays like that. You cannot because a good team will make you pay just like Tennessee made us pay. You can’t, and they were our mistakes. A back door, we were running a play. The guy went the wrong way.”

Brooks led four players in double figures for Kentucky with 19 points, followed by Washington with 17. Sahvir Wheeler followed Tshiebwe and chipped in with 10 points.

“People say, ‘Well, you might be better off to leave, go home and regroup,'” Vols coach Rick Barnes said. “I don’t know of any coaches that I’ve ever been around that thought like that.

“This time of year, every game is a playoff game. … And you want to be playing your best basketball because we also know that it can go the other way real quick. You want to keep building that momentum,” he said.