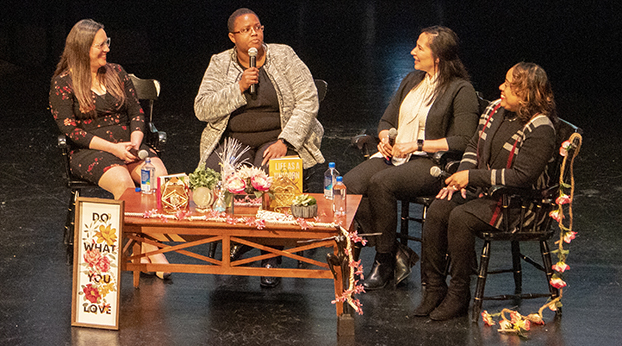 Put together by the Office of Diversity and Inclusion, the Women’s Day Convocation on March 8 allowed students and community members to hear about panelists’ lives and how they got to where they are.

The panelists Anne Turcea, LaKeysha Singleton, Angie M. Evans, and Kelenda Allen-James answered questions from both the host and attendees. Read about their individual stories and advice to women below.

Anne Turcea
Anne Turcea is the first female chief of medical staff at Ephraim McDowell Regional Medical Center. Starting her position in fall 2021, she said the role has been harder than she expected.

Serving as a liaison between staff and administration, she’s often tasked with fixing major problems. She said as the first woman in the position, people have had higher expectations of her than other chiefs of staff, likely because of her gender.

“I’ve been given this role and I’m very proud to have taken this role, but people have almost had a slight bit of an attitude of ‘here you are, we gave it to you, now show us what you can do, and we have these incredible expectations,’” Turcea said.

She discussed the glass cliff phenomenon, which is the tendency of organizations to put women in charge in times of crisis when the chance of failure is highest. Turcea said Covid-19 has wildly changed health care, and that hospital staff has had to change how they interact, making a typical day for Turcea hectic with problems to fix.

To keep her boundaries, Turcea remembers the need to be fair in expectations and careful in criticisms. She approaches each problem differently based on people’s attitudes and expectations.

Turcea has worked as an obstetrician and gynecologist for more than 18 years. Surrounded by women, Turcea said her patients are often relieved to be treated by a woman rather than a man in OB-GYN.

“Women are amazing, they’re resilient, they’re strong, and they can take on the world in ways that seem effortless; they support each other and communicate really well,” Turcea said.

Angie M. Evans
Angie M. Evans has worked in leadership positions at LG&E and KU Energy since 2015. She just accepted a promotion to the company’s parent corporation, Pennsylvania Power and Light (PPL), as chief diversity, equity and inclusion officer.

Evans is a graduate of Centre College and received her Juris Doctor from the University of Kentucky College of Law. As an African American, Evans has often been the only minority in places she’s worked.

Growing up as the only person of color in white environments, she has made it her mission to be that minority representative in corporate settings mostly made up of white men. She currently serves on seven boards throughout Kentucky.

When asked if she feels the need to fit into a mold for women in corporate America, Evans said she changes how she communicates based on the people in different environments.

As a mother who’s busy in her career, she said it’s important for women to recognize their limits and respect that each day is only 24 hours. She said with working from home during Covid-19, people have to be more cognizant of ending their workday.

“Sometimes work-life balance is work-life challenge, and I tell a lot of ladies I mentor now, sometimes you take it one day at a time, sometimes it’s one minute or hour at a time,” Evans said.

At the end of the day, Evans said she makes time for what she wants to make time for.

The law profession being mostly male-dominated, Singleton started her own practice after serving as a staff attorney and public defender.

“If no one gives you a seat at the table, build your own table, and that’s essentially what I had to do,” Singleton said.

Knowing her calling was to work in the law profession, she said opportunities presented themselves to open her firm. But she didn’t have anyone to teach her, so she learned as she went. Now, Singleton’s firm is busier than ever.

“I think that’s what makes me successful in my practice, is I didn’t have anyone holding my hand; if I was going to make it work, I would make it work,” she said.

She encourages women to seek leadership to be able to offer a different perspective than men. Working in family law as a woman allows her to connect with mothers who are dealing with child custody battles, among other things.

“I think women bring more compassion and understanding, and that’s not to say that males necessarily aren’t, but women can bring a different perspective to these situations,” Singleton said.

A Centre alum, Allen-James works to bring minority representation to technology development. She said minorities are often not thought about in designing new technology; therefore that technology doesn’t serve them.

“If you don’t reflect something in this echo chamber, it can’t be changed,” she said. “Everybody has to access technology, we all have to be in the conversations, then this will be the technology that truly changes the world for everyone.

She continued, “Being a woman, I have to bring my whole self, even if it’s the only self, to make sure these gaps are seen before we turn our whole life over to technology that was built by a small few.”

Allen-James said women in technology experience microaggressions, as the industry was built mostly by men. But she said women should stick to their goals even if it upsets people.

She said the more minorities rise up to the challenge, the more they can affect change.