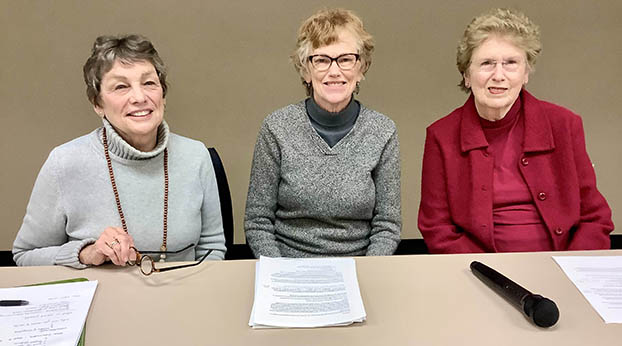 The importance of citizen input in Boyle County’s land use planning was the topic at The Women’s Network’s program featuring Smart Growth Boyle (SGB) on March 8 at the Inter-County Energy community room.

Sallie Bright, Fran Halloran, and Sarah Vahlkamp, all active members of SGB, told those in attendance about the volunteer group’s work in monitoring meetings of the Danville-Boyle County Planning and Zoning, and supporting “smart growth” principles. These include protection for agricultural and natural areas; appropriate economic development which is environmentally clean; strong neighborhoods with a range of housing opportunities; a thriving and safe downtown; and the use of infill to utilize existing commercial and residential properties within city limits.

The most current topic of interest concerns the growth of solar collectors in Boyle and surrounding counties. Although SGB strongly supports the use of solar as a clean energy source, it also supports regulations concerning environmental protections for land, preservation of prime farmland, and safety for citizens.

Our Planning and Zoning Commission is delaying approval of proposed amendments to the zoning ordinance until the Kentucky Legislature has finalized two proposed bills – SB69 and HB395 – that would provide some regulation for solar arrays.

SGB members have attended P&Z meetings to support the amendments proposed by P&Z director Steve Hunter which would require that solar arrays that generate more than 50 megawatts be located in industrial zoning.

Solar arrays that cover hundreds of acres are becoming more common around the country, and there are many factors to consider in deciding the best sites and insuring protection for landowners. A few examples of requirements SGB supports:
• Plantings under and around panels that attract pollinators such as bees and butterflies

• Proper disposal of solar panels if damaged or rendered unusable

Also discussed at the Women’s Network meeting was the importance of protecting Boyle County’s agricultural heritage. An estimated 1.5 million acres of farmland are lost each year across the U.S., according to the American Farmland Trust, which also ranks Kentucky as one of the states most vulnerable to loss of farmland.

While planning and zoning do help to keep land zoned agricultural from being developed, many local zone changes in the past few years have allowed farmland to become residential, commercial, or industrial. How do we stop this trend and also help landowners who are not making enough profit farming?

SGB has researched a program called Purchase of Development Rights (PDR), which has been the answer for many places, including Fayette, Scott, and Boone counties.

PDR programs use public funds to purchase “development rights” from landowners who want to participate, so the landowner realizes a profit while also continuing to farm. The land stays agricultural, even if it is sold.

Issues such as solar sites and preserving agricultural land are what motivate members of SGB to spend time and energy on informing the public and helping to find solutions to benefit our county.