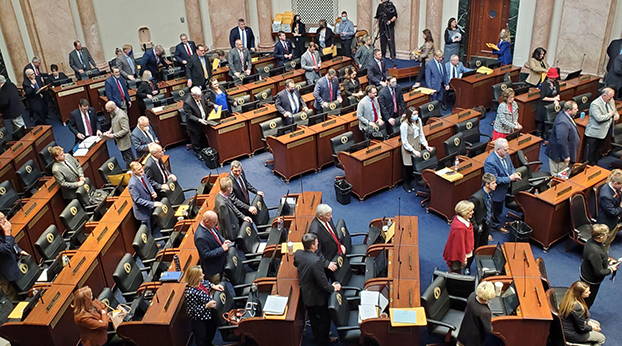 Kentucky legislators continue in session at the state capitol in Frankfort. - Kentucky Today

FRANKFORT, Ky. (KT) – The House voted to override Gov. Andy Beshear’s veto of the bill reducing unemployment benefits, a measure to equalize tax rates on different forms of pari-mutuel wagering in Kentucky, and one that would fund a problem-gambling commission.

House Bill 4 would make several changes in the state’s unemployment system, which supports say would strengthen the UI program.

It would reduce from 26 to 24 the total number of weeks someone could collect unemployment, but it could drop to as little as 12 based on the unemployment rate, although someone engaged in a training or certification program could receive an additional five weeks of benefits.

HB 4 would also increase the number of companies that must be contacted from the current one per week to five.

Beshear took issue with using a statewide index to change the number of eligible weeks, in a Facebook video post.

“The number of weeks you can get in eastern Kentucky is factored in with the most populated counties that have the lowest unemployment rates,” he said. “What it’s going to do is lead to the further depopulation of parts of eastern and western Kentucky, where people are going to be forced to move, instead of giving those communities the time they need to get back up on their feet, after being knocked down by a changing economy?”

However, the House voted to override the veto by a 57-38 vote. The Senate must also vote to override, and if successful, HB 4 would become law.

In other action, the House approved HB 607, which would equalize the tax rate for all pari-mutuel wagering.

The sponsor, Rep. Adam Koenig, R-Erlanger, said the tax rates for the various types of wagering currently range from 0.5% on historical horse racing machines, to 3% for on-track simulcast wagering.

Some of the additional revenue would go to the University of Kentucky and Bluegrass Community and Technical College equine industry programs, like the University of Louisville program that already receives funding from the taxes.

Koenig was also the sponsor of HB 609, which would establish and fund a Responsible and Problem Gaming Commission. His original bill would take the $225 million received in a settlement with PokerStars last year to fund the problem gaming commission.

However, some members thought that was too much money, so they approved a change lowering the appropriation to $50 million, before approving the bill, 81-14.

Both measures now head to the Senate for their consideration.