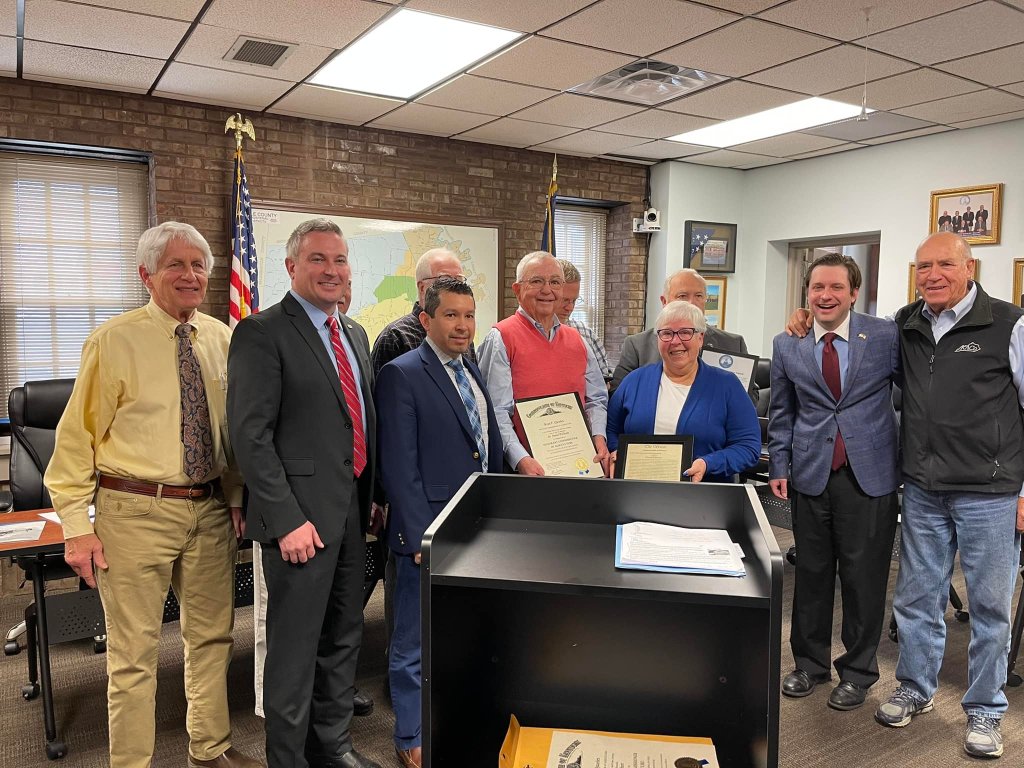 Local agriculture leader David Williams and his wife Betty-Gayle (middle) were honored with three awards by the Boyle County Fiscal Court, Commissioner of Agriculture Ryan Quarles (second from the left), and Representative Daniel Elliott (second from the right). Magistrates are also in the photo. Photo courtesy of the Fiscal Court Facebook page.

Williams is the owner and president of Burkmann Industries, based in Danville. Burkmann owns 13 animal feed manufacturing plants and 17 retail locations. Williams was recently inducted into the Kentucky Cattlemen’s Association Hall of Fame.

In celebration of Williams’ achievements in the field of agriculture, he was presented with three awards at the court meeting.

Quarles gave Williams a certificate making him Honorary Commissioner of Agriculture. Elliott presented citations of achievement adopted by the Kentucky General Assembly for both David Williams and his wife Betty-Gayle, on behalf of the president of the Senate, the speaker of the house, and members of the General Assembly.

Boyle County Judge-Executive Howard Hunt presented Williams with an Excellence in Agriculture award signed by Hunt and all six magistrates.

“Kentucky is in a strong position right now and it’s never had the leadership as an industry as it has right now under Commissioner Quarles,” Williams said. “I’m honored that he would take his time to spend the morning with us.”

Williams received his B.S. degree in Agriculture at the University of Kentucky. His Master’s degree in Animal Nutrition was earned with research emphasis in beef cattle. His Ph.D. in Ruminant Nutrition included research in early weaning beef calves and feedlot studies with Holstein beef.

At Iowa State University, Williams taught Feeds and Feeding, Livestock Judging and Animal Science 101. He was faculty advisor for 58 Animal Science undergraduates. Over his career, Williams was a staff member at the University of Kentucky, and became the nutritionist and director of compliance for the Farmers Friend Mineral Company in Louisville, where he developed the famous MediPac Mineral.

Williams was the first, and as of 2012 the only, animal scientist in the world to develop a cattle mineral containing Rumensin to be approved by the U.S. Food and Drug Administration for free-choice feeding.

Williams served as treasurer of the Kentucky Cattlemen’s Association from 2001-2011. He has served as director of the Kentucky Feed and Grain Association, United Way, Chamber of Commerce and Kentucky Ag Heritage Center. He is currently a member of the Federal Reserve Bank Agriculture Advisory Council and chairman of the board of Ephraim McDowell Regional Medical Center.

The court had plans to also recognize Secretary/Treasurer at Boyle County Farm Bureau Terry Gilbert, but she could not make it to the meeting.

• Heard a presentation by Casey Smith from the Cabinet for Transportation District 7 office in Lexington about the Rural Secondary (RS) program. The RS program is funded by 22.2% of the motor fuels tax revenue, and funds are used for the construction, reconstruction, and maintenance of secondary and rural roads in each county.

The court approved the cabinet’s recommendation to use general RS funds to improve Kentucky 1822, or Quirks Run Road, for 2.8 miles; and Kentucky 1273, or Chrisman Lane, for 1.7 miles. Construction won’t begin until 2023.

The court approved a motion to keep the flex funds for county road maintenance. The cabinet had recommended the funds be used for Kentucky 37 for 1.2 miles.

As for previously approved projects, Smith said they will start work on Gentry Lane and Brumfield Road at the beginning of this construction year.

• Due to some heavy snow this winter, magistrates said potholes have been a major problem. They discussed several county roads that need potholes filled.

Public Works Director Duane Campbell said the road department has shoveled over 20 tons of patch material for potholes so far this year. He said the state has put out over 45 tons. He also said asphalt prices have increased by $10 a ton.

Citizens can report any potholes by calling Public Works or magistrates of their district.

• The CASA of the Bluegrass 2022 gala will be April 29 at the Danville Country Club.

• Hunt and other magistrates attended the Forkland pie auction and spaghetti dinner on Saturday. Magistrate Tom Ellis said they raised the highest amount of money in the auction’s history.

The total amount of money raised for the center was just over $10,000. The money goes to upkeep of the building, which was built in the 1920s as a school.

2022 is the 50th anniversary of Forkland purchasing the Forkland School to turn into a community center.