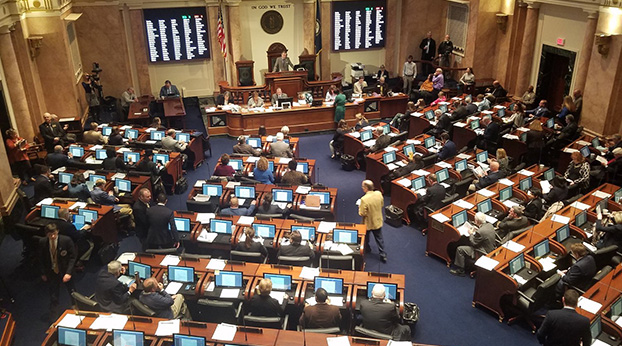 FRANKFORT – House Bill 3, also known as the Humanity in Healthcare Act, passed out of the Senate Health and Welfare Committee on Wednesday morning.

Rep. Nancy Tate, R-Brandenburg, said the intent of the bill is not to eliminate abortions in Kentucky. That action was already taken by the General Assembly when the legislature passed a heartbeat bill during the 2019 regular session.

“Rather, the intent of House Bill 3 is to ensure that, while abortions are legal in Kentucky, we want them to be as safe as possible,” said Tate, the bill’s primary sponsor.

• Providing for the dignified disposal of fetal remains;

• Omitting taxpayer dollars from funding abortions in the Commonwealth;

• And providing the Attorney General of Kentucky authority to demand extradition of individuals charged with violating the medical abortion distribution component who are found in other states.

Addia Wuchner, executive director of Kentucky Right to Life, defended the medical abortion regulations that will require a patient to receive the drugs from a physician or medical provider.

“We know that Kentuckians do not often seek the medical care that they need,” said Wuchner, a former representative and registered neo-natal nurse. “Why wouldn’t we want that woman, no matter what her age is, to see a medical provider…versus getting those medications through a mail order from out of state or a mail order distribution center?”

Several others spoke in opposition of the bill, including a sexual assault survivor who testified the judicial bypass modifications would have created barriers to obtaining an abortion had she become pregnant as a result of the abuse. An attorney who walks young women through the judicial bypass procedure also said HB 3 would make it more difficult for her clients to navigate the process.

Kate Miller, the advocacy director of the ACLU of Kentucky, expressed appreciation for Tate’s responsiveness and recommended several modifications to a committee substitute—including the situations in which fetal remains can be transported and the presence of an emergency clause.

“There are certain elements of this bill that could go into effect immediately, but quite a few administrative regulations need to be promulgated and we don’t think that that can be done immediately,” Miller said. “And so, no one will be able to comply.”

Committee Chair Sen. Ralph Alvarado, R-Bath, said HB 3 may see an amendment when it heads to the Senate in light of Wednesday’s testimony.

HB 3 passed 8-2 and will be reported favorably to the Senate floor.

Pancake and waffle mix sold in Kentucky is recalled