A Trashed Bracket and a Blue-blooded Final Four 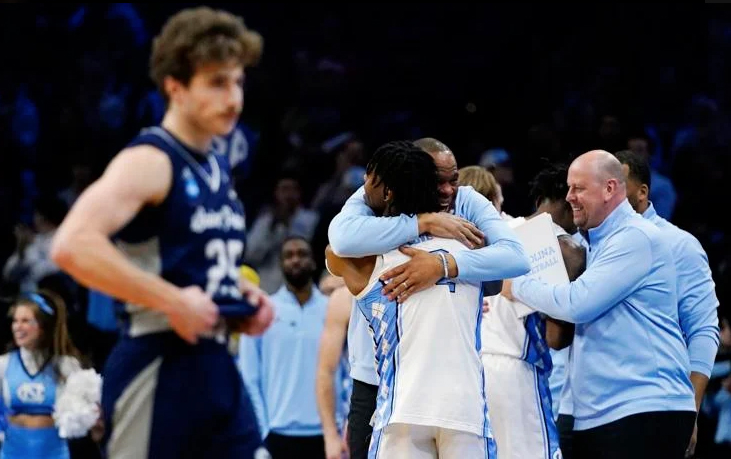 North Carolina's Hubert Davis and Caleb Love celebrate after a college basketball game against St. Peter's in the Elite 8 round of the NCAA tournament, Sunday, March 27, 2022, in Philadelphia. (Photo from Kentucky Today)

I filled out my NCAA Tournament bracket in Indianapolis and had Kentucky winning it all. We all know how well that bracket aged. It ended up in the trash can.

Ever since the Wildcats’ season ended following an 85-79 loss to surprise East Regional finalist Saint Peter’s on March 17, I’ve followed the tournament closely and I’ve even been watching the National Invitation Tournament, too.

Like many of you, I marveled at the Peacocks’ stunning upset of the Wildcats, followed by a win over Murray State in Indianapolis. The magic continued in the Sweet Sixteen with another victory, this time over Purdue, before Saint Peter’s ran out of luck in a loss to North Carolina on Sunday in Philadelphia, dashing any hopes of a Cinderella team making an appearance in New Orleans.

Instead, four teams — Kansas, North Carolina, Villanova, and Duke – with strong pedigree will tangle for the title with Tobacco Road rivals Blue Devils and Tar Heels meeting in one of the two national semifinal games in what will be Duke coach Mike Krzyzewski’s last game against rival North Carolina. It’s also the first time the teams have ever met in the NCAA tournament.

Many didn’t see that one coming, but then again this is March, and anything can happen. Saint Peter’s proved that during the first two weekends of the tournament.

Kentucky played against three of the four teams competing for a national title in the regular season and handed Kansas a rare loss at historic Allen Fieldhouse on Jan, 29 in Lawrence. The Wildcats also defeated the Tar Heels soundly, 98-69, on Dec. 18 in Las Vegas in the CBS Sports Classic. Duke defeated the Wildcats 79-71 in the State Farm Champions Classic at Madison Square Garden on Nov. 9.

Looking back, maybe the Wildcats peaked too early and cooled off in March, which typically hasn’t been the case for John Calipari’s teams, not only at Kentucky, but also at Memphis and UMass.

North Carolina and Kansas recovered nicely from their setbacks to Kentucky. Kansas went on to win the Big 12 regular-season and conference tournament titles, while the Tar Heels spoiled Mike Krzyzewski’s last game as coach of the Blue Devils at Cameron Indoor Stadium.

While the Wildcats sat idle, the Jayhawks surpassed Kentucky in all-time collegiate victories and has a two-game lead, 2,355-2,353, going into the final weekend of the season. Combined with the Wildcats’ 9-16 campaign last year and an early exit from the tournament this year, Kansas has capitalized to sit at No. 1 in the all-time standings.

Considering just one Southeastern Conference team — Arkansas — advanced to the Sweet Sixteen, it makes you wonder if Texas A&M should have received a bid, given the Aggies’ success in the SEC Tournament.

We will never know, but the four teams remaining have been playing their best basketball when it matters the most and are reaping the rewards.

That’s what makes the NCAA Tournament so special.