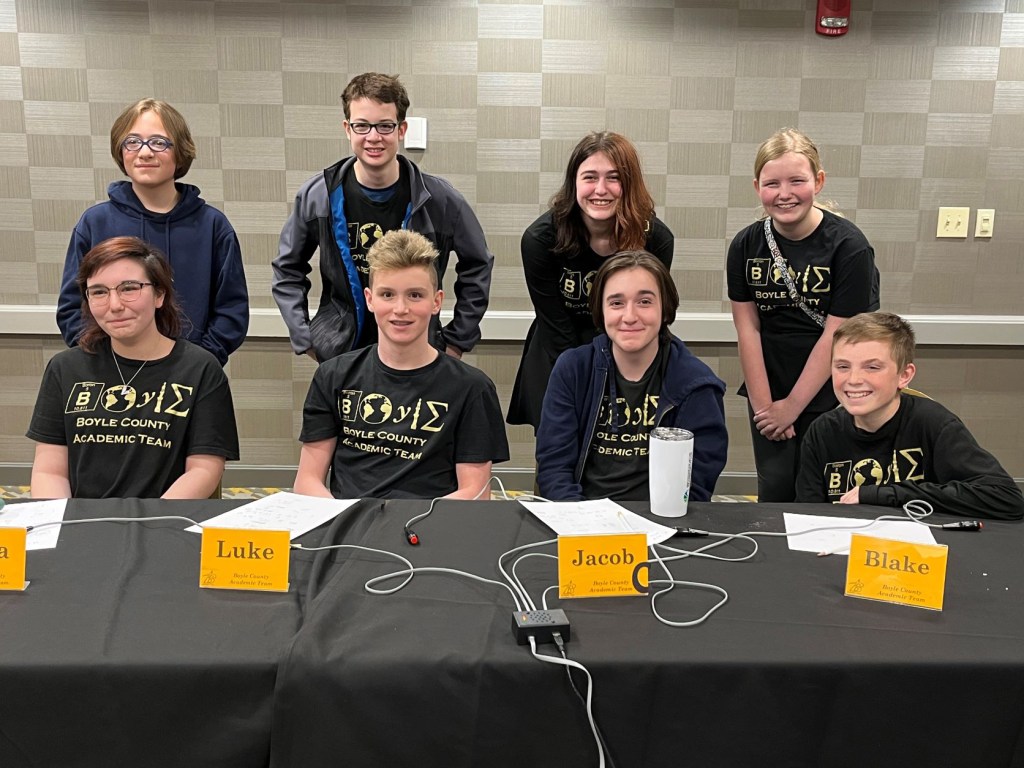 Boyle County Middle School’s quick recall team made it to the “Sweet 16” at the State Governor’s Cup on March 20.

Held at the Galt House in Louisville, the Governor’s Cup featured about 46 teams out of 350 in Kentucky. Teams start at the district level, then advance to regionals, then state. The state held one on one elimination competitions; the final round being the “Sweet 16.”

Though the middle school has made it to state in the past, they had never made it that far in the state rounds. The last time they went to state was 2008; before that, they went six other times since 1990.

Boyle’s team was undefeated heading into state competition. In the overall 2022 season of 12 matches, they won 10 and lost two. They won the district and regional championships in both quick recall and future problem solving.

At state, the team was eliminated in one on one matches in the final 16 round, and remaining teams competed in pairs until one team finished as the champion.

Team Coach Tyler Murphy said many schools that compete at state are high performing programs, and those schools have gone to state year after year.

“We’ve really elevated our program to the level that these kids are able to compete with some of the top schools in the state,” Murphy said. “The fact that we were able to put in the work, time and effort to compete at that level speaks to the strength and dedication of our students.”

Quick recall competitions are similar to trivia quiz bowls. In two teams of four, students hit a buzzer to respond to questions. Whoever buzzes first gets to answer, and if they are correct, that team gets a bonus question.

The main subjects of quick recall are math, science, social studies, language, arts, and humanities. Students have to be well-versed in virtually every subject.

“I like the breadth and depth of knowledge that’s required; there’s so many random questions you could get, and it’s knowing the skills and strategies of responding quickly,” Murphy said.

Murphy serves on the board that facilitates the Governor’s Cup, called the Kentucky Association of Academic Competition. He also competed on quick recall teams as a student. Now he teaches AP and regular government, and AP world history at Boyle County High School.

“The most energizing part is working with the kids and seeing them grow and improve over the course of the year,” he said.

Murphy’s team competes in scrimmage-style quiz bowls about every other month to keep their skills sharp. They have one more competition for the school year in April.