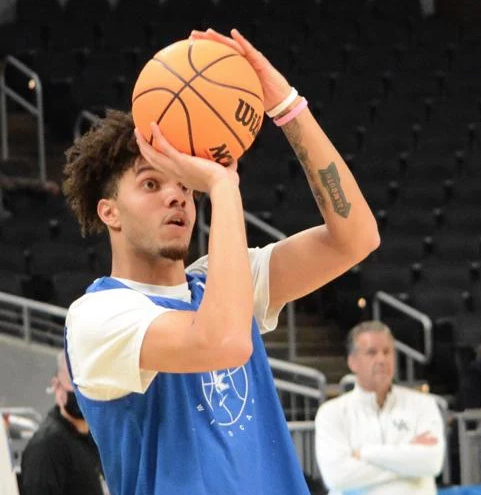 Dontaie Allen puts up a shot during a practice last Thursday in Indianapolis. Allen announced his plans to enter the transfer portal on Thursday. (Keith Taylor/Kentucky Today)

Dontaie Allen will finish his collegiate career at somewhere other than the University of Kentucky.

“This journey has been like no other,” he said in a social media post. “I can’t thank Big Blue Nation enough for embracing me unconditionally through the highs and the lows. A kid from Kentucky given an opportunity to play for his dream school.”

Allen played limited minutes this season after making more than one 3-pointer in eight games last season. His biggest performance was a 23-point outburst in a 78-73 overtime win at Mississippi State on Jan. 2, 2021. He played in just 19 of 34 games this season and averaged 2.2 points and 1.2 rebounds off the bench. He managed just five total minutes during the final two months of the season.

“He battled to overcome an injury early and never let the adversity change who he was,” he said. “(I’m) proud of you Dontaie. Thank you for the last three years and I wish you nothing but success on your journey.”

Allen thanked his coaches, teammates, trainers and staff and “everyone who made my last three years so special.”

“Lexington Kentucky will forever be home,” he said.