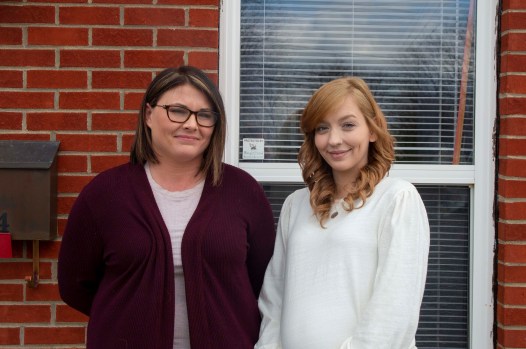 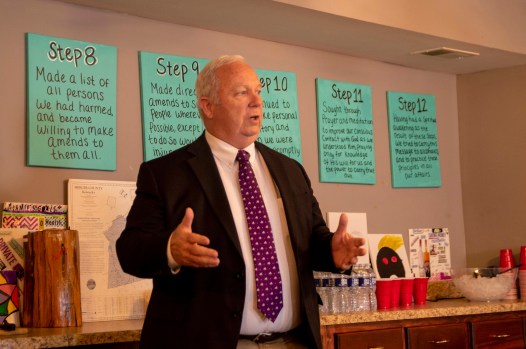 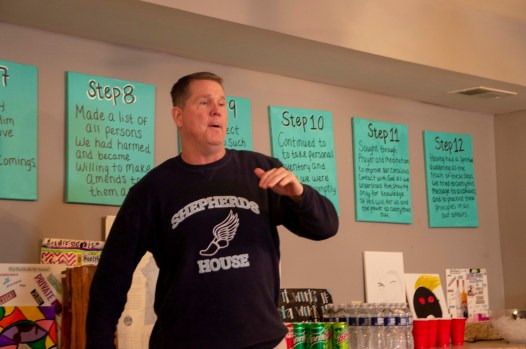 Shepherds House CEO and President Jerod Thomas spoke about how much the Boyle County treatment center has grown and helped the county. 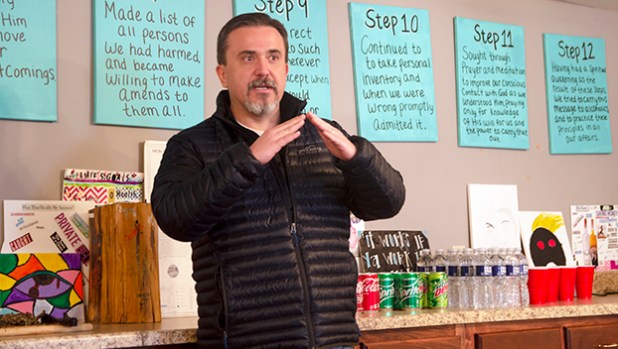 The Shepherds House program in Boyle County celebrated its five year anniversary with a gathering of its supporters and participants on Friday. Graduates of the treatment center shared their stories of addiction and recovery.

Shepherds House is an addiction recovery program based in Lexington with locations throughout Kentucky. President and CEO Jerod Thomas started the program in Danville not knowing how successful it would be. He said people in the community have always stepped up to help the program, and that their answer is always yes. 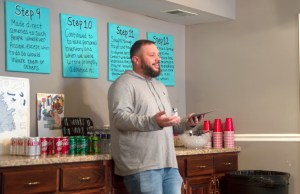 The Danville facility started with a day reporting program, which helps people released from jail figure out their next step. Now, they have an intensive outpatient program, a women’s house, and offer peer support to people dealing with family court cases, among other things.

They have six full time employees, all of whom have struggled with addiction and gone through recovery.

“I run a company that’s in seven counties; we have 17 treatment centers that treat over 500 people a day, and you don’t work in my company unless you’re a drug addict,” Thomas said during the gathering when supporters made speeches.

“When people are at their lowest point in their lives, Shepherds House has that hand to lift them up,” Hunt said. “This organization, along with support through the detention center and elsewhere, we’re giving people a genuine opportunity to change their lives for good, and you don’t get that everywhere.”

Thomas also thanked Jailer Brian Wofford and County Attorney Chris Herron for helping identify people who would benefit from Shepherds House, and all of its other supporters who love helping people recover from addiction.

Two Shepherds House employees had struggled with drug addiction before coming to the program. Read about their stories below.

Ashley Dowell
Ashley Dowell struggled with heroin and methamphetamine addiction for more than 10 years. She started drinking as a teenager, which escalated when she went to college. When she dropped out of college due to the drinking, her addiction escalated to opiates, then heroin.

She struggled with being in a toxic relationship for six or seven years, which was hindering to recovery. She lost her husband to an overdose. Her kids were taken away at her lowest point.

Dowell tried going to rehab centers, but she would relapse as soon as she got out. With five or six tries at recovery, she would go back to her old ways over and over, expecting different results.

Her family court case is ultimately what brought her to Shepherds House. After attending in-patient treatment, Dowell attended the intensive out-patient program (IOP) at Shepherds House for six months by the family court’s recommendation.

“It was really difficult for me and I was in a really bad place when I came to the Shepherds House,” Dowell said. “I went through the program, they gave me the resources I needed to maintain sobriety, and along the way I developed a passion for it.”

Dowell graduated from the IOP in fall 2019. She has been sober since April 19, 2019. After graduating, Dowell volunteered and eventually was hired as Admissions Coordinator for Shepherds House.

She also works as a peer support specialist for people with family court cases. She helps mothers and fathers work on case plans, and helps them get resources like treatment, case management, and doing sessions with them whenever needed.

She is now a junior at Campbellsville University studying social work. Dowell wants to work in the addiction field, possibly in case management, as an alternative sentencing counselor, or she might get a master’s degree for substance abuse counseling.

“Shepherds House is where I really found my support; they introduced me to support groups and that’s where I found that long term support,” Dowell said.

Tayah King
Tayah King struggled with heroin and methamphetamine addiction before coming to the Shepherds House. Because of her addiction, she lost her kids, her home, and became homeless living in a truck.

Dealing with her family court case, King was in and out of treatment centers in 2020, but wasn’t truly ready to get better. She knew what she had to do, but wasn’t in a place to work on herself.

“I missed my kids, I missed everything and how life used to be,” King said.

She contacted Roger Fox at the Shepherds House in August 2020, asking if she could attend the IOP. She did well at the program for three months. But in December, she suffered a relapse.

King missed a week of the IOP, but then went back and admitted what happened. She went to in-patient treatment in December, then came back to Shepherds House and completed the program.

The IOP offers treatment from 9 a.m. to 3 p.m. Monday through Friday. In the morning, participants attend meditation, then go to various groups including AA meetings. They also attend the Circle of Hope job initiative, where they get resumes and references together to job hunt. Participants also see a therapist every week.

King graduated from the IOP in February 2021. However, after starting to casually drink, she learned she also struggled with alcohol. She was able to quit drinking on her own after a month, and kept coming back to Shepherds House for support.

King was able to get her youngest daughter back, and got visitation rights for her other kids.

She got a job at Shepherds House collecting drug screens. King just celebrated one year of sobriety.

“I hope to stay with Shepherds house, they have done a lot for me, and I would love to continue to help give back in every way possible,” King said. “It is possible to get your life back together and be a parent; you can always do better than what you have been.”