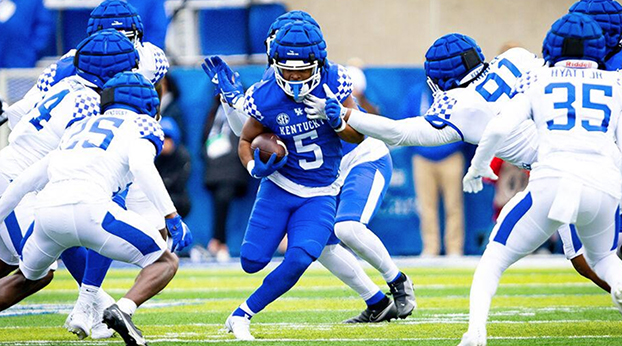 Mike Drennan makes a run during the UK Blue-White scrimmage on Saturday, April 9, 2022 at Kroger Field. (Photo by Les Nicholson)

LEXINGTON, Ky. (KT) — The weather resembled winter prior to Kentucky’s spring football game Saturday at Kroger Field. However, a snow-covered field was all clear by the first snap of a contest dominated by the offense, which produced 32 points against the team’s defense in the team’s first spring game since 2019.

“We were basic on both sides of the ball, but still, it’s a fundamental game,” Kentucky coach Mark Stoops said.

The first peek of new offensive coordinator Rich Scangarello’s offense didn’t reveal much from a schematic standpoint, but playmakers are starting to emerge as he prepares for his first season.

As expected, quarterback Will Levis was impressive in limited action. While on the field, Levis completed seven passes on eight attempts for 98 yards and two touchdowns in the first half.

“It was nice to see Will (Levis) be efficient,” Stoops said. “We all know how talented he is and the arm talent, but it was nice to see some of the receivers step up and make plays for him, and I thought all the quarterbacks did a nice job. Between the tight ends, the backs, Chris (Rodriguez) made a really nice catch to score, I think it was on a third-down (play), which was a really nice play.”

The four signal-callers threw passes to 14 different receivers, with Tayvion Robinson, a transfer from Virginia Tech, and former Frederick Douglass star Dane Key providing the bulk of impressive catches. The two receivers combined for 85 yards and a touchdown, while Rashaan Lewis had three catches for 54 yards in the second half. Overall, nine receivers had a catch that totaled more than 10 yards.

“When it’s all said and done, we’re very excited about where we’re going,” Stoops said. “Again, we were relatively basic today, but there’s quite a bit of carryover that you can see some nuances.

“You probably aren’t used to seeing a fullback back there sometimes, so that’s a little different, but really you’re just moving the tight end around when you’re playing with 12 personnel and how you move them and what you do with them and create different looks. But there’s a lot we can do that way, but we’re excited about where we’re heading with the offense.”

Veteran Chris Rodriguez played just one series and accounted for 32 yards on a 65-yard touchdown drive engineered by Levis to open the scrimmage. He capped the drive with an 8-yard pass reception from Levis. Kavosiey Smoke and Mike Drennan combined for 100 yards rushing. Drennan scored two touchdowns and a 16-yard run, the longest run among the four running backs.

On the defensive side of the ball, instate product Jordan Lovett (North Hardin) led the Wildcats with nine tackles. He added a pair of pass breakups, a quarterback hurry and forced a fumble in the second half.

“I’m expecting more out of him,” Stoops said. “I want to continue to push him to be what he can be. It’s not that I’m down on him, it’s just that I want him to continue to approach it in a very mature way. When you take the field in a scrimmage, in practice, in a game like today, you have to grow from that. You have to get better.”

The Wildcats will conclude spring workouts with two practices next week and Stoops expects the same consistency his team displayed on Saturday.

“I’m around them all the time, and their approach is very consistent,” he said. “We’re constantly striving to get better. As I tell them each and every day, each person needs to take that and fundamentally try to get better in any area of weakness or the things they do well, continue to do well on it. The things where they’re falling short, work hard at it, and if they individually get better, then we can’t help but collectively, as a group, get better,. But you have to have that mindset each and every day.”