SPAN organization donates $40,000 to Kendyl and Friends for a disability recreation center in Danville 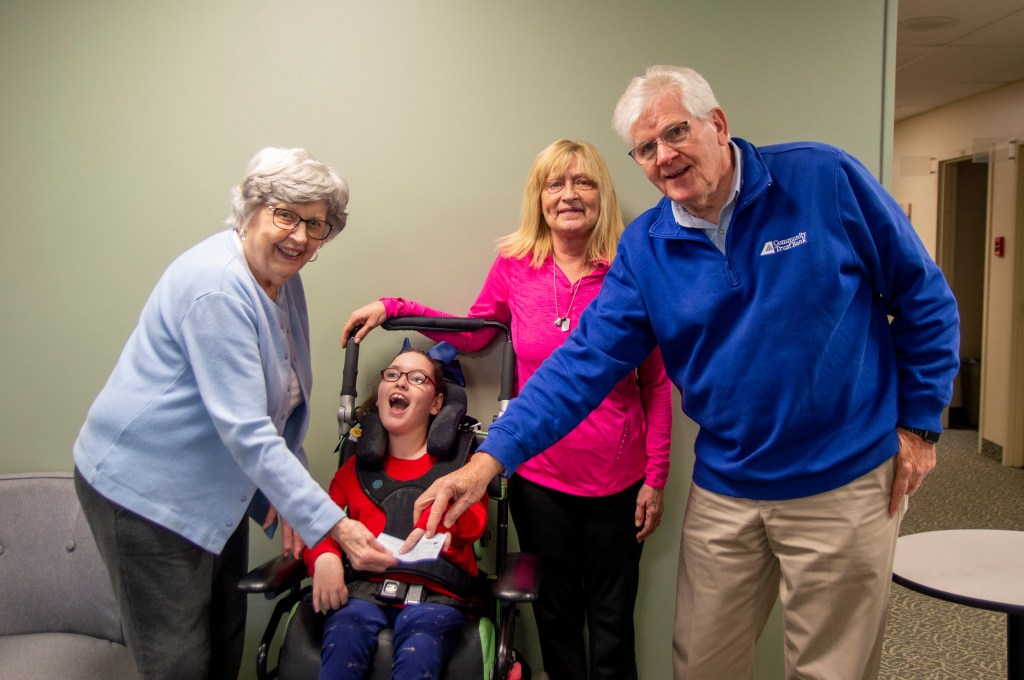 Members of the Special Persons Advocacy Network hand a check for $40,000 to Kendyl of Kendyl and Friends for a new disability playground and recreation center. Left to right: Lou Ann Abbott, Kendyl, Sharon Blankenship, David Maynard

The Special Persons Advocacy Network (SPAN) gave a check for $40,000 to the Kendyl and Friends Foundation on Tuesday.

Kendyl and Friends will use the money to build a recreation center for kids and adults with special needs. It will have a gym, baseball field, indoor/outdoor playgrounds, aquatic center for therapy, and exercise equipment. They bought a piece of land just north of Danville across the street from Danville Christian Academy, next to the radio station.

Kendyl and Friends is a nonprofit that builds playgrounds for children with disabilities. Its founder Crimson Claycomb named it after her daughter Kendyl, who is disabled.

When Kendyl was three weeks old, she began having seizures. After extensive tests, Kendyl was diagnosed with meningitis and slipped into a coma.

She recovered from the meningitis, but after more health concerns, Crimson learned that Kendyl had seven brain tumors, was partially blind in both eyes, would be non-verbal, and would be wheelchair-dependent for the rest of her life. When Kendyl was in kindergarten, Crimson found it difficult to navigate her wheelchair around playgrounds or help her play with other kids.

“It’s so hard to find resources for people like her, and once you do find them, you have to drive two and a half hours both ways sometimes,” Crimson said.

So she started the nonprofit to help kids with disabilities be able to enjoy playgrounds with other kids. They have built nine all-inclusive playgrounds around Kentucky, and they have three more that are almost fully funded.

The playgrounds all have wheelchair-accessible equipment with ramps up to slides, and large swings, among other things. The recreation center in Danville might be their biggest project yet.

“We dream big, but we’re determined, we’re going to do it,” Crimson said.

SPAN was able to raise the $40,000 through yard sales, pizza sales, auctions from donated items, and some people did fundraisers on their behalf. David Maynard, who is a member of SPAN and market president at Community Trust Bank, said they are always raising money for activities for people with disabilities, and the playground center will be a huge benefit to the community.

“A lot of people who have these children are with them 24/7, they don’t get any time to rest,” Maynard said. “This will provide that respite for the mothers and fathers for them to take their child there.”

SPAN is a volunteer organization that raises money for and supports people with disabilities. They host activities and sponsor events for people with special needs and their families.

SPAN also works with programs like Best Buddies. A program of Centre College, students who sign up for Best Buddies get partnered with people with special needs to go on outings. The program has outings every month, and they’re usually based around that month’s holiday. SPAN sponsors the program to provide food each month.

It started in 1997 by Lou Ann Abbott and Sharon Blankenship, and became a nonprofit agency in 1999. They are celebrating the 25th anniversary of SPAN next month.