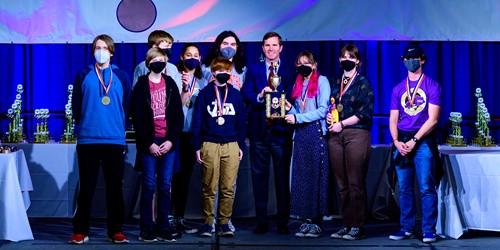 Danville High School’s Academic Team had great success at the State Governor’s Cup Competition March 19-21. The Quick Recall Team finished tied for 5th place and was a quarterfinalist, and once the individual students’ results were added, the Academic Team finished 12th overall.

The quarterfinal finish is the team’s best since 2008. The team has had five appearances in the top 16 teams since then, but this year they were able to meet Governor Andy Beshear onstage, as the top eight teams are awarded trophies and points that go toward their overall score.

“I’m incredibly proud of the team and the work they’ve put in over the last couple of years,” said Academic Team Coach and Math Teacher Rob Kremer. “We’ve qualified for state by winning our region 18 years in a row, but making it to the top eight against that level of competition is never guaranteed. I’m thrilled that this group was able to finish how they did.” 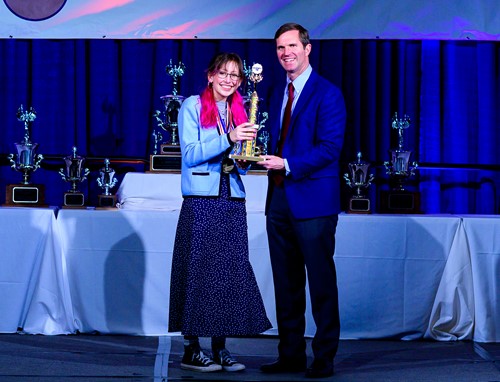 Kremer said the team had a close call at their regional competition in February, so the team knew they had to “kick things into high gear” if they wanted to perform well on the state level.

“They put in a ton of work and time studying in the month between Region and State,” he  said. “I love seeing their work get rewarded in this way and I love seeing them remind everyone that had forgotten that Danville is one of the best teams in the state.”

Now that the state competition is over, the Academic Team will be competing in the National Academic Quiz Tournaments Small School National Championship April 22-24.

Kremer said, “It’s a different format than our State competition, but I’m really excited to see how this group performs at that level!”