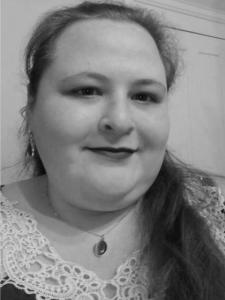 Johanna Michelle-Bess Cespedes, 35, of Stanford, KY, passed away on February 3rd after a valiant battle with uterine cancer.
Johanna was born on September 21st, 1986 to Jorge Cespedes and Jeanette Sheldon in Fairfax, VA. After graduating from Danville High School (KY) in 2006 she stayed local to the Danville area and worked with O’Charleys for the past nine years, effectively becoming her second family.
Growing up she was always surrounded by family. Family was a priority for her. Whether it was to buy random gifts for strangers or to spoil her nephew, it was all the same to her… you were family. She had developed an interest in crafting and had created several works of art using different mediums. Even though she didn’t drive, she still managed to add stamps to her passport. Whether she traveled to Scotland or sailed the Caribbean, she learned to live the life she wanted. At passing, she didn’t have any regrets. She was ready to move on to the next part of her journey, to that nice little mansion in the sky.
Johanna is predeceased by her father Jorge Cespedes. She is survived by her grandfather Richard Littlefield; mother Jeanette Sheldon; step-father James Sheldon; step-mother Elizabeth Hernandez; sister, Jennifer Cespedes (Hansol) ; her five brothers, Leonard, Anthony (Brooke), Jonathan, Jeffery (Marcella), James; nephew’s Cole and Dominic; and her niece Gabriella.
There will be a memorial service held at the Sheldon residence located at 550 Foster Lane in Stanford, KY on April 23, 2022 at 2:30 p.m. In lieu of flowers, please consider a donation to the American Cancer Society or the University of Kentucky Markey Cancer Center.