Progress: Burke’s Bakery worker says staff being family is just the icing on the cake 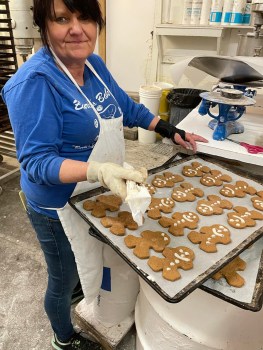 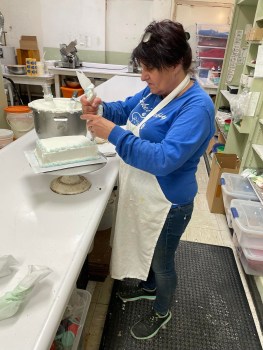 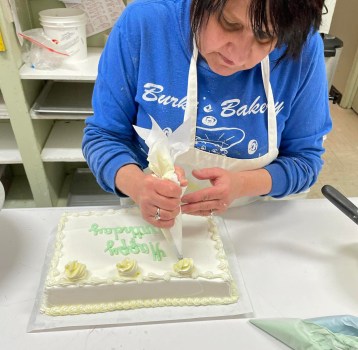 Sabirah Gainey puts the finishing touches on a cake. - Photo by Bobbie Curd 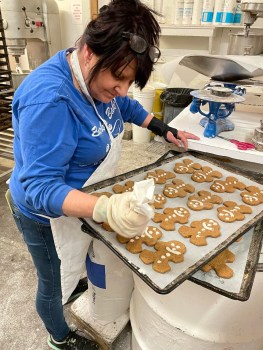 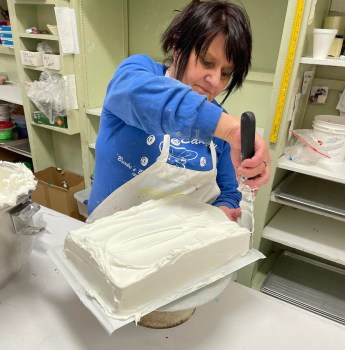 This is part of an ongoing series of stories that focuses on people, many of whom work around the clock to make our community a great place to live. A new story will be published in the Friday edition of The Advocate-Messenger throughout the series.

Most would consider 3:45 in the morning to be “the middle of the night.” But for Sabirah Gainey, that’s when she clocks into Burke’s Bakery six days a week.

A Danville native, Gainey says she will have worked for Burke’s 12 years come June. “I needed a job really bad, and Patty (Burke) only had part-time, she said she was afraid I’d quit. I said ‘honey, part-time is better than no time.’ And within a week, I was full-time.”

Although she had decorated cakes when she worked for Winn-Dixie, “that had been 30 years. But I picked it back up.”

Gainey also paints and makes wreaths on the side as a hobby. “I’m pretty crafty like that,” she says and chuckles.

Sure, 4 in the morning is early for most, but for everyone at the bakery, Gainey says, “We pretty much are wide awake. The odd thing, too, with night shift is — others who worked odd hours would be eating a burger at 8 a.m., and I’d be like ‘how are you doing that?’ But now I understand, because it’s our lunchtime at 8 …”

She said early mornings are the busiest times at Burke’s. “We are getting everything prepared and made for opening, orders are going out on delivery, so we’re focused and busy.” Gainey says the time goes by pretty quick.

“To me, it’s like my family there, I’ve been there so long. I’ve gone through so many heartaches, and they’ve helped me through all of them. I couldn’t imagine being anywhere else.”

After having a difficult few years, which included her son breaking his back and the death of her grandbaby, Gainey says it’s been hard on everyone. “So this place, they’ve seen me at my best and at my worst. But I try to stay upbeat.”

She says work helps with that. “I really wouldn’t know what else I’d be doing, if I wasn’t here.”

And as far as her favorite part of her job, Gainey says it will probably surprise most. “Everybody hates to make salads, but I love making them. I do love to decorate, too, but I love the time to myself when I’m putting together salads.”

Getting to know each other like family also includes who is a morning person and who is not. Gainey says some people you don’t talk to first thing, and you know that. “You need to give them a little time, and you know who they are, you say ‘morning’ and go on, you let them get woke up. Give them an hour or two and it’s all good …”

But Gainey says she’s pretty much always in the same mood, “from the time I get up to the time I go to bed,” which could be as early as 2 p.m. or as late as midnight, just depending on how her sleep schedule is running.

“I may have another round of coffee at 7, 7:30 in the morning if I get really tired. Then I drink a little bit, and I’m ready to go at it again.”