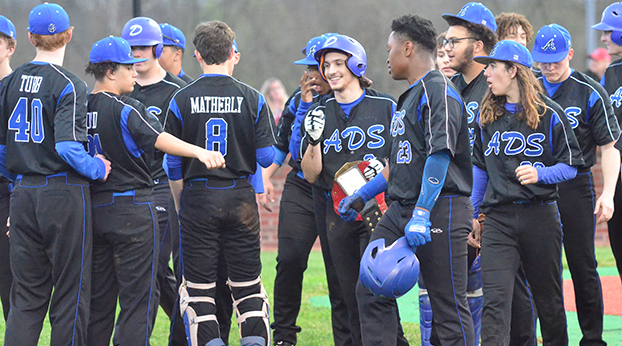 One month into the season that follows its best season ever, the Danville baseball team is once again among the state’s best teams, and the Admirals are again positioning themselves to compete for a state championship.

Just like last year, when the Admirals went 40-4 and reached the semifinals of the state tournament, their pitchers are mowing down opponents, their hitters are swinging for the fences and their dreams are as big as they get. 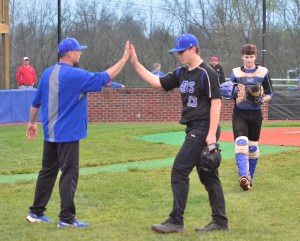 “We live for this,” Danville senior Brady Baxter said. “We have a good team this year, and I feel like we can get back to that.”

Danville is off to a flying start. The Admirals improved to 12-3 with a 9-0 victory over Lincoln County in their 45th District opener Wednesday at Admiral Field.

“We’re playing pretty good. But it’s probably a different team than I’ve ever had before,” Danville coach Paul Morse said.

Nine of the team’s 23 players are seniors, including six who have been playing — and in many cases starting — since they were freshmen.

“We’ve got a lot of experience and some really good players in that group,” Morse said. “And the other three guys that are starting are really inexperienced. They haven’t played a lot of varsity, haven’t played a whole lot of baseball in their lives.”

The inexperience is clustered in the outfield, where Morse has used eight different players so far.

“We’re hoping to try to find a little bit of consistency and trying to find that lineup that we really like,” he said.

There is a lot to like about Danville, starting with a pitching staff that lost two Division I-caliber arms to graduation but still has four pitchers who have committed to Division I colleges: seniors Brady Baxter (Marshall), Brady Morse (Bellarmine) and Logan Smothers (Eastern Kentucky) and junior Sam Matherly (Bellarmine).

“If everybody’s healthy, pitching-wise I feel we’re as good as we were last year,” Paul Morse said. “We might not have quite as much depth, but we’ve got four or five pretty good ones.”

Danville also boasts a sound infield defense led by some of the team’s most experienced players.

Baxter and Brady Morse combined to pitch a one-hitter Wednesday as the Admirals won in their first game after a five-day layoff following a spring break trip to Panama City Beach, Fla., in which they went 2-1.

The Admirals are ranked sixth in the current statewide coaches’ poll after opening the season at No. 2. Their three losses — including a loss at No. 1 Trinity — have been by a total of four runs, and they have held opponents to one run or less in eight of their 12 wins.

They’re also once again one of the most powerful teams at the plate as well. The Admirals lead the state with 19 home runs in 15 games and are among the top 10 teams in RBIs and batting average. 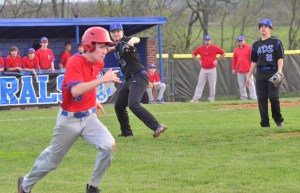 Three players — Brady Morse, Smothers, and K.J. Stanfield — are among the top 20 in the state in home runs. Preston Barnes became the ninth different Danville player to go deep this season when he hit a grand slam in the sixth inning Wednesday.

“We’ve got some power in the lineup,” Paul Morse said.

The Admirals have the power to put teams away, but they said they didn’t play their best Wednesday, when they had only five hits in the opener of a two-game series that concluded Thursday at Lincoln.

Baxter said they need to make sure they approach every game the way they look forward to games against defending state champion Trinity, which defeated them 7-5 on March 21, and the other top teams on their schedule.

Danville has a source of motivation that few of their opponents can claim, having come so close to the brass ring last year. The 2021 Admirals won more games than all but two teams in state history, including 18 straight before McCracken County ended their season one game short of the state finals.

“That game hurt me. I wanted a shot at Trinity (in the title game),” Baxter said. “I cried after that game last year. I felt bad for the seniors last year. But it helps this year. We saw those seniors not get what they want, so the seniors we have now are more fired up and ready to play.”

Paul Morse said the Admirals will benefit from swallowing that bitter pill.

“That experience goes a long way,” the Danville coach said. “Even those guys that we say are inexperienced, they were here and went through all that, so they understand what that takes.”

Baxter agreed with that.

The veterans, meanwhile, welcome the expectation of success. Paul Morse said he doesn’t think the No. 2 preseason ranking put any extra pressure on his team.

“A lot of those guys were pissed they weren’t No. 1,” he laughed and said. “And that’s the kind of guys you want. You want that kind of competitive drive. We talk about that all the time: Just compete. … When you step on the field, no matter what position you are, you have to believe you’re the best.”