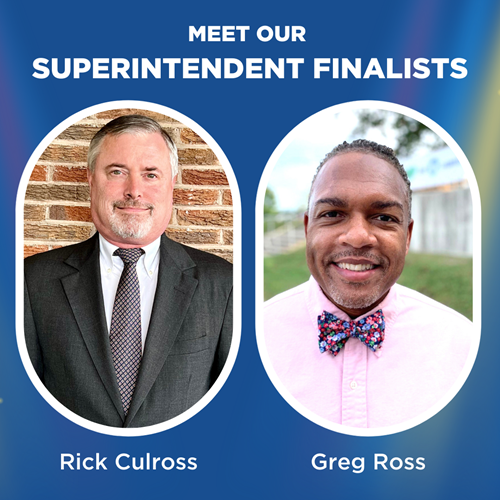 Board Chair Steve Becker, who was the board representative on the screening committee, said the committee was dedicated to bringing the best possible recommendations to the board.

“I totally appreciate the hours of work those folks put in,” Becker said. “The quality of the applicants presented to the board was absolutely outstanding.”

How do you plan to rebuild the trust and unity within the district, with staff, students, and the community?

Why do you want to serve as the leader of Danville students, their families, staff members, Danville alumni, and the community?

How in your leadership have you worked to improve diversity, equity, and inclusion?

Meet the finalists below!

Rick Culross has lots of experience working with students, teachers, families and community members. Currently, he is Deputy Superintendent of Support Operations for the Montgomery County School District. He oversees day-to-day operations, monitors directors and departments for all support services in the district and works closely with the superintendent in all major decisions in his role.

Culross wants to be Superintendent of the Danville Independent School District because he describes the school community to have untapped growth potential for success. He has spent a considerable amount of time in Danville, where he shops, worships and spends time with his family.

He has worked with student services, finance, personnel and school operations, providing a well-rounded skill set. He said all decisions a school district makes should focus on what is best for students, and they rely on regular review of data sources and fiscal resources.

Culross has experience working with special education populations, a variety of cultures and ethnicities and a diverse socioeconomic population. His time with student services has taught him about individual student, family and community support and needs.

He admires the strength and pride of the DISD and wants to create new, lasting sources of pride and build partnerships within the community, particularly those that will help students become career and college ready.

Greg Ross has been involved in helping minority superintendents prepare for their roles and has helped guide and has partnered with superintendents across the state. He has been looking forward to serving in a superintendent role himself and feels that Danville is a place he could call home.

He is currently a Principal for Fayette County Public Schools. His prior roles include Director of the Division of Next Generation Professionals for the Kentucky Department of Education, Principal for Paducah Independent Schools, Teacher for Jefferson County Public Schools and Paducah Independent Schools and Athletic Director/Basketball Coach/Classroom Teacher at Christian Fellowship School.

Ross is looking for a home, not a “stair step.” He wants to listen to Danville as a whole and make instructional and athletic decisions he would want for his own child and build corporate and business relationships to advance the community.

Some of his accomplishments include being recognized for state assessment scores, growing a school with over 90% minority and 90% poverty to proficiency; being awarded by KDE for leadership, commitment to service and equity; and creating what is considered one of the best after-school programs in the multi-state region.

To listen to the interviews, click the link below.