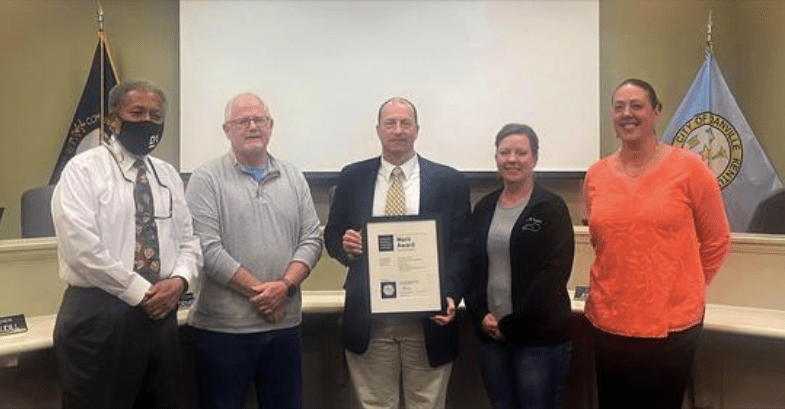 Commissioners and Coffey with the award

The City of Danville, along with their design consultant, Gresham Smith, received a merit award for the Downtown Master Plan at the American Society of Landscape Architects conference on April 1.

Mayor Mike Perros, City Engineer Josh Morgan, and others from Gresham Smith accepted the award, which is in the category of Planning and Analysis.

“I am proud of our very talented team for their commitment to using landscape architecture, design and planning to connect people and spaces – reimagining sites to create a real sense of place,” Land Planning Executive Vice President Jessica Lucyshyn said in a news release on the Gresham Smith website.

Morgan said Danville was the smallest city given an award for design, with the others being Frankfort, Lexington and Louisville.

“There were a lot of design awards, not construction awards, handed out, and what they told me is that [design] is the easy part; the hard part is actually making things happen, so that’s our challenge now,” Morgan said.

The city has plans to start construction on Main Street this summer as part of the master plan.

“We’re off to a good start,” Commissioner Denise Terry said.

Morgan presented the results of the city’s aquatic center survey. Danville sought community input about what people wanted for a new aquatic center as part of their Parks Master Plan.

The five features/amenities people most wanted are outdoor and indoor pools, concessions, slides, and locker rooms. 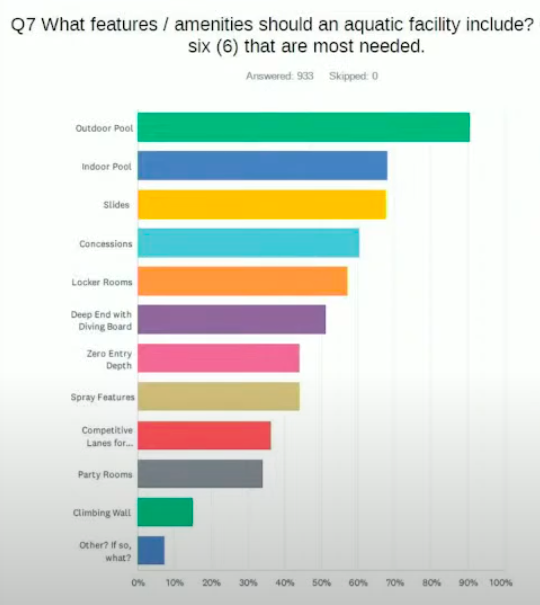 Respondents rated cost as the most important consideration in the project. In response to the question of how to fund it, most people said a combination of ways, and user fees.

The commission approved funding to put shade structures over the bleachers at the softball fields. The total cost for material, installation, and delivery is $109,360.

Morgan said the softball fields have had shade issues, so they met with Bluegrass Recreation and got the quotes for eight shade structures to go over each of the bleachers at all four fields.

City Manager Earl Coffey said that price is consistent with prices they found six years ago, when the downtown master plan was being made. The shade structures would have fabric on top that’s removable, so workers can take the fabric off in the winter to protect it.

The commission plans to have public meetings about updating the city’s comprehensive plan. They will collaborate with the fiscal court, Junction City and Perryville to make changes that would apply to the whole county.

Public meetings for the community will include refresher education about what the comprehensive plan is. Community members will be able to give input in the collaborative process for change.

The commission discussed changing the noise ordinance for outdoor music. Commissioners said businesses want the option to play music and TVs outside especially as the weather warms up. Coffey said they will likely hire a consultant as the process would require considerations to other city projects.

• Approved a budget increase of $7,629 for the new central fire station. The original contract did not include demolition of the streetscape area for moving a gas line; the increase accounts for it. It also adds 35 additional days to the construction contract, to account for weather and Covid delays. The fire station has a substantial completion date of May 26.

• Passed the first reading of Ordinance #1991 to amend the city’s guidelines for erosion and sediment control. The ordinance accounts for changes to the state’s stormwater permit. Danville’s stormwater manual was last changed in 2005, and they will be putting the manual in ordinance form, which is a requirement of the permit.

• Passed the first reading of Ordinance #1992 for post-construction stormwater. This new ordinance changes how the city implements elements of design when developers present final construction designs, and how they’ll handle stormwater runoff. Morgan said they made changes to make things that were vague more enforceable.