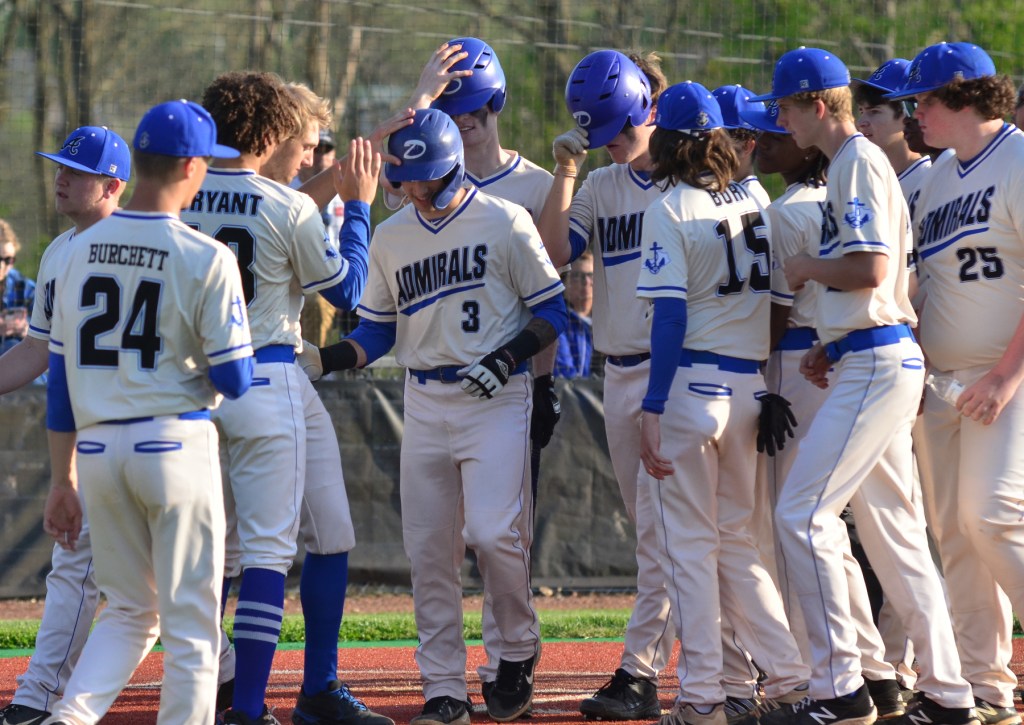 Preston Barnes (3) is congratulated by Danville teammates at home plate following his two-run home run during the third inning Wednesday.

When the Admirals return to the All “A” Classic baseball tournament this weekend for the first time in eight years, they’ll find themselves surrounded by some of the state’s best teams.

They will be one of the favorites, but also just one part of a stacked field for the statewide small-school tournament.

“There’s a lot of really good teams,” Danville coach Paul Morse said. “It’s a gauntlet to get through it.”

The eight-team field for the tournament Saturday and Sunday in Richmond features three teams ranked among the top 12 in the current coaches’ poll. A fourth, defending All “A” champion Owensboro Catholic, which was ranked No. 3 last week, was upset in its sectional game last weekend.

Morse said the All “A” challenge actually began for Danville last Saturday when it defeated No. 15 Sayre 14-3 in five innings in its sectional game.

“There’s almost no way that the overall state (tournament) could be a harder gauntlet to go through than the All “A,” Morse said. “I don’t think you’d have to go through four top-15 teams ranked in the state to win it all.” 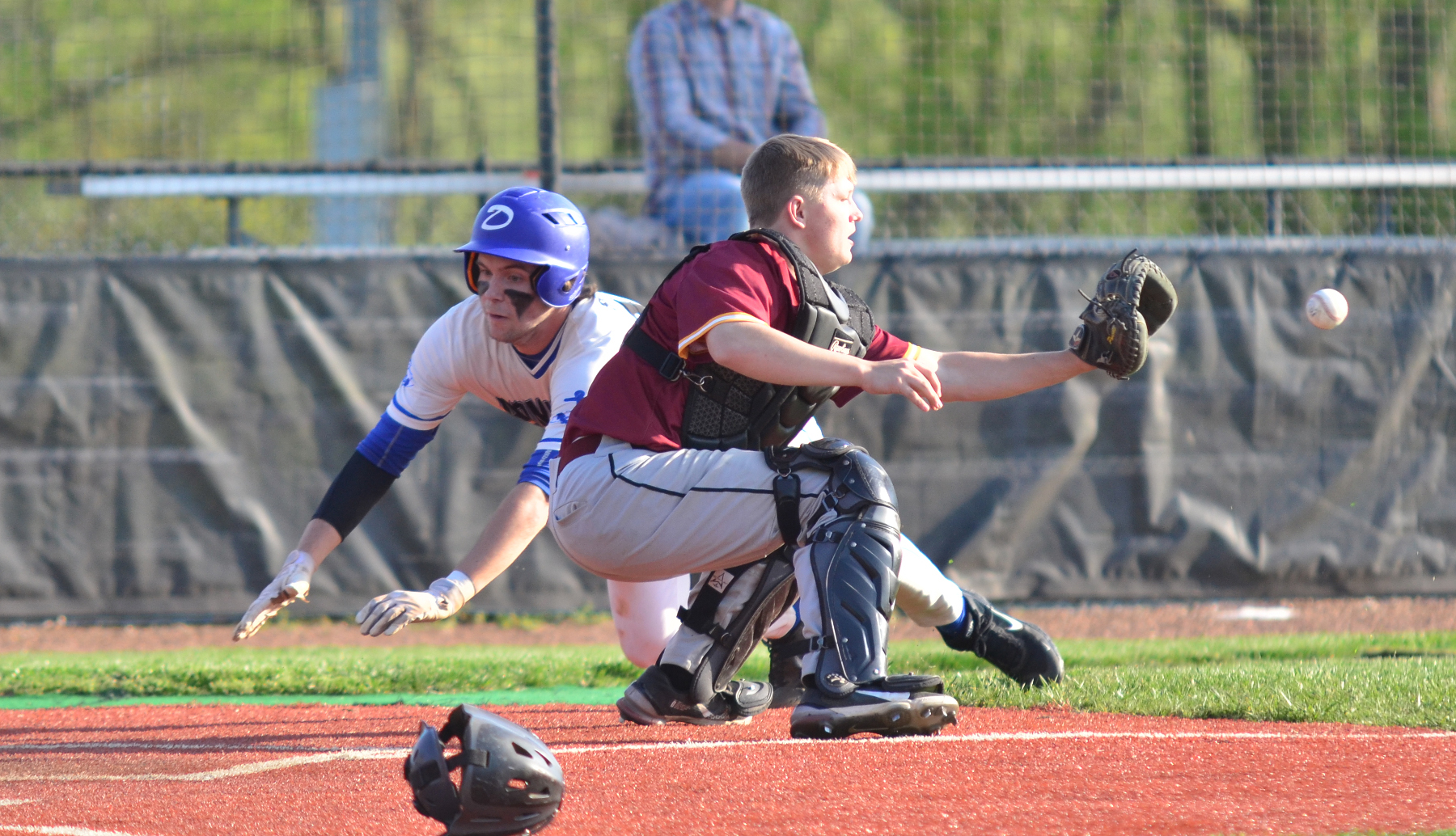 Logan Smothers, left, of Danville lunges toward home plate before Garrard County catcher James Parsons can receive the throw to score a run as part of a double-steal during the second inning Wednesday.

The field also includes Hazard and Pikeville, two of the top teams in eastern Kentucky; Glasgow, which knocked off Owensboro Catholic; and Walton-Verona, last year’s runner-up.

Danville will play Campbellsville (13-10), which was ranked earlier this season after winning its first nine games, in a quarterfinal at 5:30 p.m. Saturday at Eastern Kentucky University’s Earle Combs Field.

A win would pit the Admirals against Walton-Verona or Beechwood in a Sunday morning semifinal, and the championship would follow Sunday afternoon.

If rain doesn’t wreck the schedule, Danville would have to win three games in about 22 hours to take the All “A” title for the first time. The compact schedule plays to the Admirals’ strength, which is pitching depth.

The Admirals haven’t made it past the All “A” sectional round since 2014. They have made three appearances in the state tournament since it was established in 2004, and they made the finals in consecutive years in 2013 and ’14.

They are coming into this year’s tournament on a roll, with wins in eight of nine games preceding a Thursday night game at Wayne County.

They defeated Garrard County 12-0 on Tuesday and 9-0 on Wednesday to conclude their 45th District schedule with a 5-1 record, and they secured the top seed for next month’s district tournament on a tiebreaker.

“We wanted to get that No. 1 seed, and the district tournament’s here at our place this year … so it makes it better for that,” Morse said. “It’s a little difficult with (district games) and the All ‘A’ going on at the same time.”

Morse said he didn’t think Danville played particularly well in its two wins over Garrard, and he said his players may have been looking ahead.

“You look at the scores and you think, ‘You must have done well,’” Morse said. “We played OK. Mentally, we were not too excited about playing the last two days. That was a little disappointing.

“But our pitching was great the last two days … and you can’t be too upset about scoring 21 runs in two days.”

Brady Morse and Preston Barnes teamed up for a three-hit shutout Wednesday, with Morse allowing two hits and striking out eight over five innings and Barnes allowing one hit with two strikeouts in two innings.

Barnes went 5 for 5 with two doubles on Tuesday, and Brady Baxter was 3 for 4 on Wednesday. Baxter homered in each game after hitting three homers in the win over Sayre, giving him a team-high eight home runs.

Now it’s on to the All “A” and the chance to do something no Danville team has done before.

“We had a really good team last year, and this is something they didn’t get to do,” Morse said.

Morse said the All “A” is a priority for the program.

“It’s big. It’s so big that I feel in years past we’ve lost district games to make a run at it,” he said. “You’re always making plans for the All ‘A,’ and we want to give ourselves the best chance to be prepared for this weekend. We want to go there and win it, no ifs, ands or buts.”

The tournament is being played at EKU for the first time, and Morse said playing on a collegiate field with a synthetic surface will help the Admirals if they are able to return to the state tournament, which will be played on the University of Kentucky’s turf field.

“However it plays out, it’ll be a great experience for our guys and help us prepare for the end of the year and the postseason,” he said.