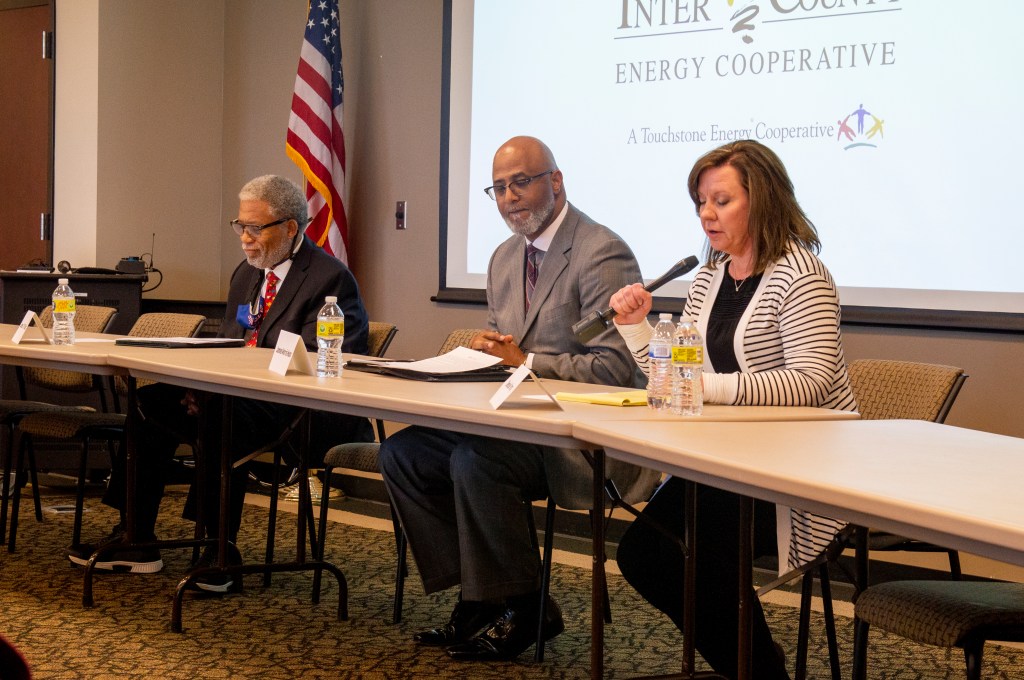 All candidates answered questions about five topics from the Danville-Boyle County Chamber of Commerce. The topics were workforce development, taxes, housing, downtown development, and tourism.

The three mayoral candidates are James “JH” Atkins, James Hunn, and Denise Terry. The primary election on May 17 will eliminate one of the three candidates from the general election.

Atkins is a long-time educator, veteran, and a current city commissioner who is serving his 12th year in the role. He has served in the Army, and as a teacher, principal, coach and assistant superintendent throughout his career; and as diversity administrator at Centre College.

“I serve as a public servant, not as a politician,” Atkins said. “I will continue to bring to our non-partisan commission a willingness to listen, to hear, and to serve all the citizens of our community.”

Hunn currently directs re-entry programs for inmates at the Boyle County Detention Center. Before that, he served for 27 years in the U.S. Air Force, including as an advisor to intelligence. He is a Danville native.

“My heart has always been to serve; I love my community,” Hunn said. “I truly believe that we need a leadership that will lead with integrity, passion, service, and community.”

Terry is serving her 8th year on the city commission, and is a Danville native. She has been a realtor, small business owner, volunteer, and lifelong Danville resident.

“In my tenure, I have displayed leadership skills needed to move this community forward,” Terry said. “I’m an out-of-the-box thinker, a visionary, a progressive, I have a strong work ethic, I’m a high achiever, and open-minded.”

• Question 1 on housing: “Based on census bureau data, Boyle Co has a population of 30,244 people. However, our “daytime population” increases to 32,403 as out-of-county employees commute to  Boyle Co for work. The median household income in Boyle Co is $51,366. There are  approximately 1000+ job openings currently in Boyle Co. Housing affordability and availability have become a growing concern and lack of housing has been suggested as one of the reasons our employers are having a difficult time filling open positions. Based on this data, it appears we have a need and opportunity. Do you believe the city government should incentivize developers/builders in some way so as to offset the high cost of land development and construction to encourage the building of more affordable housing? If so, what are your thoughts on how that could be accomplished.”

Atkins said he would call it workforce development housing instead of affordable housing, because the housing needs to accommodate the workforce. He said it takes an effort of the entire community, not just the government, to provide necessary housing.

“My goal would be to organize a housing summit to find out what is really needed in this community for workforce development housing,” Atkins said. “…This mayor will ensure we bring those in need to the discussion, and also include them in part of the decision-making process.”

Hunn said he believes the city should incentivize development builders; possibly in reduction of waivers or fees, reduced infrastructure, or other ways.

“If we’re looking at workforce development, of course there’s neighbors that might not like that development, or there’s concerns about it, but I truly believe that if we sit down together as a community and look at this- this is a great need, so how in the world are we going to have new people come into our community that can afford housing?” Hunn said. “…I believe the city should be involved in incentivizing developers.”

Terry said she believes the city should incentivize developers in some way, but highlighted the importance of jobs in the housing discussion.

“You can’t afford housing on minimum wage,” Terry said. “…The way we can [incentivize] is we partner through our newly formed Economic Development Authority with local banks and other businesses to figure out creative funding- because the way we can incentivize developers and builders is to bridge the [income] gap.”

Hunn said he believes one of the greatest opportunities to develop the pipeline for employers is within the recovery community.

“We have over 600,000 individuals that are returning from our prisons and our jails each year, and they are completing programs to make them productive citizens,” Hunn said. “Men and women who have sacrificed their lives, staying sober, doing the right thing, completing programs, and we have invested in these programs … We as a community, as a whole, have the opportunity to say these men and women are qualified to do their job.”

Terry explained that jobs in the area have not adjusted to fit the younger generations’ wants and needs.

“We have not adjusted our jobs to accommodate the workforce; our millennials are almost 30 years old, and we talk about them like they’re unicorns,” Terry said. “They are not going to stand on an assembly line and put a part together for 30 years … they’re going to jump around … they’re just a different generation and we have not prepared for that.”

She also said the schools need to partner with BCTC to have students start their college degrees in high school.

Atkins agreed about the need to partner more with BCTC, and said they should have schools send both local and area students to BCTC.

“I would suggest we give it some time, graduate a few classes, then reassess our government and benefactor employment leads, and begin to work on improving relationships between our economic development organizations,” Atkins said.

He also agreed about the need for employers to hire more recovered convicts.

• Question 3 on taxes: “Between the relatively new income tax increases enacted by the City of Danville to  1.9% and most recently Boyle County to 1.25%, Danville’s workforce is now tax burdened at over 3% of their salaries. Added to that the 5% flat state income tax, it means that workers in Danville, Kentucky are taxed at a higher rate than most comparable communities. This tax burden can have a negative impact on attracting both workers and employers. Do you feel our local income taxes in Danville are unduly high? If so, what relief do you feel the taxing entities involved could offer our workforce?”

“When we talk about taxes, we need to think about what services we’re receiving for those taxes,” Terry said. “I actually have many people tell me that they like their services and they don’t mind paying the taxes because we have excellent services.”

She continued, “I think we’re pretty much on-par with everyone else and I don’t think our [taxes] are necessarily higher, it’s just a balancing act of where you get your revenue.”

Atkins said he has voted both for and against tax increases in his time as commissioner. He said people understand taxes are necessary for a high quality of life in the city.

“My last vote in support of the insurance premium increase was a vote to provide increased salaries for all city employees, especially our first responders, police and firefighters,” Atkins said. “Phase one of this plan has generated some excellent results. Retention is up, recruitment has become rather easy, and we have become very competitive with our competition.”

He continued, “Being a leader you must remember, being heavily encouraged to make tough decisions, especially those that improve quality of life.”

Hunn said that yes, he believes the local tax is too high.

“Coming back to the commonwealth of Kentucky, I was kind of stunned by how many taxes I have to pay, and I don’t mind paying my taxes … But what can we do to help reduce those taxes?” Hunn said.

He said he understands services are needed; but brought up the idea that if Danville can pay for new buildings and downtown development, they should try to give back to the citizens when those projects are complete.

“I truly believe that taxes are too high in my opinion,” Hunn said. “What can we do to continue to maintain services … but what can we do to give some of that back to the citizens?”

• In response to the question of whether they support the current downtown development plans, all candidates said they are in support of the plan’s pedestrian-friendly aspects.

• In response to the question, “If Danville were to be eligible to also enact a local restaurant tax that would benefit tourism efforts in town, is that something you would support?” candidates provided arguments for and against it, but said they would likely need to gather more information before taking a stance.

Videos of several parts of the candidate forum can be viewed on CKYTV’s Facebook page.

See the next issue for an article about commissioner candidates’ views on these topics.

Yo-Yo Ma performs in front of sellout crowd at…