The questions asked by the Danville-Boyle County Chamber of Commerce included the topics of housing, taxes, economic development, downtown development, and tourism.

The primary election on May 17 will eliminate one of the nine candidates from the general election.

Due to the number of candidates and questions, this article will only focus on the issues of housing and taxes. For commissioner’s views on the topics of economic development, downtown development, and questions from the audience, see a video of part of the candidate forum on CKYTV’s Facebook page. 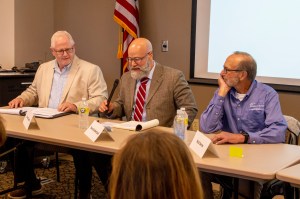 “I’m here because I love Danville, this is my job, Danville is my focus, it’s where I chose to raise my kids,” he said.

In response to the issue of providing more affordable housing, and the question of whether the city should give incentives to builders: Caudill said one idea is to provide funds to help builders up front, but if the development doesn’t pan out, they could recollect the funds.

“I know that when we offer incentives for industry, that typically we have a claw-back involved where things don’t work out like they thought, the taxpayer gets their money back,” Caudill said.

He said the Economic Development Authority (EDA) should be heavily involved in the housing discussion, as houses are needed to increase economic activity.

When asked if he believes the local tax of 1.9% in Danville is too high, Caudill said it’s hard to compare Danville’s taxes to other communities because of how much Danville has to offer.

He said he did not vote for the previous tax increase in 2017, but explained that the city needs that revenue to maintain quality of life.

Southerland has lived in the area his whole life and lived in Danville since 2006. He has owned a restaurant in town, has rehabilitated houses in town, and his wife owns Wilderness Yoga Shala.

In responding to the housing question, Southerland said he definitely sees a need for more housing, and that the city should work with the EDA to address it.

“I think we need houses of all different price points,” he said. “I think the EDA needs to look at buying some property, setting up the infrastructure, and working with developers to build some subdivisions around Danville.”

On the topic of taxes, Southerland emphasized the need for services, but said they should make sure taxes don’t increase more.

“I do believe Danville’s cost of living is relatively low nationally, but probably a bit high locally,” he said. “A tax break would be nice, but at what cost would that be?”

He said economic growth and tourism would help alleviate the tax burden, as more people would be paying taxes in the city.

Serres is a former city commissioner and president of Bluegrass Biomedical, Inc. He has coached cross country at Centre College and Danville High School, and is on the Parks and Recreation board.

To address affordable housing, Serres suggested the city look into Tax Increment Financing (TIF), which is a method of encouraging development by giving developers tax breaks until they can self-sustain, or utilizing future tax revenues to pay for improvements.

“There’s a lot of small businesses that would like to be here, but the rent is very high, so maybe that ‘TIF’ kind of model can work for new businesses as well,” Serres said.

Regarding taxes, Serres said the city needs services, especially to make sure police, fire, and other departments are paid well.

“Quality of life is good and it hasn’t discouraged people from moving here, despite the taxes,” he said.

However, he also believes that citizens should not be tax-burdened, and emphasized the need to strike a balance. 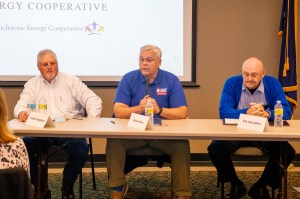 A Danville resident of 60 years, Singleton’s family has a history in the town. His grandfather came to the town in 1899, and his father was the first blind man in Kentucky to hold a real estate license. Singleton has previously run for city commission.

Singleton said Danville’s budget is likely not big enough to reserve any real incentive programs for developers with cash or tax rebates. He said people from out of state are coming to Kentucky to buy homes and rent them out.

In response to the tax question, Singleton said that sometimes, citizens complain about taxes but are not willing to live without the services they provide. “Think about everything that we need,” he said.

He continued, “I think as a team, we can figure something out to make taxes a little better for Danville.”

Moore has served as director of the Planning and Zoning Commission in Harrodsburg/Mercer County since 2005. A 50-year Danville resident, he has also run a small business in Danville, served in the Navy, and led continuing education classes for the Kentucky League of Cities to teach city officials how to be better in their positions.

Moore believes that the housing market may change dramatically in the near future to a possible housing recession.

“In the last two years since Covid came about, we’ve seen home prices almost double; we’ve seen lumber prices close to triple, and I don’t know if affordable housing, if we’re going to use that term, is even possible right now,” he said.

He said he doesn’t know what incentives should be, but the answer may change if the economy changes and house prices fall.

Moore explained that taxes are a necessary “evil” to provide services, but believes the city can find doable ways to reduce the budget.

“I spent about three hours going through the budget that’s on the city’s website; it’s 42 pages long, it’s over $25 million, and I find it hard to believe that we can’t go in there and find excess savings that we can shave out of that budget without having to raise taxes,” he said.

Lamkin is a 41-year veteran; he served in various positions for the U.S. Army, including as a colonel. He has also been a realtor.

After recently sitting in on and learning from a meeting with mortgage companies and bankers, Lamkin said, “A month ago, interest rates were barely over 3%; they went to 5.5% last week. We were told in that meeting that interest rates would exceed 9% in the next five years. If that happens, you’re going to see a lot of foreclosures, you’re going to see a lot of bankruptcies, because houses sold for way more than what they should have brought.”

Lamkin said he foresees a major house fall in the near future, and doesn’t know what the city should do about affordable housing in the meantime.

Lamkin said he believes taxes in the city are too high and they need to lower them. He said they should work with Frankfort to lower payroll tax.

“Frankfort needs to work with every county in this state to lower that tax, and make it a flat tax,” he said. “It would help lower the taxes of everyone in this state, especially the citizens of Boyle County.” 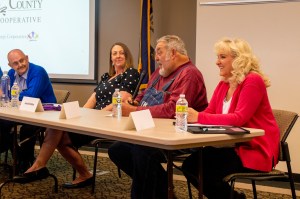 Hollon is a current city commissioner, owns a health food store in Danville and has lived in the town since 1991.

“It’s been exciting working together with so many wonderful citizens that give so much, and I just want to give back,” Hollon said.

In response to the housing question, Hollon said one idea is to form a taskforce with realtors, builders and the government about what they need, but not give taxpayer money away. She explained that the most affordable houses for the workforce right now are $200,000 with two people working.

“It’s a big problem, it’ll keep going, but also, we don’t need to flat deny housing projects, which has recently happened,” she said. “The city and Planning and Zoning need to get on the same page, we need to fix things, we need to work on our comprehensive plan.”

Hollon explained that the threshold of 3% local tax makes it hard to attract businesses, and she believes they’re too high. She said the previous tax increase in 2017, before her time on the commission, was to pay for needs like utilities.

“Anytime we say we’re going to spend, I think we need to talk about how we’re going to save … really finding more efficient ways to do things,” she said, explaining that the city was able to decrease the cost of the new fire station from $8 million to $6 million through efficiency of funding.

Robinson is a long-time resident of Danville and has two kids who graduated from Danville High School.

“I’m going to listen to everybody’s problems and try to solve them,” Robinson said. “I work for the people; nobody’s going to work no harder or try no harder.”

“I don’t think the [housing fall] is happening yet; it depends on a lot of things happening this fall,” he said. “I wish and pray for the best for this country and its people, because I’m one of them.”

Robinson said, on the taxing issue, that the city could re-evaluate its practices on everything like garbage pickup, water, and other things in the budget, to save money and lower taxes.

Peek, a lifelong Danville resident, worked for 30 years for the City of Danville as human resources director and city clerk.

She said that Danville should look at how other communities have made housing more affordable, and bring their ideas back to the city.

“I think you have to meet with people, and maybe you could waive fees, I’m not sure, you would have to look into it,” Peek said.

Peek said she doesn’t believe that taxes are unduly high in Danville, and that the taxes go toward important services that give high quality of life.

“The citizens here want quality; how do you pay for that?” she asked. “There’s only so many forms of revenue for the city that they’re allowed to do.”

Buster Pike bridge to be rebuilt