Wheeler ‘back for more,’ eager for second season with Wildcats 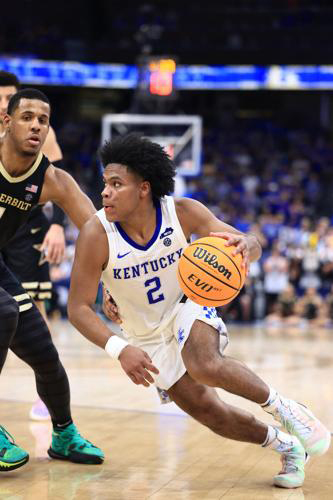 Sahvir Wheeler had a dozen assists in Kentucky's win over Vanderbilt. (Photo by Jeff Houchens)

Sahvir Wheeler kept it simple when the Kentucky guard announced he would be coming back for a second season with the Wildcats.

“Back for more,” Wheeler said on social media post. “Since everyone (was) thinking the last post was a returning announcement (on Instagram), here’s your official one: I’m back, watch yours.”

Wheeler was Kentucky’s starting point guard last season and started in 29 of the team’s 30 games. His return is no surprise and Wildcats coach John Calipari also will welcome back National Player of the Year Oscar Tshiebwe. Lance Ware, CJ Fredrick and Jacob Toppin are players the Kentucky coach expects to return next season.

“We have our freshmen, our returning players. I feel really good about what it is, especially like you said, you have a building block with Oscar (Tshiebwe),” Calipari said on a radio program last week. “Let me say this: Most of this stuff is a small group but they were on Sahvir because of that last game. Do you remember Sahvir against North Carolina? And against Kansas, how he played? He had a (heck) of a year until he got injured and then he gained some weight, he didn’t play as well, but he’s still that guy. And I told him, If I can get you right and get you steady in who you are and keep improving,’ because he’s improved, I said, ‘You’re the difference in this stuff.’ But people have forgot about CJ (Fredrick).”

Calipari referred to Wheeler as the player that “stirred the drink” for Kentucky. He averaged 10.1 points per fame and 6.9 assists per outing, tops in the Southeastern Conference.

Bryce Hopkins found his new home and will be transferring to Providence. He posted “Friar Forever” on his Twitter account on Monday afternoon. Hopkins is the second former Kentucky player to announce his new program in the last two weeks. Former Kentucky Mr. Basketball Dontaie Allen transferred to Western Kentucky after entering the transfer portal.

Flint a candidate at Fordham

Kentucky assistant coach Bruiser Flint is a candidate for the opening at Fordham. Former Rams coach Kyle Neptune left to take over for Jay Wright at Villanova.