Admirals eliminated at All “A” Tournament 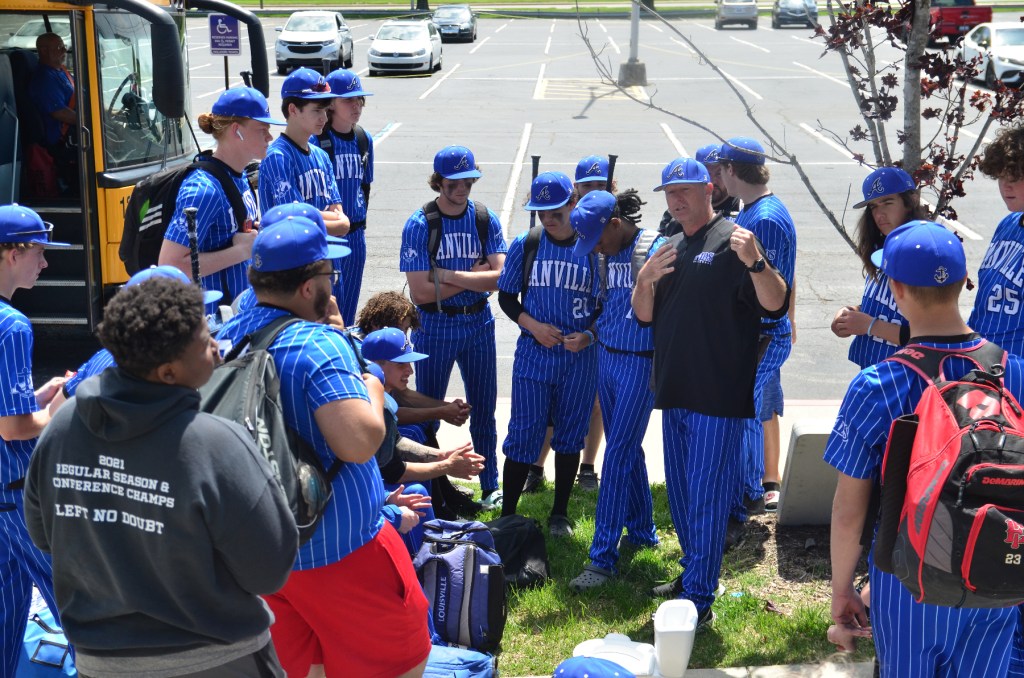 Danville coach Paul Morse talks to his players outside Earle Combs Stadium on Sunday following the Admirals’ 2-1 loss to Beechwood in an All “A” Classic semifinal. Photo by Mike Marsee.

Danville didn’t get what it came for, but the Admirals’ coach believes they can still take something of value from the All “A” Classic.

Coach Paul Morse said the sting of defeat in a tournament the Admirals had a chance to win could serve them well in the postseason, as could the experience gained by players who hadn’t been in a similar situation before.

Danville was considered one of the teams to beat in the statewide small-school tournament, but so was Beechwood, which eliminated the Admirals with a 2-1 win in the semifinals Sunday at Earle Combs Stadium.

“It definitely hurts, especially for your seniors,” Morse said. “That’s a goal that they’ve had, not just this year but for several years. So it’s tough, but it was a good game against a really good team and a really good pitcher.”

It was no less than a battle between two of the best teams in the state, with two future Division I pitchers on the mound, as No. 7 Beechwood prevailed over No. 5 Danville in a rematch of a 2021 state tournament game that the Admirals won.

The shoe was on the other foot Sunday, with the difference being that this loss didn’t end Danville’s season. There are two weeks remaining in the regular season, after which the Admirals (19-5) will take another swing at a state championship.

“It doesn’t feel good. It hurts, but you’ve got only two weeks before that could be, ‘no game tomorrow,’” Morse said. “One thing about the All ‘A’ is you get to experience that during the year before the playoff run.”

Danville is an experienced team, but there are a few players on the field who are new to everyday roles this season.

“I think they grew up today,” he said. “I think that’s a great plus for us going forward, that some of these young guys really saw what they have to do to compete in an elimination playoff game.” 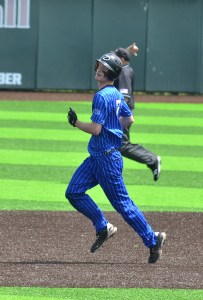 Jack Simpson of Danville reacts after his fly ball was caught by Beechwood center fielder Cameron Boyd for the final out Sunday in the Admirals’ 2-1 loss in an All “A” Classic semifinal. Photo by Mike Marsee

Berger gave up a run in the top of the first inning and Baxter gave up two in the bottom of that inning, but the two combined to strike out 15 batters and allow only three hits over the final six innings.

“After the first inning they both settled down and got in a groove and were rolling,” Morse said.

Baxter drove in Danville’s lone run, as his one-out single plated Jarius Bryant, who led off the game with a walk.

The Admirals got only one more hit, a fourth-inning single by Baxter. They continued to put balls in play, but they hit into two double plays and had three line drive outs in the outfield.

Danville was alive right up to the final out, when Beechwood’s Cameron Boyd made an impressive catch on a ball hit by Jack Simpson to deep center field.

Boyd led off the Beechwood first inning with a home run, and the Tigers (20-2) used two more hits to produce their second run.

Baxter retired 10 straight batters in the second through fifth inning, striking out eight of them. He gave up only one hit after the first inning and finished with 11 strikeouts.

“He tried to establish his fastball, and they were ambushing fastballs (in the first inning),” Morse said. “As soon as he started to prove he could throw his breaking ball for a strike they were dead in the water. It’s the same thing we try to do. We want to jump on them early.”

The night before, Danville posted its highest run total of the season to advance to the semifinals in its first appearance in the statewide All “A” tourney since 2014. The Admirals trailed 6-4 before scoring 13 unanswered runs to defeat Campbellsville 17-6 in the quarterfinals.

They took the lead with a four-run fourth inning that included consecutive RBI doubles by Baxter and Preston Barnes, scored twice more in the sixth thanks to two errors by the Eagles (13-12) and put the game out of reach with seven runs in the seventh inning.

Barnes came on to pitch and got the last two outs in Campbellsville’s five-run third inning and one out in the fourth. Smothers, who is committed to EKU, threw the final 3 2/3 innings on his future home field, allowing only one hit.

Baxter and Brady Morse were named to the all-tournament team.

Paul Morse said the Admirals were far more focused in their two All “A” games than they had been in the days leading up to the tournament.

“Yesterday and today guys were into the game. They were ultra-focused, and that’s what we’ve got to continue to have these last two weeks,” he said.

Danville played at No. 23 Mercer County on Monday night and will visit another of the 12th Region’s top teams, Rockcastle County, on Tuesday before hosting No. 20 Tates Creek, George Rogers Clark and Ryle in its Admiral Classic this weekend.

Morse said he thinks the Admirals’ All “A” experience will make an already hungry team just a bit hungrier as the postseason approaches.

“I think that maybe gives them a little bit more motivation,” he said. “It leaves a little bit of a sour taste in their mouth to know you’re right there on the cusp of a state championship and the ball just didn’t fall your way.”