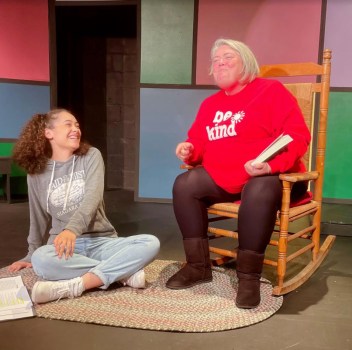 Londyn Jackson asks her Great-Grandmother played by Beth Marlowe a few questions about being a mother with some surprising responses. Photo submitted. 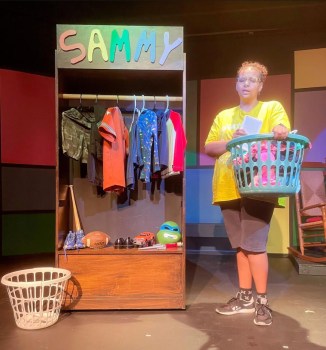 Madison Porter delivers a touching story about the unconditional love of a mother for their child. Photo submitted 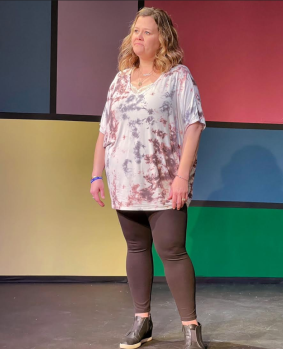 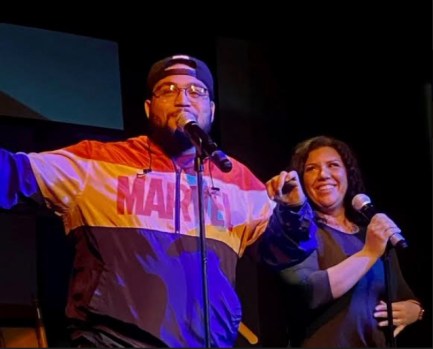 Elliott and Amanda Porter join the West T. Hill family as they perform an original song written and produced by Elli P (Elliott) specifically for this production. Photo submitted.

A play about the many phases of motherhood will kick off the 2022 season next week at West T. Hill Community Theatre, which is at 117 Larrimore Lane.

“Motherhood Out Loud” is a collection of short plays that tells the hilarious, touching and sometimes agonizing story of motherhood, covering many different angles from cradle to grave, according to directors Mary Carol Porter and Jean Crawford.

“We are thrilled to be directing this show during the theatre’s 2022 season,” said Porter. “It is timely after we have celebrated Mother’s Day.”

Stories from 14 playwrights are curated into themed chapters of the play.

“In Fast Births we witness the miracle of life followed by a new mom receiving unwanted sex advice from her own mother,” said Porter. “First Day  introduces us to gay dads, adoption, and a mother coping with her child’s gender identity. Other chapters cover sex talks, step-motherhood, first dates, leaving the nest, marriage, and adulthood.

The directors agreed that production takes all common experiences of motherhood and parenting in general and explores them through insightful monologues and scenes full of comedy, passion, and angst to reach common truths across parenting, generation, and cultures.”

The local community theater produced the show about a decade ago when Karen Logue directed the show. It was performed as readers’ theater with a reading with actors on stools and scripts on music stands.

“I had the privilege of acting in that production,” Porter said. “I’ve always wanted to produce the show again, but as a fully staged production like this one.”

Parenting experiences in today’s society are celebrated, she said.

“We hope the audience will walk away having a greater appreciation of what modern day parents might be dealing with. Parenting is not formally taught, but parents are lifelong learners who continuously grow through unique experiences with their own children. There are no perfect parents, but there are parents who strive everyday to do the very best they can under a myriad of circumstances and challenges.

“No one ever said parenting would be easy, but parents of all kinds desperately want to do their very best each day to make a positive difference in the lives of their children.”

“As directors it was of the greatest importance to us that Jean and I cast a diverse group of talented individuals,” said Porter.

“It was essential that our cast reflect our social world…or community. The more similar our actors are to our community, the more West T. Hill will truly be a ‘community’ theatre for all. We have actors, musicians, and vocalists that are of all ages, genders, and sexual orientation.

“We have a beautiful ‘melting pot’ of different races, ethnicities, religions, as well as actors from unique cultural backgrounds. We feel that we cast this show extraordinarily well.

“The stories and characters have come to life through very unique abilities and stage presence that all of our performers encompass. They are vastly different and beautifully pieced together to create a unique experience for both the audience and the performers. Our hope is to help others understand this ‘brave new world’ that “Motherhood Out Loud” seamlessly brings to life.”

Some of the cast are new to the performing arts or new to the stage. Vocalists are Rinehart, Hensley, Jackson, Williams, Lucas and  Elliott and Amanda Porter, will provide special music related to the theme of the show.

Williams also will entertain with music and singing during intermission.

The 3 p.m. Sunday matinee will have an ASL interpreter for the performance.

The $13 tickets are on sale at http://westthill.net.