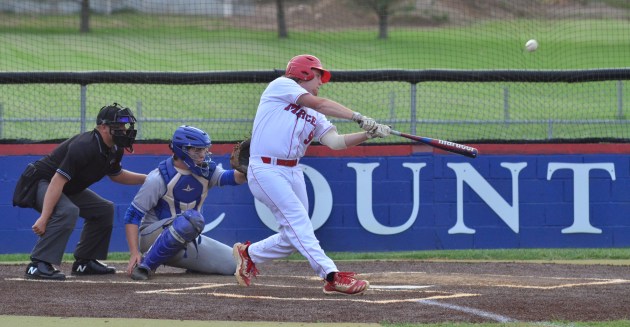 Isaac Beasley of Mercer County makes contact on a swing Monday during the fifth inning of the Titans’ loss to Danville. Photo by Mike Marsee 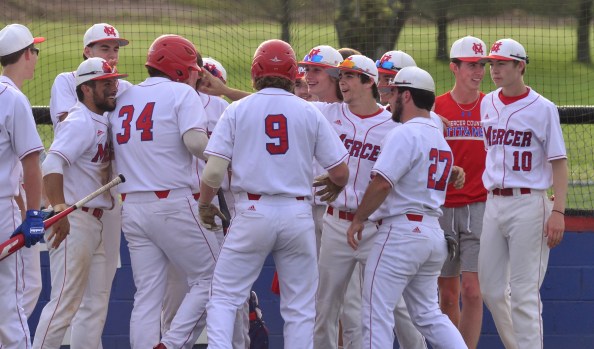 Caleb Purdom (34) is congratulated by Mercer County teammates following his home run Monday during the first inning of the Titans’ loss to Danville. Photo by Mike Marsee 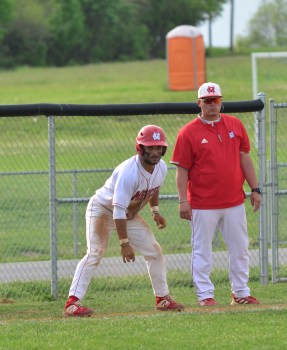 Jackson Peavler, left, of Mercer County takes a lead off third base as Mercer coach Cody Christopher looks on Monday during the first inning of the Titans’ loss to Danville. Photo by Mike Marsee 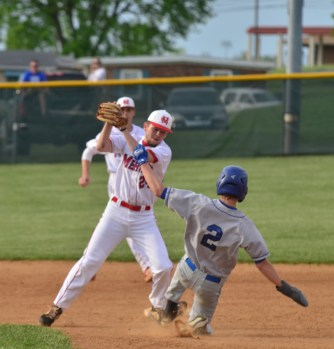 A winning streak to build confidence, a losing streak to instill humility. Both will be useful in the Mercer County baseball team’s preparation to make a run at a regional title.

The Titans carved out a place among the top teams in the 12th Region, cemented their position with an 11-game winning streak, then fell back to earth with back-to-back losses.

And while they said they gained a great deal from their recent run of success, there was also something to be gained once that run ended.

“We were riding high on an 11-game winning streak, and this is the first time we’ve really had to face adversity like this,” Mercer senior Sam Baughman said Monday after the Titans’ streak ended. “We’re coming off a high and now going on a low, so I think that experience alone will help us in the postseason.”

It’s all about the postseason as Mercer navigates the ups and downs of a difficult regular-season schedule.

“I’m a firm believer that you play the entire season to prepare for a single-elimination tournament,” Mercer coach Cody Christopher said.

Mercer was 8-6 before it won 11 consecutive games from April 16-30 and cracked the statewide coaches’ top 25.

“We know our coach puts together a really tough schedule. We’re not afraid to play anybody, and just being able play that comp day in and day out helps us become better players and a better team,” Baughman said. “Winning those games in a row really brought us together as a team.”

During their streak, the Titans defeated a ranked Lexington Catholic team, beat Ballard for the second time this season and completed an undefeated run through its 46th District schedule. Baughman said they improved in all areas of their game over those two weeks.

“Early in the season we were carried by our pitching, but our bats have started to get rolling and we’ve started to find defensive lineups that are working,” he said.

Mercer lost to then No. 5-Danville 11-7 on Monday, then fell to Taylor County, one of the top teams in the 5th Region, 5-1 on Wednesday.

Christopher said win or lose, he likes the direction the Titans are headed.

“We’re going to continue to compete,” he said. “I like where we’re at, and I like my team. I think we’ll be hungry and we’ll be ready for the postseason.”

Mercer is ranked 20th in the state this week, and the Titans took a 19-8 record into their game Thursday with No. 21 Boyle County, another likely regional contender.

The Titans went 28-9 last season against a pretty tough schedule, and Christopher ratcheted up the degree of difficulty this season.

“I want the kids to see everything that they possibly can before postseason, that way they are prepared,” he said. “They’ve seen every type of team, and we’re just going to continue to compete.”

Mercer is led by three strong starting pitchers: junior Evan Hart, a left-hander who committed to Kentucky prior to his sophomore season; senior Cayden Devine, who has returned from a knee injury that forced him to miss last season; and Sam Baughman, a senior who raised his ACT score to 33 after returning for a fifth year.

Baughman said pitching was expected to be a strength for the team this season.

“Our first game of the year we held Ballard to four runs, and the second game Cayden threw a gem against Henry Clay. We’ve just all been super confident and riding off that,” he said. “We’ve had really good outings from our starting pitchers so we haven’t had to go into our bullpen as much. We’ve been able to save arms, and if we can continue that we have a really solid 1-2-3 punch.”

Mercer’s hitting has started to catch up to the pitching in recent weeks, though its team batting average is the lowest among 12th Region teams with winning records.

The Titans are led at the plate by senior Isaac Beasley, an Anderson County transfer who is hitting .325, while senior Caleb Purdom has a team-high four home runs and Baughman and junior Jonathan Logdon have three homers each.

“The offense is continuing to pick up, and we’re going to continue to stay hungry,” Christopher said. “We’ve been working on a good two-strike approach … and we’re starting to see that click and starting to put pressure on defenses.”

Mercer lost in the first round of the regional tournament last season, but Baughman said the Titans can contend for the title this year.

“We’re a really close-knit group of guys, and we love playing for each other and for our coach,” he said. “And I really don’t think we have played our best baseball game yet, all year we haven’t had one game where every facet of the game’s been rolling for us. I think if we can get that going for the postseason we’re going to be a really, really dangerous team.”

This is Mercer’s second season under Christopher, the Titans’ third coach in the past four years.

“He’s very relatable with the guys, but whenever you mess up he’ll be right there to jerk your tail and get you in line,” Baughman said. “He’s really good about balancing player relationships and still being our coach.”

Mercer was the state runner-up in 2011 and 2013, and Baughman said the continuity in coaching is putting the program in a place where it can compete for championships again.

“Just the consistency of having coaches willing come out here and dedicate themselves to player development,” he said. “We’re getting that culture back, that winning culture and tradition of Mercer County baseball.”

Christopher said better depth will strengthen the program, and that’s happening from top to bottom. Half a dozen players who hadn’t played baseball in a couple of years have returned to the high school team, new middle school coaches are bringing in more players at that level and youth registration is approaching an all-time high.

“It’s just bringing the energy back to the program and getting people excited to grow up and be a Mercer County Titan on the baseball field,” Christopher said.