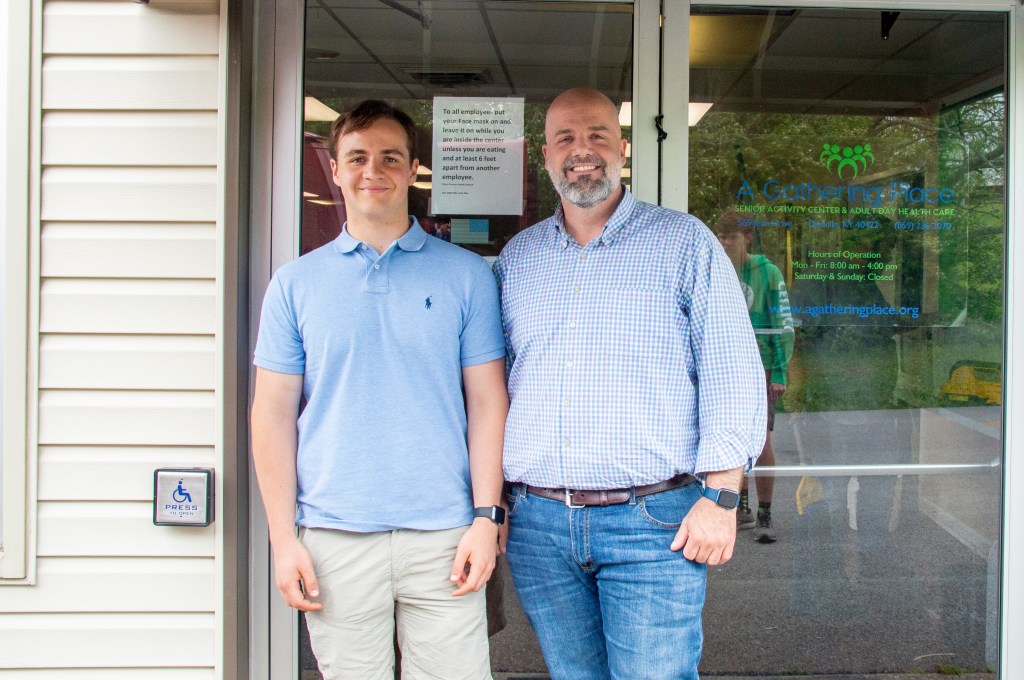 Local Boy Scout Benjamin Guerrant, Jr. (left) led a project to install handicap door mechanisms at A Gathering Place, with help from his father Ben Guerrant Sr. (right), who is director of the center. Photo by Fiona Morgan

Local Boy Scout Benjamin Guerrant, Jr. has earned the rank of Eagle Scout by leading a project to install handicap door mechanisms at A Gathering Place.

A Gathering Place is a senior activity center and adult day health care in Danville. The building, built in 1996, was not required to have wheelchair-accessible doors, and did not have handicap door openers, until now.

“Getting in and out of the doors occasionally has proven to be problematic for those that struggle with mobility,” Guerrant said.

Benjamin started collecting donations for the project about three months ago. He raised $1450 from about eight to 10 donors, completed paperwork for installation approval, and found workers to install the mechanisms. 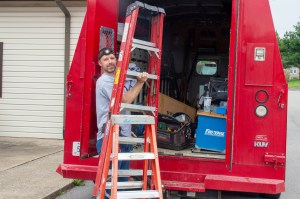 Christian Wiley of Wiley Electrical Contractors agreed to donate the labor to install the project. Workers from Wiley Electrical installed the door mechanisms on both doors to the center last week.

“It’s something we’ve needed for a long time, and having the ability to have that done through [Benjamin’s] efforts and the donation from Wiley Electrical is going to be really helpful to both the seniors and the adult day health care clients,” Guerrant said.

A junior at Boyle County High School and member of BSA Troop 27, Benjamin was a Cub Scout in first grade. He became a Boy Scout at 11 years old, and had the goal to become an Eagle Scout.

Only a small percentage of Boy Scouts ever earn the rank of Eagle Scout. The ranking requires scouts to complete an Eagle service project that helps the community, which usually takes the form of a small construction project or donation drive.

“I like this project because a lot of Eagle Scouts will build something like a bench, or picnic tables, and I feel like a lot of those projects aren’t used every day; but I think this is a project that will be used every single day,” Benjamin said.

Benjamin has assisted other Eagle service projects in his troop, such as building a beach volleyball court at a church, and a pavilion at Millennium Park. With his own project complete after months of planning, Benjamin is proud of the end result.

“I’m just so glad and so thankful that I stuck with it because I really think [Boy Scouts] has made a positive impact on my life,” Benjamin said. “Doing projects like this I think teaches kids a lot of valuable lessons and skills for the future.”

“I want to extend a very heartfelt thank you for their willingness to recognize the importance of both the Eagle Scout program and the importance of what we do here at A Gathering Place, and how their donation is going to be such a positive impact for a lot of people,” Guerrant said.