The Perryville City Council passed the first reading of an amendment to the nuisance ordinance, adding noise as a nuisance, at their meeting on May 5.

The decision comes after the council passed a motion in March to draft a noise ordinance.

Police Chief Parker Hatter had brought up that residents have made noise complaints and were asking about a noise ordinance, which the town does not have. Police respond to noise complaints on a case-by-case basis.

Perryville modeled their solution after what other cities have done about noise, which is to add it to the nuisance ordinance.

The council passed the first reading of an ordinance amending Chapter 92 of the ordinance code regarding nuisances. The ordinance reads as follows.

Section 1: “It shall be unlawful for any person within the corporate limits of the city of Perryville to make, continue or cause to be made or continued any loud, unnecessary or unusual noise which either annoys, injures or endangers the comfort, repose, health or safety of others, unless the making or continuing of same be necessary for the protection or preservation of property; or the health, safety, life or limb of some person.

Section 2: “Loud, unnecessary or unusual noise shall include, but not limited in its inclusion, to the following:

• A- “The sound of any horn or signal device on any automobile, bus or other vehicle, except as a danger signal, so as to create any unreasonably loud or harsh sound, or the sounding of such device for an unreasonable period of time, or the use of any gong or siren on any vehicle other than police, fire, or other emergency vehicle.”

• B- “The playing of any radio, phonograph, electronic device, machine or other musical instrument, singing, shouting, and crowd noises in such a manner or with such volume and for such a sustained time, particularly during the hours of 10 p.m. and 6 a.m., so as to annoy a reasonable person or normal sensitivity for any time with louder volume than is necessary for convenient hearing for the person or persons who are in the room, vehicle, immediate vicinity or chamber in which such sound is being made, and who are voluntary listeners there too.”

Section 3: “Outdoor live music is allowed subject to zoning restrictions in any and to the sound decibel limitations of section 2 herein, between noon and 8 p.m. Sunday through Thursday, and between noon and 10 p.m. on Fridays and Saturdays, except from this provision are school events, events with permits obtained from the city, commemoration and other events as from time to time are permitted by the city. No off-site live music shall be permitted, except as specifically permitted by the city.”

Perryville has changed its hours for city hall to allow more afternoon hours, and to better accommodate the clerk’s work schedule. The changes are in effect as of Monday. The hours are:

Perryville will be receiving another round of American Rescue Plan Act (ARPA) funds soon. However, City Clerk Ingrid Walker said that the city did not receive the full amount they were supposed to get in the first round.

Walker explained that, as she was recently going through the city’s financial records, she noticed they got much less money than promised from the ARPA funds. Perryville was supposed to get $193,960 in two payments. The first payment was to be about $97,000, but the city only received a check for about $16,000.

The second check, which is supposed to also be about $97,000, will arrive on July 22. The council said they will work to make sure the city receives that amount, and will fight to get the rest of the amount of the first check.

• Passed a motion to shut off 25% of the city street lights to save energy.

• Passed a motion to add 2% employee raises to the city budget. This raise percentage is the same as last year’s.

• The new walking bridge in downtown Perryville has been completed and is open for foot, wheelchair, and bicycle traffic. 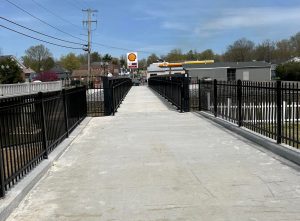 The new walking bridge in Perryville over the Chaplin River is complete. It is for pedestrians, wheelchairs, and bicycles only. No lawn mowers, horses, motorcycles, or 4 wheeler/ATVs are allowed on the footbridge. Photo courtesy of Perryville Facebook page.