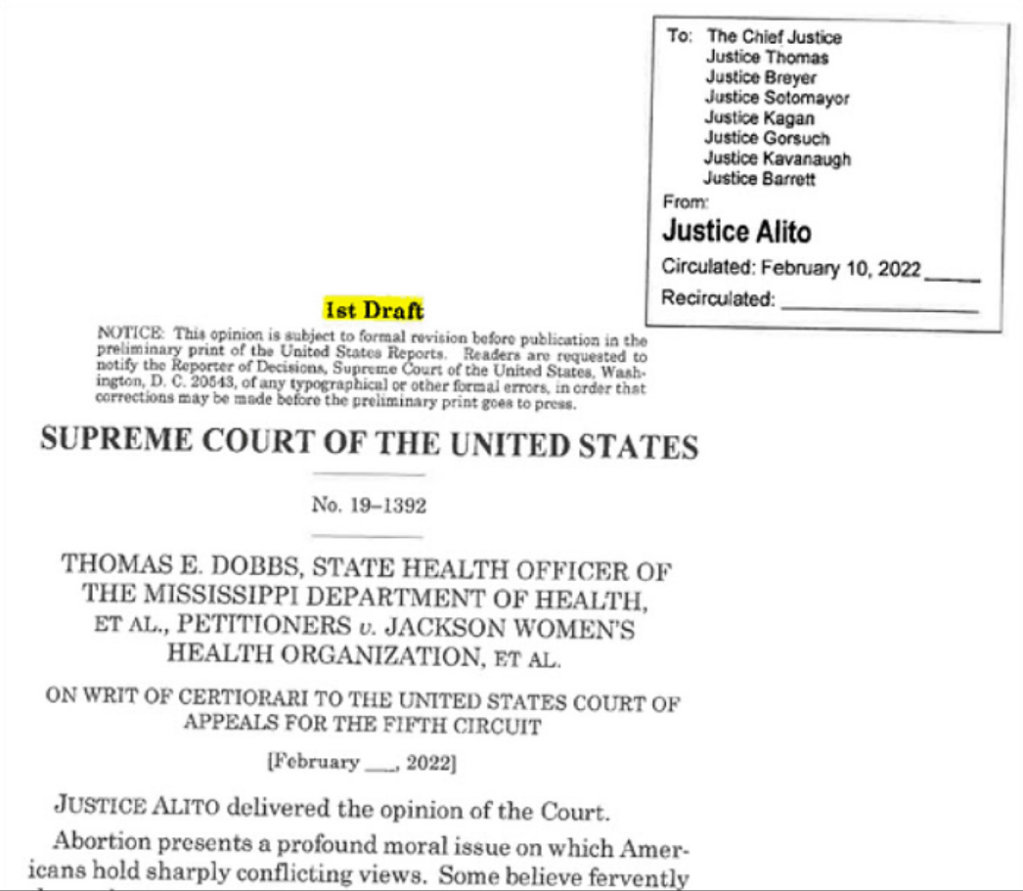 Screenshot of image of Scribd document from Politico

If a leaked draft of a U.S. Supreme Court decision that would overturn the court’s 1973 Roe v. Wade decision becomes final, legal abortion in Kentucky would end immediately because of a “trigger law” the state legislature passed to take effect if Roe is overturned. But for now, abortion services are still available from two Louisville clinics. The decision is expected by the end of June.

The draft opinion in Dobbs v. Jackson Women’s Health Organization, published by Politico, would strike down the decision that has guaranteed the right to an abortion until a fetus can live outside the womb, roughly the 23rd week of pregnancy, as well as Planned Parenthood v. Casey, a 1992 decision that upheld but modified Roe, barring “undue burdens” to abortion.

“We hold that Roe and Casey must be overruled,” Justice Samuel Alito wrote in his draft opinion, which has a circulation stamp of Feb. 10. He adds later, “It is time to heed the Constitution and return the issue of abortion to the people’s elected representatives.”

The case will determine the constitutionality of Mississippi’s 15-week abortion ban, which raises the issue of whether a state can ban abortion before fetal viability. The court could do that without fully overturning Roe, by setting a stricter standard, but Alito’s draft says there is no constitutional right to abortion.

The Kentucky General Assembly recently passed over Gov. Andy Beshear’s veto of a wide-ranging anti-abortion bill that also bans abortions after 15 weeks, modeling the Mississippi law. A federal judge has extended until May 19 a modified restraining order that applies to portions of the law, but the judge did not provide specifics, Alex Acquisto reports for the Lexington Herald-Leader.

Twenty-six states, including Kentucky and five bordering states, are poised to move quickly to ban abortion should Roe be overturned, according to the Guttmacher Institute, a reproductive-health policy organization that favors abortion rights.

In 2019, the legislature passed the “trigger law;” in 2021, it voted to add to the state constitution a statement that it does not secure or protect a right to abortion or funding of abortion; voters have the final say on that this November.

Politico reports that Alito was writing for a majority that includes Justices Clarence Thomas, Neil Gorsuch, Brett Kavanaugh, and Amy Coney Barrett. Chief Justice John Roberts has confirmed the draft’s authenticity, stressed that it is not a final position and has ordered an investigation of the leak, a rare breach of the court’s confidential processes.

Alexis McGill Johnson, president and CEO of the Planned Parenthood Federation of America, called the opinion “horrifying and unprecedented” and reminded Americans that for now, abortion is still legal.

Angela Cooper, communications director at the American Civil Liberties Union of Kentucky, pointed out that Kentucky women had to travel out of state for abortion care during the eight days Kentucky’s two abortion clinics were closed as they waited on the judges ruling around the latest anti-abortion bill.  That is a preview of what it would be like if abortion care becomes illegal in Kentucky, she said.

“Abortion is still legal in Kentucky,” she said. “We just encourage anyone who is seeking reproductive care to contact the clinic first and to know that that care is still available in the state.”

Douglas condemned the fact that the ruling was leaked, but said the General Assembly was “ready” to continue to create “some of the toughest laws that there are” on abortion, Acquisto reports.

“In addition to the current challenge to HB 3 enacted this year, three laws remain under challenge in federal courts and have not been enforced,” Deborah Yetter reports for the Louisville Courier Journal. “They include a pair of 2019 laws banning abortions after six weeks gestation and if the woman is seeking one because of the race, gender or disability of the fetus. Also, a 2018 law banning a procedure generally used after the 14th week of pregnancy, called dilation and evacuation, remains subject to a legal challenge.”