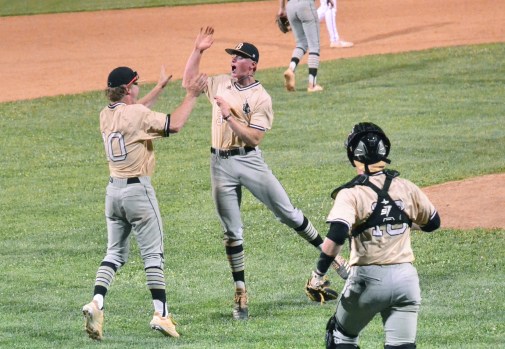 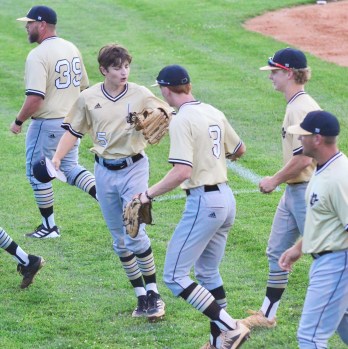 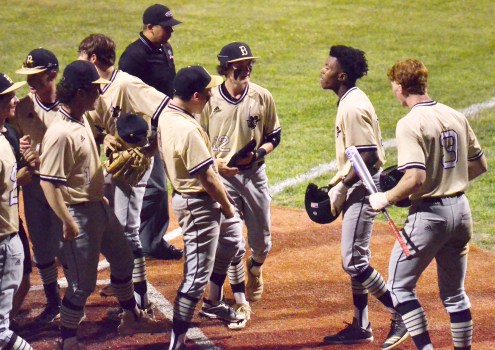 Sage Dawson, second from right, celebrates with Boyle County teammates following his two-run home run during the seventh inning Friday. It was one of two home runs for Dawson during Boyle’s 9-6 victory over Danville in the 45th District Tournament championship. Photo by Mike Marsee. 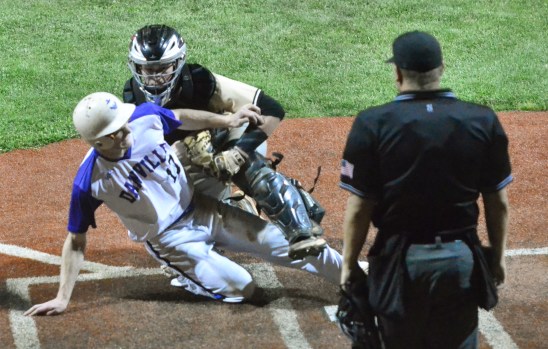 Boyle County catcher Luke Gaffney tags Danville’s Jack Simpson to retire him at home plate on a fielder’s choice during the sixth inning of Boyle’s 9-6 victory over Danville in the 45th District Tournament championship. Photo by Mike Marsee.

It was only a month or so ago that Adam Blair said the Boyle County Rebels weren’t getting the timely hits he thought they needed.

They’re getting them now.

Timely hits came in bunches for Boyle in the 45th District Tournament championship, powering the Rebels to their first district title in four seasons and putting a smile on their coach’s face.

“It’s been a fun group to watch,” Blair said. “It’s just special to see them when they get to run out on the field, the expressions on their faces. That’s why we do this as coaches.”

Every run the Rebels scored in their 9-6 victory over Danville on Friday was the result of a two-out hit, and the sum total of those hits gave them all the offense they needed to capture the title they wanted.

Boyle scored 22 runs in its two district tournament games to win the 45th District for the first time since 2017.

“I just think during the district everybody locked in. Everybody started hitting and just went on a roll,” Boyle left fielder Sage Dawson said.

No one was more locked in than Dawson, who was named the tournament’s most valuable player after going 6 for 8 at the plate with three home runs — including a pair of grand slams — and 10 RBIs.

Dawson delivered the biggest blows in a title game battle of top-20 teams that was punctuated by big blows.

He launched a bases-loaded blast over the scoreboard in left-center field to give No. 18 Boyle (24-7-1) a 4-0 lead in the first inning Thursday before play was suspended due to lightning.

The Rebels remained in front after play resumed the following night, and Dawson gave them some important insurance runs in the top of the seventh inning with a two-run homer to left field that gave them a 9-4 lead.

“I got something started early and it just kept going through the whole tournament,” Dawson said.

Boyle is on a roll heading into the 12th Region Tournament, which begins Monday night with four first-round games hosted by district champions before the tournament shifts to Somerset for the semifinals and finals.

Boyle will host 46th District runner up West Jessamine in its first-round game at 7 p.m. Monday.

“It’s special for our seniors because they get to play another game on our field,” Blair said.

No. 7 Danville (27-8) was denied one more home game for its seniors after losing at Admiral Field for only the fourth time in four years. The Admirals play at 46th District champion Mercer County at 7 p.m. Monday.

“They wanted to play that region game here, but whether you’re the winner or the runner-up, there’s not many easy games next week,” Danville coach Paul Morse said.

Boyle defeated Garrard County 13-1 and Danville blanked Lincoln County 6-0 in the semifinals Tuesday to set up the final between the two teams that have won all but one of the 45th District titles awarded in the 21st century.

Then Boyle needed three days to defeat Danville for the second time in three meetings this season and capture the season series for the first time since 2018.

The game was rained out Wednesday and interrupted Thursday after only half an inning, but Blair said the celebration that followed the final out Friday was worth the wait.

“It’s been a fun group to watch,” he said. “It’s just special to see them when they get to run out on the field, the expressions on their faces. That’s why we do this as coaches.”

Boyle’s offense has been on the increase for about four weeks, during which time the Rebels have won 12 of 14 games and scored eight runs or more nine times.

“Our guys have really been seeing it well for the past 12 or 13 games,” Blair said. “We’ve been playing a little bit of small ball but also hitting a few balls out.”

“We’ve been in the cage a lot more, taking it more serious,” Dawson added. “I think everybody knew that this game would happen and we really wanted to win, so we got locked in and did what we had to do.”

Dawson got things started before the stoppage Thursday with his two-out grand slam, and he went on to go 3 for 4. He said it meant a great deal to have a big game against his former school  — he transferred from Danville to Boyle before the 2021 season  — and Blair said it was a big week for the sophomore, who now ranks second on the team in home runs (seven) and RBIs (37).

“Sage did well,” Blair said. “I don’t know too many people who’ve had grand slams in back-to-back games. I only hit one my whole life, and he’s hit three this year. He’s the guy you want up when the bases are loaded.”

Kason Myers hit a solo home run and Luke Gaffney and Cameron Owens had RBI singles for the Rebels. Like Dawson’s two homers, they all came with two outs.

“I think that’s special. It shows that we’re not tightening up in those situations. We’re playing the game and letting the ball come to us,” Blair said. “I’m really happy with our lineup right now, just the way they’re swinging it all the way around.”

In the other dugout, Morse was not pleased that Boyle had so many two-out opportunities. Danville pitchers walked five batters — all in the first two innings — and the Admirals didn’t make a couple of plays he said they should have made as their string of three straight district titles came to an end.

“If you don’t play a clean game, it doesn’t matter who you’re playing,” Morse said.

Logan Smothers did all he could to keep the Admirals in the game. He hit a two-run home run in the second inning after Boyle had taken a 5-0 lead, and he followed that with a towering solo home run in the fourth.

He also pitched the final six innings Friday after the resumption of play — starter Brady Baxter threw too many pitches in the first inning Thursday to be allowed to pitch on consecutive days — and overcame a rocky start to retire nine straight batters over the middle innings and record nine strikeouts.

It hasn’t been a smooth senior season for Smothers, who overcame an elbow strain that kept him off the mound early in the season and whose father recently underwent a liver transplant.

“It was good to see him have a good day. I’m proud of him and proud of the way he’s battled,” Morse said.

Baxter went 3 for 4 at the plate with a two-run home run in the seventh inning.

The Rebels’ defense came up with big plays behind their pitchers, retiring three runners on the basepaths.

However, Blair said the Rebels do not feel satisfied.

“District is great, but we want to move on and give ourselves a shot at regions and further on,” he said.

Of course, so does Danville, which won the regional championship and reached the semifinals of the state tournament last season.

“In the big picture, we still get to play next week and that’s the beauty of it,” Morse said.