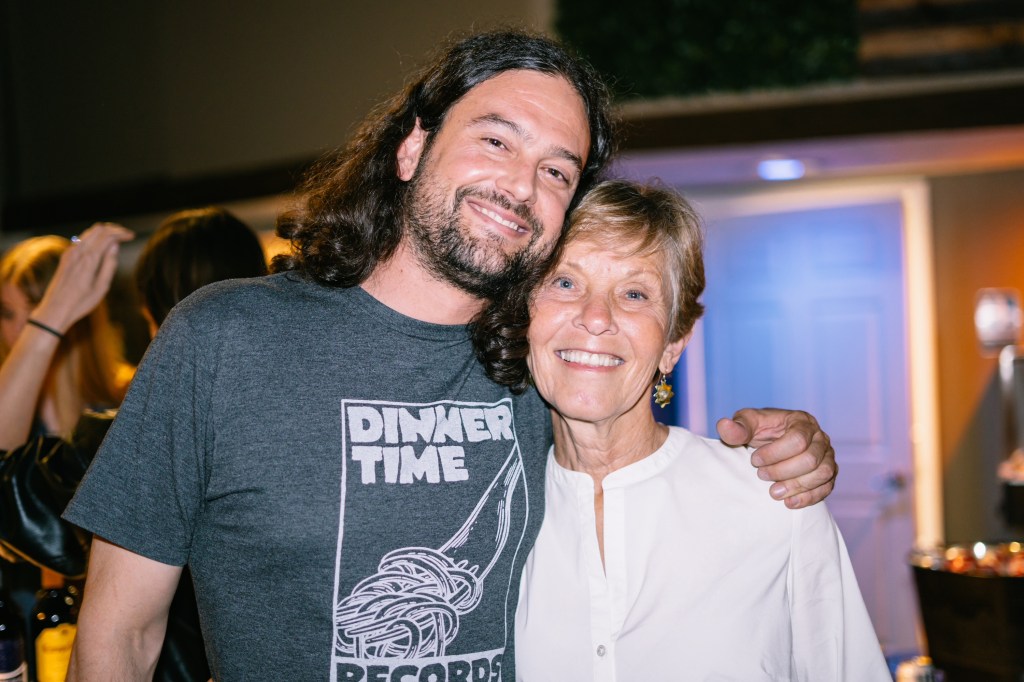 Aaron Raitiere and his mom Sherry Martin found themselves becoming a songwriting duo during quarantine. So much so that Martin ended up getting signed by a label. Photo submitted.

Sherry Martin has been learning a lot about songwriting from her son, Aaron Raitiere. Raised in Danville, Raitiere has been in Nashville for almost two decades now, building an impressive career as a bona fide songwriter.

And now, Martin, who retired as a longtime nurse and ER case worker at Ephraim McDowell, has been given a songwriting deal of her own. She even found herself on stage with her son performing with The Oak Ridge Boys at the Grand Ole Opry.

“The whole thing is just absurd,” Raitiere says from Nashville, sounding like he’s still beaming from his debut on a stage he’d dreamed about. “It just happened.”

‘When I need a little Jesus …’

Back when COVID hit, Raitiere and Martin quarantined together at her home on Lake Barkley in Cadiz. It’s an incredible place to write, Raitiere says about the property his mom saved for and built as she commuted to and from her job at the hospital in Danville.

“If he was throwing out — that means singing a song — I’d say ‘put this instead of this,’” Martin says. “To me, it wasn’t ‘collaborating,’ it was like a suggestion.”

“She grew up milking cows and killing chickens in western Kentucky,” Raitiere says. “Her brothers were all coalminers. Her dad ran a service station, sat under a tree and traded refrigerators for 30 years. She got a songwriting deal because everything she does is a country song …”

Martin says when Raitiere was contacted and told that The Oak Ridge Boys were trying to finish an album and “wanted songs for the front porch, he said ‘Mom, what do you think?’”

She says they started pulling out her old journals. “I’ve always told my kids that I write my prayers, my thoughts for what I hope for them … That’s where some of it came from.”

Raitiere says in country music, there’s a lot of church going on. “She’s always been my resource when I need a little Jesus …”

And from that came “Love, Light and Healing.” Martin says, “then he sang it down with some kind of harmony … and from there, he sent it over to Oak Ridge Boys and they cut it. And that was their first release from the album.”

She stays impressed by her son’s talents, and how he “learned how to wheel and deal” in order to make it in a tough industry. He’s also an accomplished visual artist, and has sold paintings at a recent exhibit he put on.

Martin says, “He’s really persevered, I’ll tell you that. In the dressing room at the Opry, they gave him a quote from Eddie Montgomery … something about no matter what awards you win, you haven’t made it till the Opry.’ I thought that was ironic.”

From the ER to the Opry stage 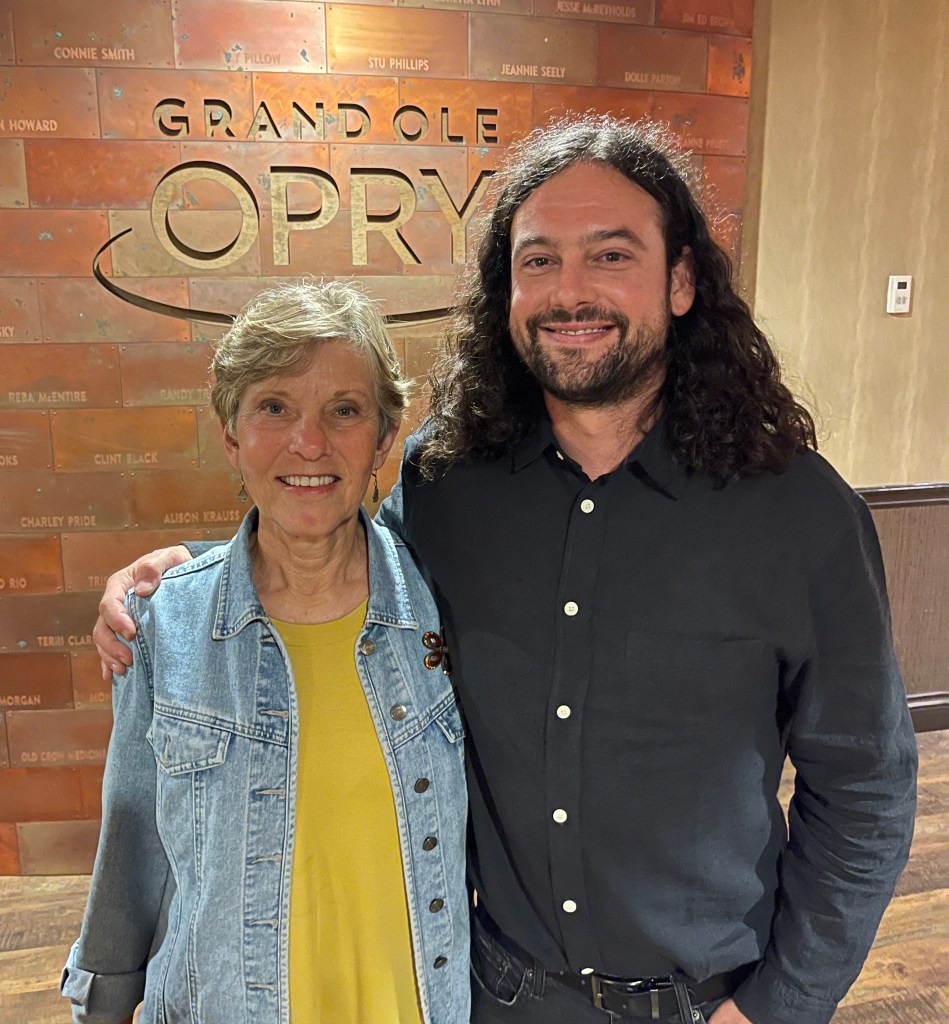 Sherry Martin and son Aaron Raitiere are all smiles at The Grand Ole Opry, where Raitiere made his debut appearance, the same month he’s released his debut album. Martin has also been signed as a songwriter by Warner Chappell Music, and says she’s learned a lot from her son, who moved to Nashville in his early 20s. “He’s really persevered,” she says, about his success. Photo submitted.

Someone from Warner Chappell Music contacted Raitiere, “asking if he knew who Sherry Martin was, she’s getting royalties … and that I needed to be signed up,” she says. “So, I got signed up.”

Then, Raitiere was doing a residency at The Basement in Nashville, and some people from the Opry saw his show. “They invited me to go for it,” he says. He had artist Anderson East and Bob Weir (of the Grateful Dead) with him, on stage.

Then, at the last minute before performing “Love, Light and Healing” with The Oak Ridge Boys, the group asked if Martin could also join them on stage.

The whole May 3rd night was amazing, he says. And what perfect timing; his very first album had just come out, “Single Wide Dreamer,” released by Dinner Time Records/Thirty Tigers and receiving rave reviews.

Not only was his debut album produced by East and Miranda Lambert, but it features collaborators like Weir, Dave Cobb, Natalie Hemby, Ashley Monroe, Robert Randolph, Foy Vance and Waylon Payne.

“But really, this shouldn’t be about me …” he says, listing off his mother’s achievements over the years, like being a single mom. “If anything, it should be something like ‘From the ER to the Opry stage.”

Raitiere describes his mom as a strong woman, mentally and physically. “She’s like a rock … and she chainsaws alone. She’ll say she’s out working in the garden, but really she’ll be on a tractor up a steep hill that no one else will drive up.”

Martin also beat breast cancer when Raitiere was in college. “She had a full mastectomy and hysterectomy,” he says, and that she serves as an advocate for others. “She gets phone calls all the time. I refer everyone I know to her who gets diagnosed. She tells them what’s coming, and what you gotta do, and that you can beat it. She’s a hell of a nurse.”

Raitiere says it wouldn’t surprise him if others didn’t begin working with his mom, and that he’s had some friends already mention it. Martin says so far, it’s been a great distraction from the adjustments of being retired.

Who knows what will happen, she says, but she’s open to opportunities.

Raitiere says sure, some talents can be called “innate,” especially since his mom has always written, and his father is also a musician.

“But anyone can do this. But you got to practice … All the words and notes are right there, all you have to do is put them in the right order. And I think mom — she just is the right order. Her life is what everyone wants to write about.”