There are some things Logan Smothers would probably like to forget about this spring, but this was a night to remember.

Smothers made the biggest pitches and had the biggest hits Wednesday night to lead Danville to its second consecutive regional baseball championship.

Then he tipped his hat toward the parking lot.

Watching Danville’s 3-2 victory over West Jessamine in the 12th Region Tournament championship from a vehicle parked well beyond the right-field fence at Charlie Taylor Field was Smothers’ father, less than three weeks removed from a liver transplant.

Dustin Smothers saw his son pitch 6 2/3 innings for the win, homer and drive in three runs to help Danville get back to the state tournament.

“It’s a storybook situation for him, and I’m super proud for him and happy for his family,” Danville coach Paul Morse said. 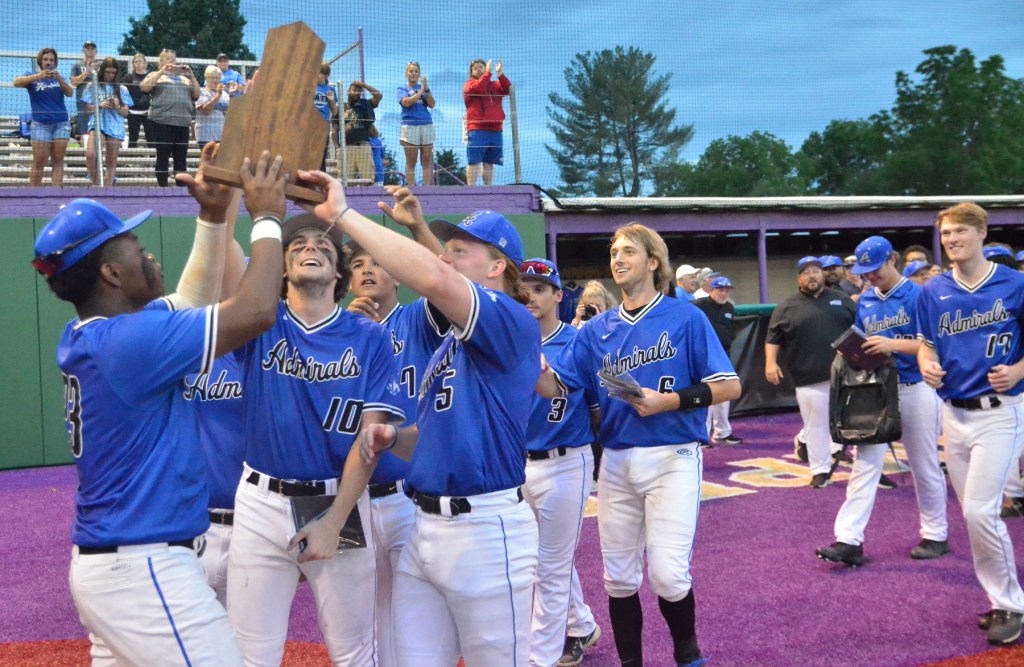 Danville seniors K.J. Stanfield, Logan Smothers and Keegyn Wilcher, left to right, hoist the trophy as their teammates join them Wednesday following the Admirals’ 5-2 victory over West Jessamine on Wednesday in the 12th Region Tournament championship. Photo by Mike Marsee.

Danville (30-8) is no Cinderella story, with nine seniors leading a team that reached the state semifinals a year ago, but the Admirals had to recover from a loss in the district finals to win their fifth regional championship.

“I feel like people doubted us,” Logan Smothers said. “We just had this in mind. Obviously, we wanted to repeat. There’s nothing like playing at state, and I just felt like we wanted it more.”

The Admirals had to earn it against West Jessamine (17-19), a young team that battled them to a scoreless tie for 4 1/2 innings before they broke through.

Morse said he and his staff had remarked earlier in the week about how loose the players were compared to a year ago, and he said there was no apprehension apparent before they took the lead in the title game.

He said the experience so many of them had last year in the postseason had much to do with that.

“It’s just being there and knowing the situation and the circumstances,” Morse said. “There was no uptightness, there was no panic in our dugout when it was 0-0 in the fifth.”

Danville will put its experience to use again next week in the state tournament at Kentucky Proud Park in Lexington. The Admirals will face 16th Region champion Boyd County (25-9) in the first round at 10 a.m. June 2.

“The way the state tournament’s set now, I feel like we have a really good shot to be back (in contention for the title),” Smothers said.

Brady Baxter, who singled and scored a run Wednesday, was named the most valuable player of the regional tourney after going 7 for 10 with a home run, two doubles and four RBIs over three games and striking out 13 batters while allowing only one run on one hit in Danville’s first-round win over Mercer County. 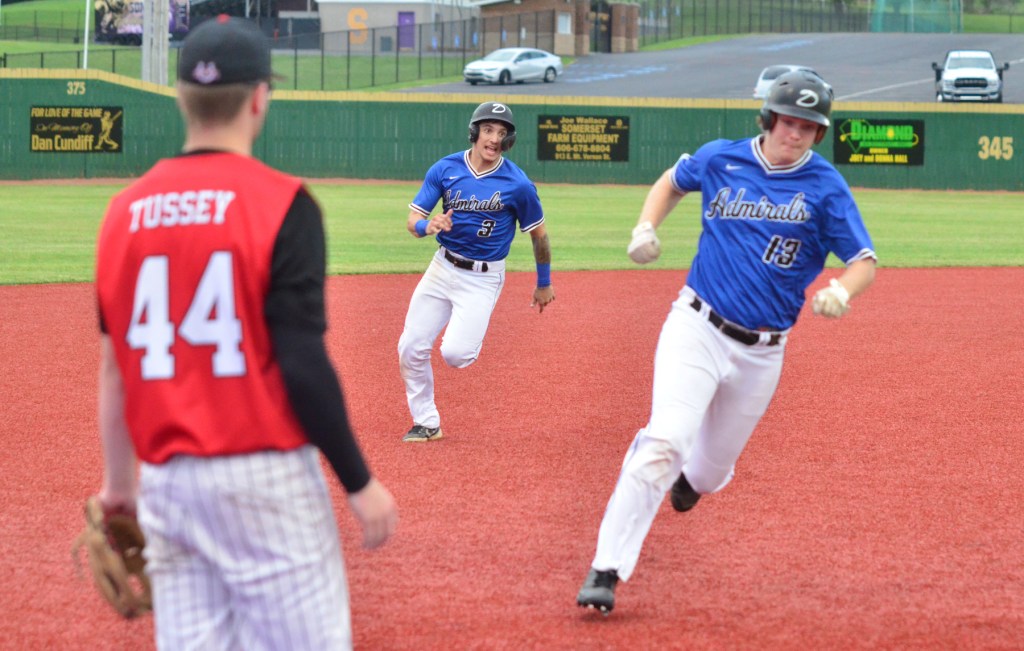 Preston Barnes (3) gains on Danville teammate Brady Baxter as the two runners round third base and West Jessamine third baseman Pierce Tussey looks on during the sixth inning of the 12th Region Tournament championship Wednesday. Both runners scored on a double by Logan Smothers to provide the final runs in the Admirals’ 5-2 victory. Photo by Mike Marsee.

The Admirals batted .313 in the tournament, but they had only two hits over the first four innings Wednesday before Smothers led off the fifth with an opposite-field home run down the right field line.

“Originally I didn’t think it was going to be out. I knew I squared it up, and as soon as I saw (the right fielder) turn his back I knew it was gone,” Smothers said. “It was a real momentum changer for us.”

Minutes later, Jarius Bryant smacked a two-run homer to left field to stake Smothers and the Admirals to a 2-0 lead.

Smothers had pitched out of a bases-loaded jam in the fourth inning, but he couldn’t escape trouble in the sixth, as West Jessamine scored twice on two walks and RBI singles by Ryan Long and Eli Nickell.

Danville got those runs back in the bottom of the inning, however, when Smothers smacked a double off the right-field wall that drove in Baxter and Preston Barnes, who nearly caught Baxter on the basepaths and slid into home plate right behind him.

“It was really important for us,” Smothers said. “It’s a lot safer to pitch with three extra runs than it is with one run.”

Smothers wanted badly to finish the game on the mound. He had survived two previous mound visits by Morse, but the coach took the ball after Smothers gave up a two-out double in the seventh inning.

Sam Matherly, who also had two hits and scored a run, got the final out after Smothers, who had thrown 116 pitches, allowed two runs on four hits and three walks.

“I tried to take him out three times, and the third time I said, ‘You don’t have a choice any more, you’re coming out,’” Morse said. “He told me to take my a– back to the dugout twice, and I love that.

“I’ve been looking for that the last four years, that bulldog stuff, and he showed it there today, and he wanted it.”

Smothers had to recover from an elbow injury that kept him from pitching early in the season.

Meanwhile, his father’s health was growing worse as he awaited a liver transplant that came May 5.

Dustin Smothers returned to the ballpark to watch his son hit two home runs May 20 in Danville’s loss to Boyle County in the 45th District final, and he watched from afar again Wednesday. 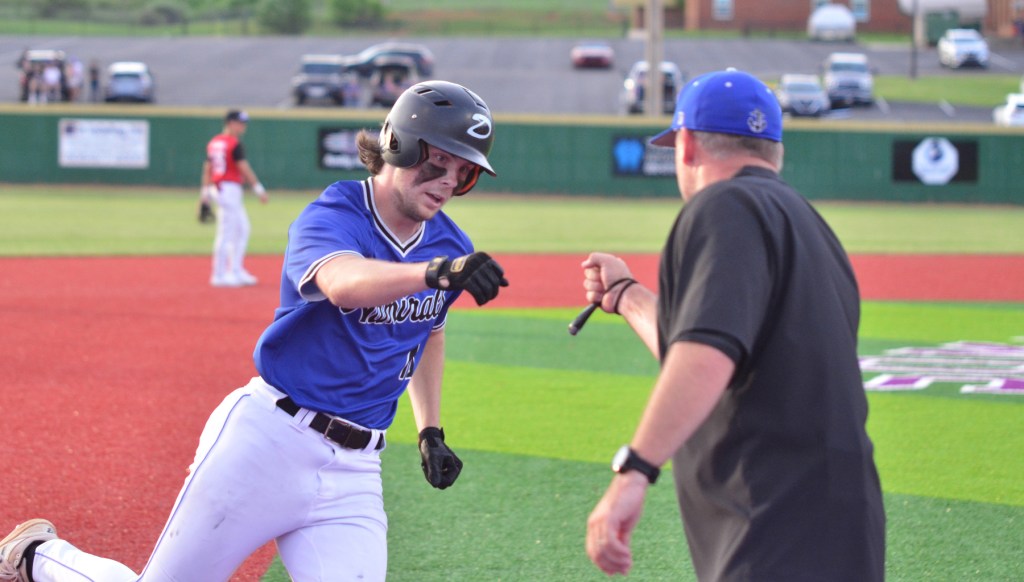 Logan Smothers of Danville is greeted by coach Paul Morse as he rounds third base following his solo home run during the fifth inning of the Admirals’ 5-2 victory over West Jessamine in the 12th Region Tournament championship Wednesday. Photo by Mike Marsee

Logan Smothers pointed to his dad as he rounded the bases after his home run, just as he had done in the Boyle game, and he did so again during the celebration following the final out.

“All these games have been for him,” Logan Smothers said. “I’m actually proud of him. I know it’s tough to sit out there in the car, and he’s in pain. It’s hard recovering. I’m just proud of him for sticking through it and continuing to support me.”

Smothers said he was also proud of the way the Admirals bounced back after the loss to Boyle, which he said was something of a wake-up call.

“I think Boyle was the perfect loss for us,” he said. “It was like a punch in the gut for us.”

Danville defeated Mercer 6-1 in the first round, then beat Wayne County 7-3 in the semifinals to set up a rubber match with West Jessamine. The Admirals and Colts had split two close games during the regular season.

West Jessamine is coached by Blake Perry, the former Boyle County standout who worked on his game for years at Morse’s academy and later worked there with many of Danville’s current players as he began his coaching career.

Perry chatted with several of his former pupils before and during the game and gave them congratulatory hugs during the postgame handshake line.

“We’ve known him for a long time,” Morse said of Perry. “He’s doing an awesome job there, and I’m super proud of him and … what he’s got going.”

The coach also said he’s proud of his players and especially of the nine seniors who led the Admirals who another title.

“Most of these seniors I’ve had since the sixth grade, a lot since they were 7 years old,” Morse said. “Just to see them grow and improve physically and mentally, it’s definitely rewarding.”