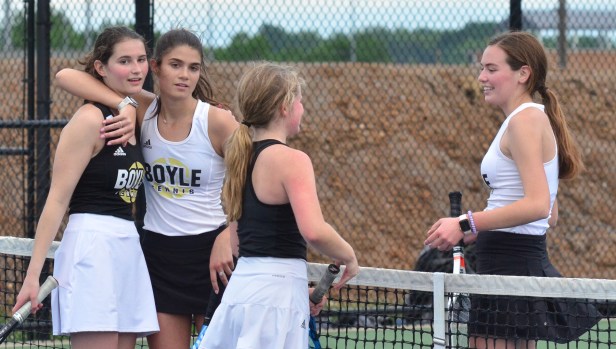 Boyle County teammates Sammy Cusato, Maggie Cerqueira, Maya Smith and Edie Clark greet each other at the net after Clark and Cerqueira defeated Cusato and Smith on Tuesday in the girls doubles final at the 12th Region Tournament. Photo by Mike Marsee. 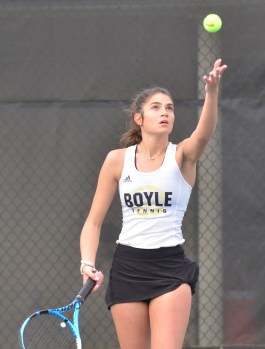 Maggie Cerqueira of Boyle County tosses the ball as she serves during Cerqueira and Edie Clark’s victory over Boyle teammates Sammy Cusato and Maya Smith on Tuesday in the girls doubles final at the 12th Region Tournament. Photo by Mike Marsee. 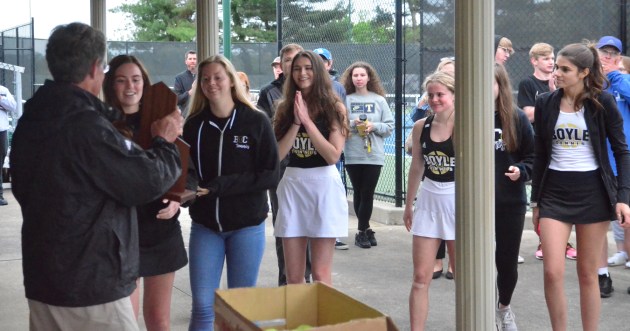 The Boyle County girls accept their team trophy from tournament director Matt Vonderbrink on Tuesday after winning the 12th Region Tournament for the second consecutive year. Photo by Mike Marsee. 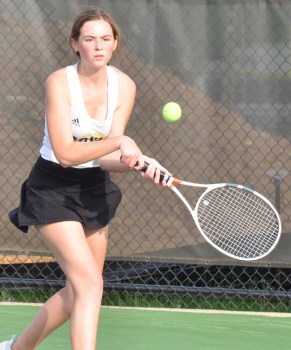 Edie Clark of Boyle County prepares to return a shot during Clark and Maggie Cerqueira’s victory over Boyle teammates Sammy Cusato and Maya Smith on Tuesday in the girls doubles final at the 12th Region Tournament. Photo by Mike Marsee. 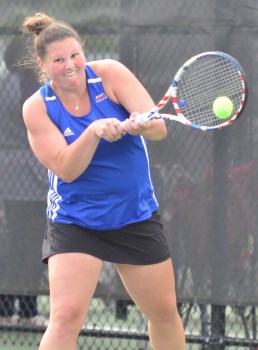 Sara Dunn of Mercer County returns a shot from the baseline during her loss to East Jessamine’s Susu Prince on Tuesday in the girls singles final at the 12th Region Tournament. Photo by Mike Marsee.

The Lady Rebels were assured of their second consecutive regional team championship, and they knew they would capture the regional doubles title as well.

So the pressure was off when Boyle’s two girls doubles teams found themselves facing each other Tuesday in the finals of the 12th Region Tournament at Centre College.

That was evident in their play, for while regional championship matches between teammates have been awkward at best and tense at worst over the years, the four girls in this match and those who cheered them on took a more lighthearted approach.

It capped a big week for the Boyle girls, who repeated as regional champions for the second time in five years.

The Lady Rebels were assured of no worse than a tie for first place in the team standings before the semifinal and final rounds were played Tuesday.

They locked up their fifth regional title when both of their doubles teams survived stressful semifinals, each winning super tiebreakers 10-8 after splitting two sets with their respective opponents.

That assured the doubles final would be Boyle versus Boyle, but it also took the pressure off the four girls who would play it out.

That meant Costello could just relax and enjoy the match.

“It’s just amazing that it happened that way and I just got to sit back and be a fan,” he said. “Obviously, I wasn’t going to try to coach there. We just had fun with it.”

The coach found a spot in the stands alongside Boyle fans who cheered both sides’ successes.

“I thought it was nice that they were supporting both of us,” Smith said.

On the court, the atmosphere was relaxed, as players on both sides chatted with each other during changeovers and occasionally interacted with the crowd.

“We were having fun,” Clark said. “We probably should’ve been a little more serious, but, you know.”

“It was really just fun. It was like another day at practice,” Cusato added.

“After playing with them in practice you kind of get the gist of each other, and then you get out here and you’re just nervous,” Cerqueira said. “You don’t really know what to expect because everything can change out here.”

Costello said he thought Cerqueira and Clark, who lost in the finals a year ago, had a good shot at making it to the last line of the bracket this season.

“That was my goal coming back for this season, and then I quickly realized, ‘Hey, my No. 2 doubles team is not that bad,’” he said. “It’s like having two No. 1s on your team.”

Cerqueira and Clark, both juniors, said they have worked hard over the past year to get another shot at the title.

“It’s pretty rewarding after all the hard work,” Cerqueira said. “Last year we got to the championship and then just fell short.”

This is their second year as doubles partners at the high school level, though they also played together in middle school.

“I think we’ve grown a lot together. We work well together,” Cerqueira said.

It is the first season that Cusato, a junior, and Smith, a freshman, have played doubles together, and they were thrilled to make it all the way to the finals.

“We honestly didn’t really expect it, but we were really excited when we got the opportunity,” Cusato said.

Costello is excited to be taking five girls to the state tournament — Jaina Burkett qualified by reaching the singles semifinals for the second consecutive year — from a team that has no seniors.

“Hopefully we can do this all again next year,” he said.

Sara Dunn of Mercer County made a strong run at the singles title, reaching the finals and taking the first set from East Jessamine’s Susu Prince before falling 3-6, 6-2, 1-0 (10-8).

Matthew Da Costa of Boyle qualified for the boys state tournament for the second year in a row by reaching the singles semifinals.

Boyle tied for second place but lost the runner-up trophy to Pulaski County on the tiebreaker of most games won by all of the teams’ entries.

The state tournament will begin Tuesday in Lexington and Nicholasville.