Boyle softball moves within one win of regional title 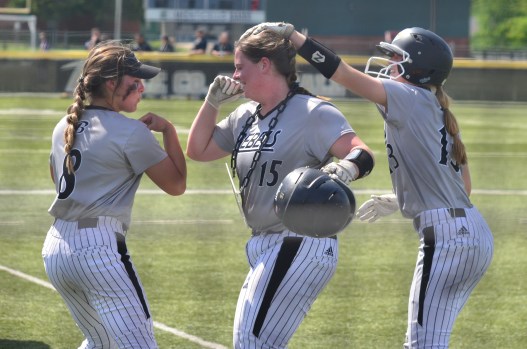 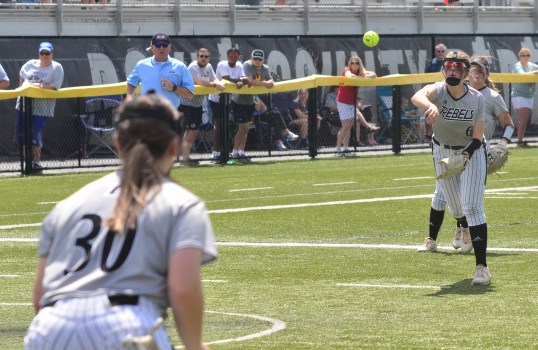 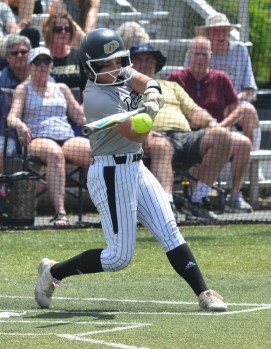 Summer Ray of Boyle County makes contact on a swing Sunday during the first inning of Boyle’s 15-0 victory over West Jessamine in a 12th Region Tournament semifinal. Ray was 5 for 6 in the Lady Rebels’ first two tournament games. Photo by Mike Marsee. 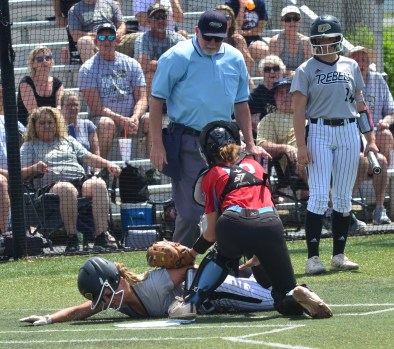 Summer Ray of Boyle County is tagged out at home plate by West Jessamine catcher Madison Green on Sunday during the first inning of Boyle’s 15-0 victory in a 12th Region Tournament semifinal. Photo by Mike Marsee.

The stakes are high, and so is the energy.

The hits and runs are piling up, and so are the pitcher’s strikeouts as Boyle County rolls toward another regional softball championship.

The Lady Rebels are feeling good and playing well, and there’s a buzz on the field and in the dugout as they edge closer to their goal.

“Energetic,” Boyle shortstop Summer Ray said. “I think that’s the first word I’d use, and I think if we can keep that up for the championship game we’ll see good results.”

Boyle defeated Wayne County 15-0 and West Jessamine 10-0 in the first two rounds of the 12th Region Tournament to move within one win of their fifth consecutive regional title.

“It’s postseason,” Ray said. “We’ve worked for this all year long, so now that it’s here, we’re full of energy.”

Energy is exactly what Boyle coach Brian Deem has been looking for.

“I think we’ve done a good job coming in and keeping our nerves at bay,” Deem said. “The things we’ve been harping on are just be who we are, stay smooth, but you’ve got to bring energy.”

Now the Lady Rebels are exactly where they want to be, playing for a regional championship on their home field. They will face Southwestern at 7 p.m. Monday at Rebel Stadium for a berth in the state tournament.

“If you get to finish on your home field, I think that’s pretty awesome, especially for our two seniors,” Ray said. “We want to go out with a bang.”

Monday night’s game will be the last at Rebel Stadium, which has been Boyle’s home since 2011. A new field is expected to be ready elsewhere on campus for the 2023 season.

If Boyle wins, Deem said, it will be the payoff for getting through a regular-season gauntlet of ranked opponents and tough tournaments.

“This is their reward for that,” Deem said. “They’ve already gone through the hard stuff, so let’s get a reward for it.”

No. 16 Boyle (25-9) put up 25 runs and 19 hits in nine innings in its regional games Saturday and Sunday, both of which were shortened by the mercy rule.

Ray, who is 5 for 6 from the leadoff spot, said Boyle’s hitters are relaxed.

“I think it’s honestly just staying calm at the plate,” she said. “Whenever we overthink we don’t produce. Whenever we just go up there and start playing the game we know, we start seeing those swings.”

Ray and Katie Qualls each went 3 for 3 on Sunday in Boyle’s semifinal win over West Jessamine.

On Saturday, Ray and White each went 2 for 3 and Tipton had a home run in the first-round win over Wayne. White drove in five of Boyle’s 15 runs, and Ray scored four times.

Meanwhile, White was on top of her game in the pitcher’s circle. She allowed only one hit in each game, striking out seven Wayne batters and 10 against West Jessamine.